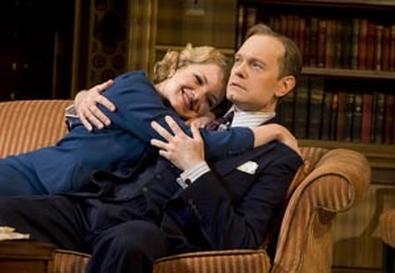 Photo Source: Joan Marcus
Samson Raphaelson's Accent on Youth is the kind of play for which the word chestnut was appropriated. No doubt titillating and somewhat sophisticated in its day, in 2009 it just creaks, groans, and lumbers its way across the stage of the former Biltmore Theatre despite the best efforts of a talented company. Manhattan Theatre Club's production proves the danger of indiscriminate archeology and engenders incredulity at the resources lavished upon it. What's next, a revival of Glad Tidings?

The story, such as it is, centers on fabulously successful Broadway playwright Steven Gaye, who has unwillingly reached his mid-50s. After 19 comedies, his latest play is a "tragedy," as it is all about an affair between an older man and a much younger woman. This ends up mirroring his own life when his 20-something secretary, the mousy Linda Brown, declares her love for him. Her declaration inspires a rewrite of the play that makes it a huge hit, and she ends up transformed into the play's glamorous star and Gaye's lover. He won't marry her because of the age difference. Complications, of course, ensue when her leading man, Dickie Reynolds, falls in love with her. With whom will she end up?

It's hard to understand what drew such heavyweight talents as director Daniel Sullivan and star David Hyde Pierce to this long-tarnished bauble. As the aging playwright, Pierce summons every ounce of charm he possesses and lands his share of faded bons mots, but there's little he can do to make this antique stereotype interesting. Mary Catherine Garrison is more comfortable as the quirky secretary than she is as the Broadway star, never making the character's glamorous transformation wholly believable. Byron Jennings as Frank Galloway, the hard-tippling male lead of Gaye's play, revisits familiar territory. We've seen him do this before in better plays with happier results. The handsome David Furr memorably bounces through the role of Dickie Reynolds as if awash in boyish testosterone, and the redoubtable Charles Kimbrough brings his unique brand of puckish charm to Gaye's faithful manservant, Flogdell. Both Rosie Benton as a young old flame of Gaye's and Lisa Banes as a vain, aging actress deliver the goods but are largely wasted in their small roles.

Sullivan keeps the proceedings moving at a decent clip but can't prevent a sense of detachment from pervading them. John Lee Beatty's impressively appointed duplex apartment interior seems just a little too sterile for Pierce's humane playwright: Would he really have such perfectly matched and seemingly unread books lining his walls? Jane Greenwood contributes appropriate period costumes, and Brian MacDevitt lights it all with unintrusive good taste.

By 1934, the year of Accent on Youth's premiere, Broadway had already seen such plays as Noël Coward's Design for Living and Private Lives, Philip Barry's Holiday, and George S. Kaufman and Edna Ferber's Dinner at Eight, to name but a few. Raphaelson's artificial comedy was second-tier then, and it hasn't improved with age.