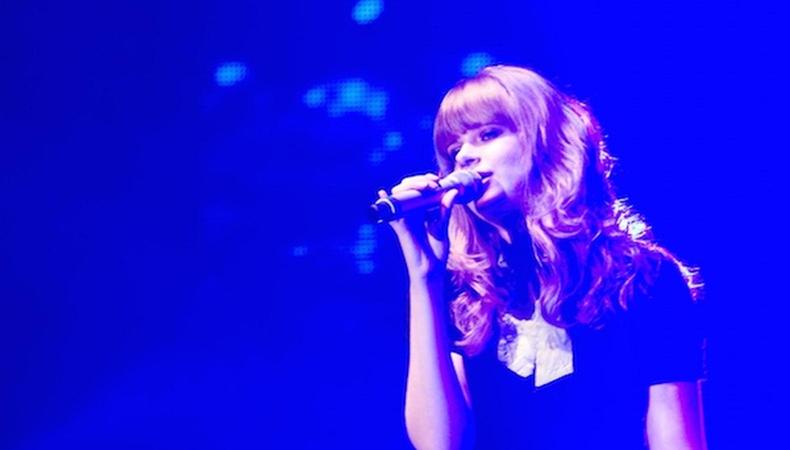 Vibrato is a small variation of pitch occurring spontaneously that results from the free oscillation of the vocal cords. A singer achieves a healthy vibrato by allowing for an open pharynx (open throat) while his/her vocal cords come together seamlessly without unnecessary holding/tension. It is the result of these opposing factors working together. Put simply: “Open throat, closed cords” results in vibrato. The term “vibrato” comes from the Italian word “vibrare,” meaning “to vibrate.”

There are many different kinds of vibrato singing that we hear, and different cultures often prefer different sounds. For example, the Indian culture prefers a very wide and fast vibrato. In China, for example, it is desirable to have a slower, wider vibrato. Certain French pop singers prefer a tighter, faster vibrato. These variances represent valid cultural sonic preferences, but none represent longterm healthy vocal technique.

How to Control Your Vibrato

Essential for a healthy, spontaneous vibrato is an even, consistent air pressure vibrating the vocal cords, or good breath support, in other words. The optimal amount and pressure of the air being moved past the cords is regulated by a singer’s support system (i.e., engagement of their abdominal oblique muscles, rectus abdominis muscles, transverse abdominis muscles, lower lumbar muscles, perineum (pelvic floor), and intercostal muscles).

Why Can't I Produce Vibrato?

Here are the most common issues singers have with vibrato:

A fast vibrato can be caused by a number of things. Lack of vocal cord approximation, meaning, the vocal cords not seamlessly coming together after inhalation can all result in a faster vibrato speed. There could be excess pressure at the base of the tongue. But what I find to be the most common reason a singer has an overly fast vibrato is lack of consistent, even breath support. His/her support often either sits too high with tension/squeezing or collapsing of the ribs, or there is an overriding sensation of the energy of support coming “up and in” to the body. This puts too much tension on the larynx and prevents the glottis from achieving a free, organic, and even vibrato. Singers can fix the problem by practicing technique exercises that focus the him/her on a much lower sensation of support down through the transverse abdominis muscle and engaging the pelvic floor while allowing the ribs to stay open and buoyant during phonation.

Vocal wobble—a slow and wide vibrato—is usually caused by a lack of proper resistance of the breath pressure or a lack of focus in the tone. In our culture, people with a vocal wobble are often said to sound like they are old. Yet the primary cause of a vocal wobble is generally improper use rather than the age of the singer. Young singers can develop wobbles out of misuse and singers in their later years can have no sign of a wobble due to many years of proper, healthy vocal technique. The solution to a vocal wobble is technique exercises that acquaint the singer with the feeling of consistent, even breath support.

Straight tone means no vibrato at all. Straight tone is achieved by an excess of pressure held at the glottis (the part of the larynx where the vocal cords live) to prevent vibrato from occurring. Many singers who sing with a straight tone have been required to do so by choir directors who have demanded that sound. This can be very damaging to the singers in their charge. Straight tone singing is extremely unhealthy for the voice. The amount of pressure on the cords to achieve a straight tone is incredibly fatiguing to the vocal cords. It is an enormous amount of tension placed on delicate cords and it doesn’t take long for damage to be done. Vocal nodules can result because of too much pressure held at the glottis to prevent vibrato from entering into the sound.

A diaphragmatic vibrato is created by the pulsating of the diaphragm while sustaining a note to create the impression of vibrato. This is a false vibrato. It is difficult to undo a diaphragmatic vibrato because the singer’s body has so deeply ingrained the sensation of pulsing his/her lower abdominals on every pitch that he/she equates it with his/her breath support and it can be difficult to disentangle. However, with lots of time and concentrated work, the habit can be reversed by going back to the basics of breath support to stabilize the pulsing, shaking diaphragm.

A healthy, properly regulated, and even vibrato is not as elusive as it may seem. It can be achieved with dedication to technique guided by an informed instructor—and, most importantly, by embracing the process rather than the product.

Arden Kaywin
Arden Kaywin is voice teacher, vocal coach, and vocal producer in Los Angeles with over 10 years experience working with developing singers and nearly 20 years as a professional singer herself. She holds a master’s degree in music and vocal performance from the Manhattan School of Music in NYC, where she studied classical voice and opera.
END_OF_DOCUMENT_TOKEN_TO_BE_REPLACED