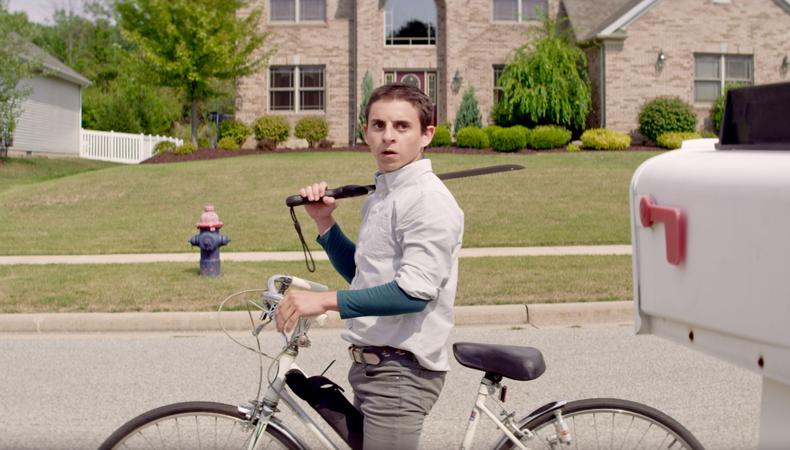 Still in his teens, Moises Arias is racking up the kind of performances actors twice his age would envy. The former "Hannah Montana" star will be seen later this year in the hotly anticipated sci-fi epic "Ender's Game" with Harrison Ford. And opening May 31 is the Sundance hit "Kings of Summer," about three boys who run away to live in a house in the woods. Arias steals scenes as the offbeat, eccentric Biaggio. The young actor spoke to Backstage about his blossoming career, and how he hopes to maintain it into old age.

Find a new take on a character.
Arias was shooting “Ender’s Game” when he was sent the script for “Kings of Summer,” then called “Toy’s House.” He was so busy, he only read the sides at first. “But when I saw the role of Biaggio I was like, ‘Whoa, what is this character? This is genius,’” he recalls. “I ended up reading the script and it was just so fantastic.” At the same time, he knew quirky sidekicks were a popular trope onscreen. “I wanted the character to not be a gimmick and someone you really cared for. If my character didn’t work, every time he appeared it would take you out of the story. Me and the writer and the director worked really hard to find that perfect balance.”

Overcome your shyness
Arias says he actually stumbled into an acting career while growing up in Atlanta, Georgia. “I was really shy when I was younger, so my mom got me into an acting class to see if I would open myself up more in front of an audience. Her plan was for me to just talk more.” Instead, the teachers urged him to try his luck in Los Angeles. “So we said, ‘Okay let’s go out there for three months and see what happens. We haven’t gone back in nine years now.’” Arias says he booked his first commercial within the first two months, and landed a role in the movie “Nacho Libre” within the first six months. “From there, it kind of kept rolling.” Still, he didn’t really think of it as a career until a few years later, around the time his job on the Disney show “Hannah Montana” was about to come to an end. “I needed to figure out where I was going after the show ended. Not a lot of people make that transition from child actor to bigger, better roles,” he says. “After the show ended, there were opportunities for me to have my own show and pilots I said no to because I wanted to wait for something that really just blows me away. And ‘Kings of Summer’ was one of those.”

Audition - even if the part doesn’t seem right.
Arias admits that when he was younger, there were many times he wanted to blow off auditions to hang out with friends. “Now that it’s a career and I’m focused on where I want to go, it’s a little different,” he says. He adds that there are times when he instantly knows he’s perfect for a part—Biaggio was such a case. “The character was described as offbeat, a little bit smaller, weird. And I just felt like I could get into that and really live that,” he says. “But with ‘Ender’s Game,’ the character was described as dark-hair, light eyes, six foot tall, bigger than everyone. I’m 5’1”. I’m basically the opposite of that. But I guess it just depends on the vision of the director and how much heart you put into it.”

Be willing to adjust your style.
Arias says that he works mainly on instinct, but that it truly depends on the character. “With Biaggio, improvisation was really encouraged so I played around a lot,” he says. “I was really loose.” But playing the intimidating antagonist in “Ender’s Game” was another story. “I actually stayed in character the whole time I was on set. I heard the extras were scared of me. I wasn’t doing it on purpose, I was just trying to stay in the mindset. At the end they finally started talking to me and admitted to me that I had scared them.”