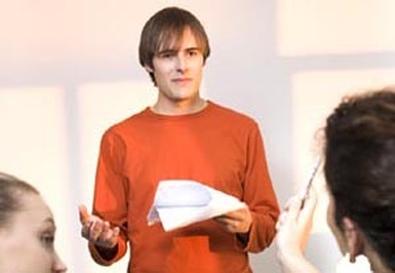 Comparisons, they happen. Especially in group settings such as the collaboration that is the performing arts. And they can destroy the harmony and productivity of any project.

The comparison can be a seemingly innocent thought, such as a dance captain musing to themselves that one the dancers in the theatrical company has a better extension. Or it can be a morale-damaging comment carelessly (or with malicious intent) spoken by a secondary role actor that they believe they have superior skills than the actor playing the leading role.

Comparisons do damage, whether spoken or silently pondered. While you may think comparing is helpful to better oneself, be careful. Human nature often goes towards the negative like a sexual compulsive to a bathhouse. Either situation—the chatting comparer, or the salacious sexual compulsive—leaves them feeling empty and less than their worth. Jealousies fester.

We all do comparisons of ourselves to others. My partner constantly reprimands me for diving into the infested waters of the comparison swamp. I'll comment about peers who I assume or know to have more profitable careers than I. And then I'll mope. For days. Sometimes weeks. Thinking 'I'm not good enough'.

When my high school friend Kevin Murphy (the creative behind "Mystery Science Theater 3000" and "Reefer Madness–The Musical") became an executive producer and writer for "Desperate Housewives," I wallowed in the soulless self-pity of 'Why can't that be me?' None of these actions were helpful to my moving forward in my goals. Nor was I a happy camper to be around in the company of others.

And this wallow and worry was also a major waste of time and energy. Energy that could have been put to better use elsewhere—like looking for new opportunities for growth. As I often say (but seldom follow), "Worry is a waste." Eventually I'll slap myself and stop what is essentially career momentum-stopping behavior.

We all have our moments, but when they build from moments to eras, then you need to fix your comparison problem.

Positive comparisons are fine, such as one actor complimenting another on their performance: "It's wonderful how you ground your character and keep the tension of the story. I'm learning much from your work!" With a comment similar to that, you're not only providing positive reinforcement to a fellow company member (who may be in their own comparison swamp), you're also displaying your desire for growth.

A potential negative comparison—like when one actor says to another in a regional theater setting: "Your comedic timing is fascinating. I'll never be as good as you"—opens a Pandora's box of trouble. It may have seemed that what was expressed was a compliment, but words have a funny way of being twisted, carrying meaning beyond what we intend.

Let's take a look at where the statement crashed.

First, the comment tag: "I'll never be as good as you" belittles your contributions and openly announces insecurities that others in the company will seize upon as a confessed weakness, which offers an invitation to be possibly used against you. Secondly, you empower the person to whom you're speaking. They may then think themselves far superior to you and consider you as persona non grata. And thirdly, the vagueness of the comment "fascinating" could be viewed as sarcasm by the recipient—a miscommunication that can foster and fester ill-will against you.

The comparison statement doesn't even have to be made by you to the person you admire, or are jealous of. Some people with insecurities—and that's the heart to where this problems stems from—will whisper to others in a company that they believe their skills to be far superior to someone else within the same company.

That "I'm better than so-and-so" statement then, like the childhood game of telephone, gets spread from one company member to another. The telling of the comparison changes as the information is disseminated and distorted between exchangers.

Eventually that gets brought to the attention of the person(s) you were comparing yourself to. And then there goes company moral. Unnecessary tensions build. Distrust breeds. And the negativity eventually manifests itself in production whether it is in rehearsal or performance.

Making comparisons is not healthy if you continually focus on your faults or the faults of others.

One of the traps in the comparison swamp is perception. While you may look at someone else who dabbles in your field of expertise and think them to be wildly successful, you never truly know what their life is like. To the public they may seem as if they have their shit together (accompanied by a healthy bank account), but in reality they may be just like you: in debt, comparing their career (or lack thereof) to someone else, and wishing their own were better.

The only good thing that comes out of comparison is if you use it to better yourself. Seed your ambition for a healthy harvest. And in a manner that is not spiteful but which enriches your spirit and skills. If you wallow in the "I wish that were me" tripe then you'll always be mired in the comparison swamp. Lost in the reeds. Drowning.

When the comparison thoughts surface in your cranium, think carefully before giving them a position of validity: Is it jealousy that prompted the thought, or is it a desire to better yourself?

If it's the former, toss the "I could be better than so-and-so..." thought away. If it's for the betterment of you and invigorates your ambition for improvement, then embrace and keep the thought to yourself while working on finding a way to be content with what you presently can develop or keep from your talents. You'll be a much happier artist if you do so.