5 Actors On Their Emmy-Worthy Years 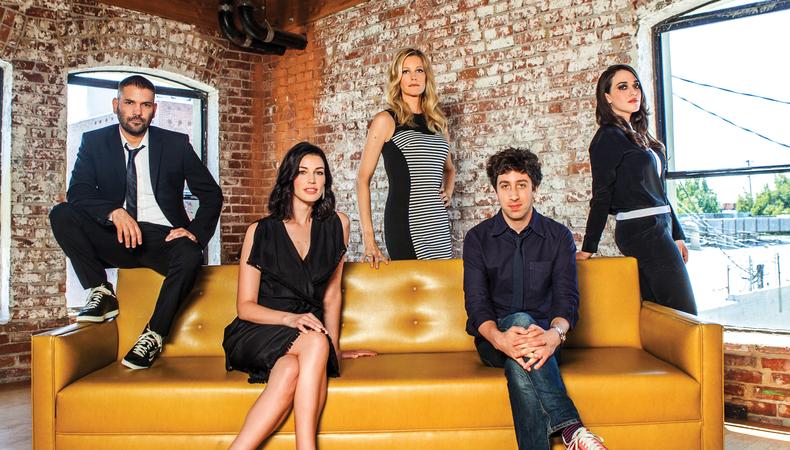 Kat Dennings’ most difficult scene on “2 Broke Girls” ended up cut from the show. Anna Gunn had to mime a sex act for her “Breaking Bad” audition. Simon Helberg turned down his first audition for “The Big Bang Theory.” Jessica Paré found out she was getting a proposal on “Mad Men” from someone in the prop department. Guillermo Diaz spent a day being waterboarded naked for “Scandal.” Those are just some of the revelations uncovered during Backstage’s third annual Emmy Roundtable, held in May in Hollywood. All five actors are coming off a terrific year on popular programs and spoke about landing their roles, their most difficult scenes, and when they realized their show was a hit.

How were all of you cast?
Kat Dennings: I got offered the role, which is a lucky break. I worked with Michael Patrick King when I was 13, on my first big job on “Sex and the City.” I played this bitchy girl having her bat mitzvah.

Were you looking to do television?
Dennings: I wasn’t, really. It was just kind of the perfect thing—it shoots near where I live, and it’s great. Sometimes you just don’t want to go to Canada anymore and shoot at 3 a.m. when you have the flu, for $2 a day. It’s such a luxury to work near where your family lives and actually make a little bit of cheddar. Just to be clear—I love Canada!

Simon Helberg: You don’t want to piss them off. Because when they get angry, they’re just a little less cheerful.

Guillermo Diaz: The script was sent to me and the character was described as a 50-year-old, nerdy, overweight guy. I called my manager and was like, “Guys?” They said to just go in; they knew who I was. I auditioned once for Shonda Rhimes, and the producers and I got it after the first audition.

So much has been revealed about your character; did you know much about Huck at the time?
Diaz: I think I was the one who knew the most about my character on the show because Shonda actually wrote an audition monologue for Huck. I’m describing my backstory and what I went through. So I actually knew quite a bit. The audition piece eventually ended up in one of the episodes, which she wasn’t sure she was going to do at first.

Simon, weren’t there two pilots for “The Big Bang Theory”?
Helberg: Yes; the first time it came around, they wanted me to audition for Sheldon, Jim Parsons’ role. I was very close to getting “Studio 60 on the Sunset Strip.” So I opened “Big Bang” and the audition was for the next morning and I saw Sheldon’s dialogue, which was like a four-page monologue. I couldn’t even wrap my mind around it, so I put all my eggs in the “Studio 60” basket, which I ended up getting, but not as a regular. The next year, “Big Bang” came around again, this time for the part of Howard. But I didn’t want to audition because I thought “Studio 60” was Aaron Sorkin’s show, it was doing OK, and I’d played so many nerds. I was convinced to audition and they wanted me to test, and I passed on testing. I think Chuck Lorre called my agent and asked why I wasn’t testing, and my agent said, “He’s on ‘Studio 60,’ and Chuck said, “But nobody watches that show.” So I went in to test. I tested the same night as Kaley Cuoco and the next morning I read she got the part. But I didn’t hear for a week. So I still kind of don’t know what happened in that week.

Anna Gunn: They might have just been on vacation.

Helberg: I’m not saying there was a knife fight over me. But I felt weird, like, Someone here doesn’t want me.

Did you tell Sorkin you were auditioning?
Helberg: I had to write Aaron saying, “I hope it’s OK—I have to test for this pilot, and if it gets picked up, I have to do it. But I’m so loyal to you, and if it doesn’t happen, I hope you’ll have me back.” He wrote back saying, “You little motherfucker…just kidding. You’ll have to pry the pen from my cold dead hands for me to stop writing for you.” Which was amazing. I kept that email.

Gunn: I had my second daughter three and a half months before, and I was exhausted and sick, and Sharon Bialy was trying to set up the meeting for me to read. She finally called me at home and said, “What the hell’s going on? Just get off the phone, read the script, and call me back.” So I went into my room and read the script and…there it was. I went in, and I think there were about three other women, and they gave us all 10 to 15 minutes to meet with Vince Gilligan and Bryan [Cranston] and work with them for that time. Of course, one of the scenes we did was the famous hand-job scene. Bryan and I sat down, and I said, “You know, I don’t want to do the silly miming thing.” So we worked out that we would put two chairs together, and I would give the chair a hand job while we sat and stared straight forward. We had such a good time with it that it felt like a comedy audition. It was great, immediate chemistry.

Helberg: You think it was the hand job that did it?

Gunn: Yes, I think the hand job sealed the deal.

Helberg: Isn’t that true for all of us, though?

Jessica, you joined a show that was already a huge success—did you have any idea how significant your character would turn out to be?
Jessica Paré: No. I think my character was just called “Brunette” at first. They said it would be three, four episodes, and I really needed a job and was excited to be on “Mad Men.” I didn’t read scenes written for the character; there were no scenes written for the character. I had three auditions and didn’t hear for a week either. I did something really nerdy that I never do in auditions. You know how it is when you go to audition after audition, and they just don’t care? I was doing a lot of those, and I go to this audition, and I got to really work on scenes from one of my favorite shows with Matt Weiner. It was 30 to 45 minutes long. So as I was leaving I said, “I never say this because I think it’s really cheesy, but it’s so nice to work on great scenes with somebody like you. It makes such a difference.” Then I closed the door and was like, “I fucked that up.”

Obviously not! At what point did you realize Don Draper was proposing to Megan?
Paré: What happened was, we were shooting 12 of 13, and the script was going to come on Monday, but the prop master had to come and measure my ring finger. He was like, “I don’t know how to do this without blowing it, so let’s just not talk about it.” I felt like it was an actual proposal. I was like, “Oh, my God!” I couldn’t hold still.

Did you feel secure in your job after the proposal?
Paré: No! Everyone was like, “For sure you’re going to be back.” I have two words for you: closed casket. They could open on a casket, pan to Don winking at a blonde. It was also a 17-month hiatus after that.

What was your biggest challenge of the last year or season?
Gunn: I had to do a scene where I walked into the pool. They had to teach me how to breathe with a regulator, and I’m a little claustrophobic. In order to show me floating in the deep end of the pool, they had to rig this wire cage and put this skirt I was wearing in it and drag me down into the cage. Our stunt guys and special effects people prepped me the day before, and they were amazing, but it was during the day, and it all seemed great. But when we shot it at four in the morning with a full crew, it was a very different experience, and you’re blinded by the lights in the pool, and I started to panic.

Paré: I can’t reveal anything coming up, but there was a scene where Megan talks about having a miscarriage. You know how it is when you have those juicy scenes; it’s not really hard—it’s what you live for. Sometimes it’s harder to just walk through a door like a normal person or drink a coffee in the background. But I did all of my scenes for that episode in one day, and there was a lot of bursting into tears in the script. It was all great up until the last one, where I just felt I had nothing more to give. I was done.

Helberg: The first three episodes of the season took place in outer space for me. I had to do all the physicality of being in outer space. I sat on this bicycle seat on a rig, so they kind of moved me, but I had to do all the slow-motion stuff while speaking at a normal pace. It was challenging for my brain to hit those rhythms while moving slowly and talking to a blank computer screen. It was literally acting in a vacuum.

Diaz: My character was waterboarded in the beginning of Season 2. The producers and directors came up to me before the episode to make sure I would be safe. We had a rehearsal, and I had to get on this plank with a towel on my face while they poured the water. On top of that, I had to be naked.

Dennings: Did you really feel like you were drowning?

Diaz: I did when we were rehearsing and figuring it out, but luckily props said they could line the towel with wax so when they were pouring water in my face it didn’t go in. It was a crazy, crazy day. I was in the middle of the room naked, being beat up and waterboarded, and felt very vulnerable.

Dennings: OK, anything I thought was hard doesn’t seem hard now. I have to follow waterboarding! The only thing that was physically challenging was I had to ride a horse in an amazing Vivienne Westwood corset gown and giant Louis Vuitton spike heels. I had to get up, and I told Michael I could not physically do it. It was terrible and terrifying, and then it got cut out, like I knew it would. But that’s a cakewalk compared to getting waterboarded or drowned in a cage.