Actors Perform With No Words In 'The Man Who Laughs' 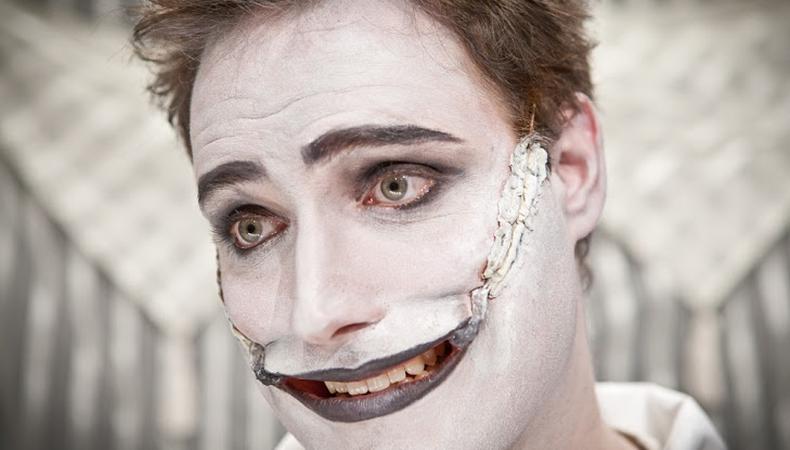 For some actors, practicing a stage kiss for the first time can be a nerve-wracking experience. For Dave Droxler, star of The Stolen Chair Theatre Company’s upcoming production of “The Man Who Laughs,” the task was downright impossible.

That’s because Droxler plays Gwynplaine, a man whose mouth was violently transfigured into a permanent grin. In order to embody the character’s disfiguration, Droxler wears a special prosthetic: a headgear that wraps around the back of his head, with hooks on either end that pull back the corners of his mouth into a smile.

“I’m going over to lean in for the kiss, and when I was trying to perk my lips up, basically my bottom lip was the only thing that would stick out because the mouthpiece was holding my mouth back so far that the only thing I could move was my bottom lip,” he said. “So I just looked like I was making some silly face.”

“The Man Who Laughs,” which begins performances Jan. 31 at Urban Stages, offers a host of physical challenges for its actors. Not only must its lead actor restrict himself to a single facial expression, but the show—which replicates a 1920s silent film—also has no dialogue whatsoever. Droxler and his fellow cast-mates—a collection of dancers, mimes, and even stunt-people—must rely heavily on their physicality to illustrate the emotional Victor Hugo-inspired tragedy.

Droxler explained how the combination of facial and vocal limitations forced him to communicate the entire gambit of Gwynplaine’s diverse emotions through his body alone.

“When you have this look of happiness, and [have] to try to relay that you’re upset, all of a sudden it becomes tricky because you have to somehow do it in the way you physically stand, or how you use your eyebrows, or how big your eyes are,” Droxler said. “It was definitely something that I was toying around with for a while to make sure that I was still able to relay all his different emotions."

Droxler, who’s onstage for all but ten minutes of the show, also has to cope with the physical discomfort of wearing the prosthetic. “I guess when it’s time to be upset and cry, that’ll probably be the easiest part because I’ll be in so much pain,” he joked.

But director Jon Stancato said that despite the challenge, absurd physical and vocal limitations can sometimes take an actor’s performance to a higher level.

“Somehow having that container allows them to focus more clearly on the character and the emotional beats of what they’re doing,” Stancato said.

He attested, for example, that there were aspects of the play that he didn’t understand until Droxler started wearing the mouthpiece.

“When we don’t wear the device and we’re just going through the story in rehearsal, I question a lot of the characters’ choices—they don’t seem to make sense to me,” Stancato said. “But when he wears the device, it all of a sudden clicks in and I say, ‘Oh, that’s why [Gwynplaine] feels this way.’”