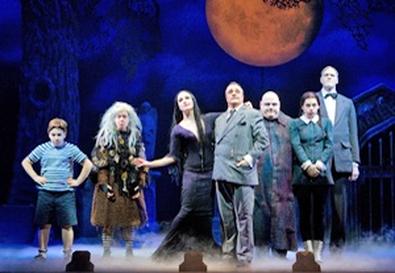 Photo Source: Joan Marcus
Imagine sitting down sporting your best finery in a grandly appointed dining hall to the promise of a sumptuous feast. The elegant butler has filled your glittering crystal wineglass with a pungent cabernet, the luscious lobster-bisque appetizer has been consumed, and it's time for the main course. With a flourish, the butler lifts the shining dome of a rococo sterling silver antique platter, only to reveal some strands of wilted lettuce, a few canned pear slices, and dripping dollops of cottage cheese. That's what it's like to watch "The Addams Family."

On the surface, it would seem that all the ingredients for a tasty hit have been assembled. The immensely talented company is well cast. British avant-garde wunderkinds Phelim McDermott and Julian Crouch have delivered a rich and imaginative set and costume design, lit alluringly and inventively by Natasha Katz, that incorporates ingenious puppetry from Basil Twist. Veteran Jerry Zaks is on board to tweak the avant-gardists' direction with Broadway zing, aided by choreographer Sergio Trujillo, who has proven he knows a thing or two about sizzle. Nothing's missing, right? Oh, wait, of course: the script and score.

"The Addams Family" is a musical all dressed up with no place to go. There's one simple reason: Nobody knew why they were writing it. There is no animating purpose to the evening, except to throw well-known characters on stage so the audience can luxuriate in their comforting familiarity. Charles Addams' iconic cartoon creations have been robbed of all subversiveness, something even the 1960s TV series—made in a considerably more socially conservative era—didn't do. The thin wisp of plot—daughter Wednesday wants to marry a "normal" boy from Ohio—in Marshall Brickman and Rick Elice's choppy book serves mostly to muddy the comic strip's iconography, and their inclusion of a subplot involving Morticia's fears of aging only compounds the problem. They've also come up with one of the flimsiest excuses for a chorus since Captain Jim romanced Rose Marie in the heyday of operetta.

Composer-lyricist Andrew Lippa has shown attractive showbiz proclivities in his earlier work, but the general purposelessness stymies him. With little plot or character to hang his songs on, he relies upon arbitrarily slotted single-idea comic list songs, so many that even Cole Porter would have had difficulty sustaining them. (Example: Why must Gomez sing a song listing the ways in which he loves Morticia halfway through Act 1? It's info we know before the show even starts.) Lippa's pastiche tunes evaporate as they leave the pit, and his lyrics rely too much on elaborate but uninventive rhyme schemes. In addition, the jokes fail to progressively top themselves, as they must in all good list songs.

Nathan Lane is a worthy successor to John Astin and Raul Julia as Gomez, but it's depressing to watch him bring his formidable musical comedy skills to bear on such unworthy material. Bebe Neuwirth is a dead ringer for Morticia and excels at her sepulchral charm, but she lacks the twinkle both Carolyn Jones and Angelica Huston gave the part.

Kevin Chamberlain, Jackie Hoffman, and Zachary James have Uncle Fester, Grandma, and Lurch down cold, and Adam Reigler is particularly good as the glowering Pugsley. As Wednesday, Krysta Rodriguez also glowers well and shows off a sturdy voice, but the role's emotional confusion undercuts her funereal characterization. Terrence Mann is wasted as the uptight Ohio father, while Wesley Taylor is saddled with an ill-defined role as Wednesday's intended. Only Carolee Carmello, as the perky Midwestern mom, who speaks in greeting-card couplets, manages to make an impression equal to Addams' characters, despite being saddled with a terrible song.

It pains me to say it, but this "Addams Family" has been reduced to a single snap.