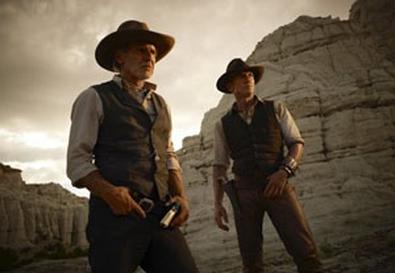 Photo Source: AP Photo/Universal Pictures/Timothy White
We're not ones who like to give advice, but there are a few things we've learned in our 19 years of working together that should serve anyone looking to write for genre TV and movies. And a forum devoted to everyone who loves Comic-Con just might be the perfect place to lay them out since we know we all have that love of genre in common.

The first question that comes to mind, however, is this: Isn't everything part of some genre? If our tips are in any way relevant, they should transcend all definitions. But because this is a special Comic-Con issue, we can at least agree that genre writing has something to do with being a fan.

So our philosophy can basically be expressed in a single sentence: A genre screenwriter must be both the child and the adult at the same time.

Hollywood is a business, and the laws of "adulthood" reign supreme. The clichés are true: It's a small town. One miss can kill you. Success has many fathers but failure only one. Not everyone who wants to make it will. Some people want you to fail.

So if you're lucky, there you are, trying to please everyone while not letting any of them know how terrified you really are. Hopefully your luck is the result of having written enough that you've learned the common knowledge the town expects you to have. You're past thinking that clever dialogue is all a screenplay really needs, never forgetting that story structure is more important -- and you no longer confuse structure and plot.

Hopefully you've accepted that the audience is always right, even if they can't articulate why, and that it is your job to interpret their reaction. You've figured out how to contribute to marketing and product-placement meetings (plus military-support meetings), and you've gained enough trust to build yourself a space. This is the space where you've pushed everything and everyone away, leaving you alone to … let the kid inside you play.

Like all kids, you'll be vaguely aware of the adult hovering to make sure you don't hurt yourself. But soon you forget you're being watched. The cynicism of product placement is replaced by the sense memory of actually playing with your toys. Sitting across from Harrison Ford during a script meeting, we were reminded that it wasn't just the movies that seared his chin scar into our memories -- we held his very likeness in our hands as 6-year-olds. Same with Optimus Prime and Mr. Spock.

A toy to an executive is an avatar to a child. And connecting those two mind-sets is key to storytelling as a screenwriting grown-up.

Later, as preteens, we dropped the action figures for straight role-playing, taking toy guns in hand and pretending to be James Bond. Flash forward a few decades to Santa Fe, N.M., on the "Cowboys & Aliens" set, watching Daniel Craig -- in full cowboy attire -- holster his six-shooter in favor of a laser gun.

It's funny how as kids we made up stories for those characters every time we played, but we never bothered to write them down.

Now we write them all down. And our action figures are actual size.

Trying to break into Hollywood as a screenwriter has always had elements of a fantasy role-playing game. Persistence, wisdom, talent and chance combine in just the right mix for the rare few who advance upward through difficult levels of the industry to achieve long-dreamed-of success. The five scribes profiled here -- Gary Whitta, Ashley Edward Miller & Zack Stentz, Marc Guggenheim and Dave Callaham -- are among a new crop who have collected enough hit points to go from the floor of Comic-Con to its stage.

Long before they co-wrote two movies – "Thor" and "X-Men: First Class" -- that together have grossed $786 million this summer, Miller and Stentz were waging battle in a geek chatroom. "We were on the same side of the "Star Trek" versus "Babylon 5" flame war of the '90s," says Stentz, 41. "We realized how eerily similar our voices were, despite living on opposite coasts. He had me at 'Hello.' " Now Miller, 40, comes in from Glendale and Stentz from Encino to Art's Deli in Studio City to outline stories on place mats.

Their first job, on Gene Roddenberry's Sci Fi Channel series "Andromeda," cemented an essential trait of the duo. "When the opportunity presented itself, we didn't screw around," says Miller. "We pitched seven stories; they bought five, gave us an audition, and we practically finished writing the first draft as we were breaking it. There was no room for error."

Work on "The Twilight Zone," "Terminator: The Sarah Connor Chronicles" and "Fringe" followed, plus a feature gig co-writing "Agent Cody Banks" for MGM. But the real career booster was "First Class," which Miller and Stentz rewrote for Fox in 10 days in 2009. "We wrote like crazy people," says Stentz. "TV experience helped a lot with that because it teaches you to make decisions quickly."

The pair has also turned their quicksilver attention to the sci-fi comic adaptation "Damn Nation" for Paramount and a mysterious disaster project for Skydance Productions. "Hollywood runs on fear," Miller says. "That is a worm that eats at their mind. What people respond to is confidence. That's one thing Zack and I bring."

In 1999, Callaham, an English major at the University of Michigan, came to L.A. and reluctantly landed a job as an assistant at CAA, where he discovered he had access to libraries full of scripts. Working at the agency turned out to be better than film school. When Callaham's long-term girlfriend dumped him, the breakup fired a switch from writing comedy to penning a twisted serial-killer thriller titled Horsemen, a dark story that Michael Bay eventually produced for Lionsgate in 2009.

Career therapy, more like. Universal signed him to a blind deal to write an adaptation of the video game Doom as well as a script that became "The Expendables." "The thing I had going for me is I was so hungry, young and full of fire, writing 16-hour days till 4 a.m.," he says. "Every single person I met was writing screenplays; a lot of them were at film school. That ability to outwork everybody else out there is what got me here."

That work schedule lately has included writing a sci-fi project for McG at Fox and the Godzilla reboot for director Gareth Edwards at Warner Bros. and Legendary Pictures. But like any bona fide geek, Callaham's Hollywood income gets funneled to the essentials. "I have a lot of Star Wars Legos -- that's my decor of choice," he says. "And other stuff costing more than I should be spending on it, like the Millennium Falcon I have is giant -- the size of a dog."

A London childhood spent gorging on "Star Trek" and "Knight Rider" led Whitta, 39, to an early career as a video game critic and editor of publications such as "PC Gamer" and "Total Movie." When the latter magazine folded in 2001, Whitta turned to his longtime ambition. "I figured, 'I have no excuses now,' " he says. "So I sat down and wrote a bunch of screenplays, each one less horrendous than the last."

An original script for a supernatural detective story called "Reaper" got him attention while he leveraged his gaming contacts to write for the video games "Prey" and "Gears of War." Whitta says the key was being prolific and not being "a one-trick pony. I pitched a bunch of ideas until they said, 'Write that.' And that was the first thing I sold."

Eventually, Whitta wrote a sci-fi movie with religious undertones called "The Book of Eli," which attracted the attention of the Hughes brothers and Denzel Washington. It went on to gross $157 million worldwide for Warner Bros. in 2010 and led to gigs writing "The Defenders" for producers Alex Kurtzman and Roberto Orci at DreamWorks, the animated sci-fi film "New Kid" for Paramount and "One Thousand A.E." for Will Smith and M. Night Shyamalan at Columbia.

"I always give people the same advice: Don't believe too much what you read in the rules about what you can and can't do," Whitta says. "Screenwriting teachers will charge you a lot of money for their secrets, and they tell you, 'You can never do these things.' I say, 'Here's a spec that did about five of them and sold.' In my case, it was just persistence and a little bit of ability. You've got to be able to take rejection and keep going. If you're any good at all, you'll be recognized."

Like "Aquaman," the comic book hero he penned stories for early in his career, Guggenheim is very comfortable switching habitats. He's written comics ("The Flash," "Spider-Man"), worked on TV shows ("No Ordinary Family," "Eli Stone") and co-scripted the movie "Green Lantern" -- but only after writing many legal briefs as a Boston attorney (which led to writing a 2001 episode of "The Practice" for David E. Kelley).

"It's funny: I grew up being too nerdy to be one of the cool kids, but I wasn't nerdy enough to be one of the nerd kids," says Guggenheim, 40. "I've straddled the different worlds. When I write comics, I try to bring sensibility that I learned from television, and when I write movies, I bring things I learn from comics."

Guggenheim knows all the tricks of the trade, but he recommends that aspiring writers focus on the trade, not the tricks. "Too many writers finish something, and then it's all about selling it or getting an agent," he says. "No, just finish one script and start writing another. Agents and sales will come in due course. It should be about building a career, not just selling one script."

On Guggenheim's agenda are a historical adventure called "Leonardo da Vinci and the Soldiers of Forever" that reimagines the iconic artist as an action hero and the long-gestating DC comics adaptation "The Flash," both for Warner Bros. He's also working on a treatment for a "Green Lantern" sequel with his original co-writers.

"It wasn't until I wrote my sixth script that things started to click," Guggenheim says. "I describe it as like learning to drive: After a couple years, you just drive -- you don't think. Success and failure are both a little accidental. So much of it is not in your control. All you can control is the story."