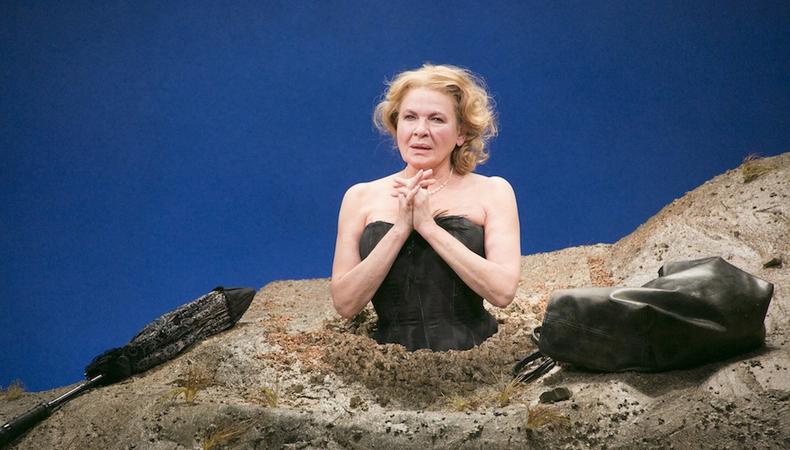 I was hired as Dianne’s “movement coach,” an ironic title for this particular play. I am on the faculty of Yale School of Drama where I teach Alexander Technique and Breathing Coordination. In preparation for this project, I worked with Dianne both privately and in rehearsal. As the work evolved, so did our understanding of the multiple, nuanced demands we had to address so that Dianne could sustain her performance.

The challenges of this show are unique. Winnie is on stage and speaking the entire play, only interrupted by brief appearances from her husband, Willie. In the first act, Winnie is buried to her waist in a mound of earth. In the second act, she is buried to her neck; only her head is visible to the audience. As Catherine Sheehy, the production’s dramaturg noted, Winnie’s cheery disposition despite her immobility demonstrates “the triumph of [her] temperament over topography.” While Winnie’s confinement on stage did not allow for a single step of movement, Dianne had to maintain an active inner life to propel the story forward.

In the beginning, our primary concern was that Winnie’s inability to move or change positions would eventually cause Dianne pain. Human beings are not designed to hold postures. Part of my work involved finding creative and practical solutions in the set design to provide Dianne greater ease and comfort. The production team read a chapter from Galen Cranz’s “The Chair: Rethinking Culture, Body, and Design,” a book about the synergy between body-conscious design and human activity. Cranz asserts that the dynamic “perch position”—halfway between sitting and standing—is most efficient for maintaining good use. I suggested Dianne perch on a high stool in the second act when only her head is visible to the audience. The seat tilts forward to encourage length along her spine.

Additionally, I asked the set designer to build a bar inside the mound on which Dianne can rest her hands, like Alexander’s procedure “Hands on the Back of the Chair.” This helps her find opposition to widen her back. Despite limited space, Dianne has full access to her three-dimensional torso and her breath moves freely. The expressive quality of Dianne’s movements enhances her spatial orientation in Winnie’s small kinesphere. She is like an open vessel and formed a relationship to the world around her.

In each lesson, I determined which Alexander Technique principles would most benefit Dianne at every stage of her process. People who are required to stand for extended periods of time often unconsciously lock their knees. To avoid this potential problem, we continually investigated monkey, which is known as the “position of mechanical advantage” in the Alexander Technique. I taught Dianne how to fold at her hip, knee, and ankle joints, and swivel over her feet so her torso could be free to move forward over her legs. We explored releasing her weight down to gain support from the ground. This balance expands her torso and frees her breath and voice. Bringing awareness to her lower body was very important because we were concerned her legs might go numb after standing for several hours during rehearsals. We also found it helpful for Dianne to wear comfortable shoes and stand on a cushioned mat.

Beckett’s script specifies physical actions for his actors to perform. In the first act, for instance, Beckett instructs Winnie to hold her parasol above her head to shield herself from the glaring sun for an extended length of time. Whenever anyone holds an arm up, there is a tendency to tighten the shoulders. Even Winnie acknowledges this strain: “Holding up wearies the arm.”

Despite Winnie’s discomfort, Dianne and I had to find a way for Dianne to feel comfortable holding her arms up for several minutes. I helped her eliminate the possibility of tension by teaching her to support her arm with the big muscles of her back and allow her shoulder girdle to float on top of her ribs. The shoulder girdle is a flexible structure and its mobility is largely determined by the support from the torso. As we breathe, our lungs subtly change shape, making it important not to stiffen the upper back. To avoid tension from forcing her shoulders back and down, Dianne allows the natural curves of her spine to lengthen. Her shoulder girdle glides effortlessly, and she sustains the weight of the parasol with ease.

Dianne wanted to achieve flexibility and stamina throughout the run of the show. This was going to be particularly challenging in the second act when she is buried up to her neck, leaving just her head visible to the audience. Only her face could move. Dianne wanted to learn how to avoid developing jaw tension and headaches. Procedures from the Alexander Technique were particularly helpful in addressing these concerns. We identified Dianne’s head-neck relationship by locating her atlantooccipital joint. She learned to release her sub-occipital muscles and find her head poised on top of her spine. Even in her stillest moments on stage when only her eyes are moving, she is able to renew the thought of freeing her neck. I am tickled every time I watch Dianne on stage smile, pout her lips, stick out her tongue, and shrug her eyebrows. Dianne’s freedom makes her portrayal of Winnie utterly singular.

For me, one of the most arresting moments of Dianne’s performance occurs right after the curtain rises to begin the play. Winnie is asleep in the blazing heat with her upper body extended over the mound. After a loud bell, she awakes and exclaims, “Another heavenly day.” Dianne initiates this movement from her head: turning toward the sky, opening her arms and spiraling upward. She uses the subtle swivel of her ankle and hip joints to achieve a full extension of arms and an open chest, as though she is embracing the entire world. Director James Bundy wanted minimal movement so that the story would be told in “simple physical action with complicated characters and their fragile memories.” Dianne articulates even the smallest of gestures with freedom.

In many ways, these lessons with Dianne epitomize for me the benefits of the work to which I have dedicated my life. Winnie is one the most challenging and immobile roles an actor can undertake. Dianne, with her fortitude and extraordinary talent, finds harmony of breath and body so she can fully live out Winnie’s story performance after performance. In summing up her experience of our work, Dianne said, “I am not walking behind myself. I am inside myself.”

Dianne Wiest’s acting career spans theater, film and television. She is the recipient of an Obie and Theatre World Award for her stage work, two Oscars for her film work, and two Emmys for her television work.

Jessica Wolf (ACAT 1977, M.AmSAT) is Associate Professor Adjunct of Acting at Yale School of Drama and the creator of Jessica Wolf’s Art of Breathing. In 2013, she created the first three-dimensional animation of the respiratory system and published a collection of her articles. Jessica travels extensively, both nationally and internationally, teaching workshops and presenting at conferences. She maintains a private practice in New York City.