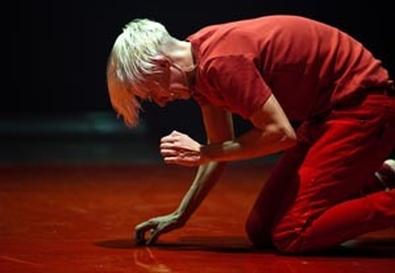 Photo Source: Valentina Bianchi
Ancient and contemporary drama collide in "Alexis. A Greek Tragedy," a jagged and ultimately moving political-theater collage created by the Italian troupe Motus and being presented by La MaMa ETC and the Public Theater as part of the Under the Radar Festival. The piece is part of the group's ongoing project to explore the "Antigone" legend. Here, scenes of the fiery daughter of Oedipus clashing with the dictatorial ruler Creon are juxtaposed with meditations on the real-life shooting of the titular teenage boy by Athens police in 2008. The parallels are striking. Antigone defies the stern laws of her country by giving her dead brother, Polynices, who has been labeled a traitor for political reasons by Creon, an honorable burial. Likewise, the protest movement of modern Greece seeks to come to terms with Alexis' death and employs him as a symbol of its anger at the government, with demonstrators setting a huge Christmas tree in Athens' commercial district on fire.

The four actors relate their personal involvement with the shooting in Italian (English subtitles are provided). These observations are interspersed with videos of interviews with Greek intellectuals, cultural leaders, and average citizens. This sounds like there's a lot going on at LaMaMa's Ellen Stewart Theater, but it's not too much. At first the piece feels more than a bit scattered. It opens with the blond, faunlike Silvia Calderoni moving in front of a row of blazing yellow lights while swinging her head up and down, rock music blaring into her headphones, as other members of the cast, playing police and protestors, rush on and off. She finally finishes her intense head-rush dance and launches into a harrowing monologue about running from authority figures—it could be about Antigone or Alexis—while pushing the video projector all around the vast space with images of flight flashing on the walls and into the audience.

For much of the first half of this 70-minute piece the stage is in darkness, and we only hear the voices of the cast as they comment on the video images of Athens, the volatile political situation in Greece specifically and Europe as a whole, and the difference between reality and theater. "It's a bit strange seeing this re-created on stage," says actor Alexia Sarantopoulou, who was in the city at the time of Alexis' death and delivers a simple and direct recollection of Athens as a war zone. Gradually, the lights come up and we get to know the performers and their passion for art and politics.

The skinny Calderoni is like a blazing political Ariel, deceptively powerful when standing up to Benno Steinegger's smug Creon, then clinically deconstructing her technique without missing a beat. Vladimir Aleksic literally throws himself into the roles of Polynices and Alexis, re-enacting the death of both young men several times in a scary dance of defiance. Sarantopoulou does not participate in the "Antigone" scenes but serves as a kind of dry-eyed, cynical observer of the proceedings, which she does with dry wit. Motus co-founders Enrico Casagrande and Daniela Nicolò did the muscular direction for this insightful and powerful study of the intersection of art and politics.