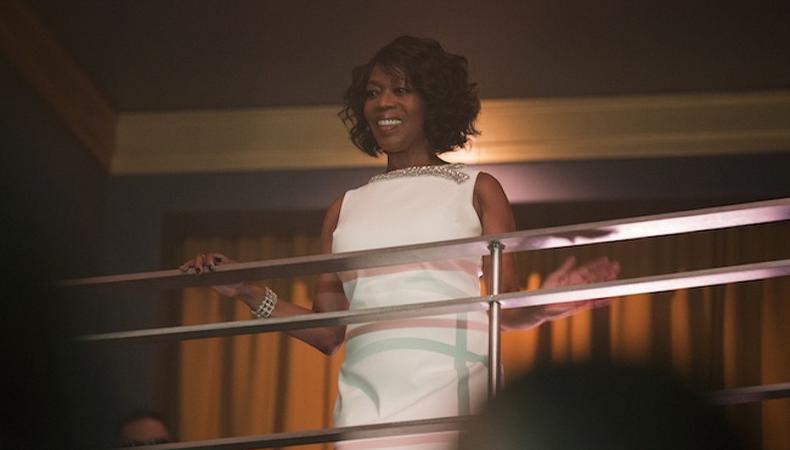 Alfre Woodard has long been one of the busiest working actors of her generation, and she’s got four Emmys, three SAG Awards, and an Oscar nomination to show for it. Jumping into the Marvel universe, however, didn’t seem like the most obvious choice for the stage and screen vet. But she says “Luke Cage” creator Cheo Hodari Coker’s scripts were enough to warm her to playing councilwoman-turned-Harlem crime queen Mariah Dillard in Seasons 1 and 2 of the Netflix series, the latter of which premiered June 22. “If you do not feel strongly about a script, do not do it,” Woodard advises. The actor recently sat with Backstage to discuss the project, her training roots, and going toward what scares her.

With acting, specificity is key.
“It’s up to us, even if it’s within the certain parameters that we get asked to work in, to find a new expression of that type of person every time we’re asked. Of all of the billions of people born, nobody has the same fingerprints. So when you stand a character [up], our job is to find as specifically as possible what makes you different from any other person.”

Trust in yourself—your gift is there. Hone it.
“That training is there. It’s in my muscles. It’s nothing I think about. The thing that you’ll find is if you train well, you take who you are and your instincts and then you hone it into a skill. But when you’re on your feet and they say ‘action,’ you stay as honest as possible while still trusting your instincts. It all works together. I think a young actor already is who they are as an actor. Maybe the longer you do it, the more you get out of your way, but what you’re doing is trusting what was already there. Your progress happens because of how more readily you surrender.”

You’re the only one who can tell you your worth.
“When we say ‘successes,’ we’re not talking about other people [saying] we did something great. We’re talking about whether we know it ourselves when we walk offstage or when they say ‘cut.’ You know when you did it…. That’s the success, when you know.”

Auditions are your time; use them wisely.
“What you’re doing is you’re showing up to say, ‘This is what’s possible.’ And they decide if they want to use you as part of their sentence structure that they’re making. If they don’t, that’s fine, and you walk away. But you don’t give up your power. Yes, you might be nervous; yes, you might really want it. But what you want is not to be accepted. You can talk to yourself about this however you can, but what you want is to be able to express. You have to feel: ‘I can express that right there. I’m gonna do you a solid. I’m gonna help you because I can express this.’ And that’s what it is. Every time you audition, it’s a day at work. You wanna keep working. That’s how we refine our craft. You keep doing it.”

Woodard invites you to learn from her.
“I just want you guys to know, just trust me: Whatever seems that scary or that formidable, it really isn’t. You have your value, you have your calling, and you can claim it right now. You know how they say there are no small parts? There are no young actors. Everything you have experienced that has brought you to this point has been studied and has been a place for you to put all the life that you’ve already led.”

Want to get to work on Netflix? Check out Backstage’s TV audition listings!

Benjamin Lindsay
Benjamin Lindsay is managing editor at Backstage, where if you’re reading it in our magazine, he’s written or edited it first. He’s also producer and host of a number of our digital interview series, including our inaugural on-camera segment, Backstage Live.
END_OF_DOCUMENT_TOKEN_TO_BE_REPLACED