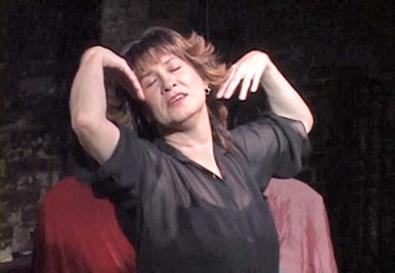 After 13 years on the road doing standup comedy to drunken audiences, I decided to move to New York to create my own solo show. A good idea, except I had yet to learn an essential fact: Solo theater is not standup comedy. Solo theater is acting. You take the emotional journey—as every character in the play. If your play is autobiographical (and first solo shows often are), then one of the characters is you.

The first challenge in solo theater is learning how to be yourself on stage. The second is bringing ensemble acting skills to solo performance.

When You're Also the Writer

A major difference between a solo show and a play for multiple actors is in the writing, which must be tooled differently. Doing dialogue by yourself requires either longer speeches, shorter scenes, or both. You must build your physical reaction to what Character A said into the beginning of Character B's response. This can't all be accomplished at the keyboard.

Actor-writers who are developing a solo show learn to rewrite in rehearsal, and it is one of the most satisfying parts of the process. After all, the writer and the actor in you share a common love of language, a passionate desire to communicate, a wish to be appreciated. You have to write dialogue that supports the way you have to act it. You want to switch characters, bodies, intentions with a minimum of fuss and bother. As you practice doing dialogue alone, it becomes clear what will work and what won't.

There are areas in which the writer and the actor part company. The writer refines the words, the shape, and the rhythm. The actor is seeking to embody the text. My acting teacher Carol Fox Prescott often said to me, as I worked my solo show in her class, "The writer needs to let the actor have the show now."

She was right, of course. She often was—but not always. One day she side-coached me with one approach after another, and I struggled and resisted, until she finally shouted, "Are you willing for me to be wrong?" That novel question stopped me cold. Was I willing for her to be wrong? No, I wasn't. I had made her my authority figure. I counted on her to tell me if I was right or wrong. As I contemplated her question, I realized I had to take the authority. I had to own my own technique, my own ideas. I had to drive the car.

This is where solo performers live. You're not totally alone, of course. You need the same support system as any actor: director, designers, choreographers, musicians, not to mention producers and investors. But in the self-written solo theater piece, the principal drive and authority must come from you.

So let's assume you've finished the rewriting. Now it's time to move fully into rehearsal. You take the stage. It's time to create a world by yourself. How do you do it?

Let's consider dialogue. Novice solo performers sometimes doubt the audience's ability to imagine the scene. They bounce about on stage, assuming first one character's position and then another's. This is unnecessary and distracting. If the character is well defined—by body language, tone of voice, rhythm, and style of movement—the audience will know exactly who is talking. Change of speaker can be indicated with the slightest of head inclinations, or sometimes none at all.

Most solo shows involve playing multiple characters. Each one has intention and desire, and those desires are often in conflict. (Wow, just like classic theater.) How do you become each character in rapid succession? It requires a powerful focus, an ability to run both characters' sides of the scene at the same time in your head. You may find yourself siding first with one character and then another. You'll make discoveries: Maybe your mother was right to give you a whack. Could be you deserved it.

Or you have despicable Character A, who takes advantage of Character B. The challenge is to love Character A, to identify with his very real human desires, no matter how extreme they may be. The joy lies in that challenge. There's pleasure to be found in being both the perpetrator and the victim, and there's satisfaction when the audience says afterward, "Wow, he was so awful." It's fun to remind them, "That was me, you know," and to hear them respond, "But he didn't look like you." That's because they saw a scene between two people.

Many solo shows make use of narration. Some use it to move from scene to scene or to establish settings. In some, the narrative element is the dominant one. In either case, you're addressing someone. Who is it? Sometimes you are literally talking to the audience. Sometimes the audience stands in for other characters. You also have to know why you're talking to them. It's the Passover question: Why is tonight different from any other night? Am I confiding in the audience? Am I talking to myself? Has the audience magically joined me inside my head? All of these are possible.

You have to have a sense of joy and playfulness to work alone. It's where you get your energy. And it's where you get variety in your performance. With no one on the stage to provide an unexpected response, you have to find in yourself that sense of adventure and discovery. But it's a good thing. It's your chance to be a kid again, playing make-believe by yourself in the basement or the yard.

And, just like a child, you have to have stamina. Whether you're playing one character or many, yourself or other people, you'll have emotional ups and downs. You gather momentum as you move along, the emotional residue builds, and your energy waxes and wanes. Like a marathon runner, you have to practice regularly, learn where your energy fades, and develop staying power. You've chosen to work solo, and there's no going backstage until the show is over. It's you, baby, on your own.

Then there's the wild card—the audience. Many solo artists work in small theaters, where you can see the faces in the crowd. This can lead to fear of judgment and rejection. But as my good friend Rob Bartlett counseled me in my standup years, "You have the audience from the beginning. The trick is not to lose them."

He was right. The audience members spent time and money to be with you. They hope it was a good idea. That's the key to solo theater: Keep them with you. The audience is your travel companion. Give up the fourth-wall ideas that would keep you isolated. This is a group experience—a mosh pit of the mind. Throw yourself into it.


Cheryl King is the creator and producing director of Stage Left Studio in New York City, was resident acting coach at "All My Children" from 2007 to 2010, and is a playwright, director, and actor. Her solo show "not a nice girl" enjoyed extended runs in New York City and Los Angeles. She most recently directed two solo shows: Frank Blocker's Drama Desk–nominated "Southern Gothic Novel" and Taren Sterry's "180 Days" (www.cherylkingproductions.com, www.stageleftstudio.net).