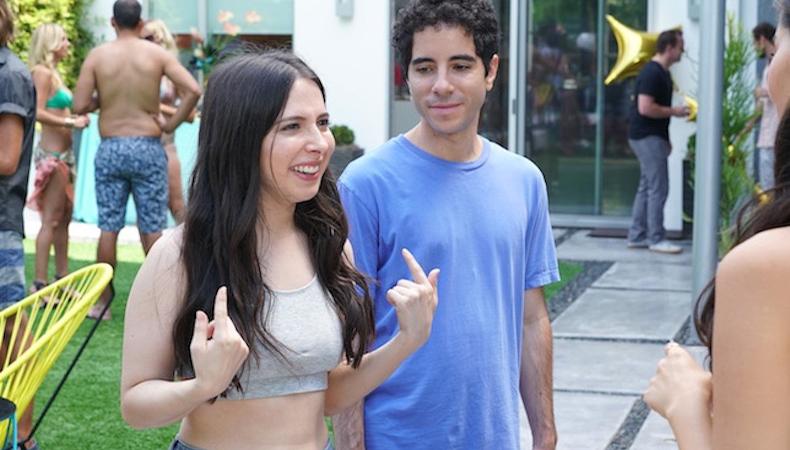 At 21, Esther Povitsky dropped out of college to move from her native Chicago to Los Angeles to pursue comedy. She threw herself into L.A.’s comedy scene and scored roles on “Jimmy Kimmel Live!”, “Key & Peele,” plus recurring parts on “Crazy Ex-Girlfriend,” and “Love.” Now, Povitsky is getting a show of her own. Based on a short film that she wrote, starred in, and produced, “Alone Together” centers on her and co-star and co-creator Benji Aflalo’s friendship in a self-involved world. Before the show’s Jan. 10 premiere on Freeform, Povitsky speaks on what it’s like playing yourself on TV and dealing with rejection.

What has playing yourself on “Alone Together” added to your acting skills?
Sometimes, you have to do the character version of yourself, which is maybe a little more desperate—me, if I was going to be more upfront about how desperate I am. We have an episode where I’m trying to date my best friend’s older brother, which my best friend really does have an older brother who I always thought was really hot and I dreamed about being with him but that was never going to be in the cards. In real life, I never tried anything because this hot, older dude would never be into me. But in the show, the person I’m playing is me but also thinks there really is a chance. You have to be you but really, really try to get what you want, a little more than you normally would.

What special skills do you have listed on your résumé?
I grew up doing theater so you’re trained to write whatever you think you can do that will get you noticed. I definitely have dance on there, I was a dance major in college. I always thought I was going to be a professional dancer. There’s probably British accent [on there], which I definitely can’t do.

Would you ever incorporate dance into your standup or is it too hokey?
People are always encouraging me to, but I have a hard time finding a way to do it without being hokey. But in “Alone Together,” there’s a couple dance scenes that we shot. There’s a girl sleepover and we choreograph a dance.

What advice would you give your younger self?
“Keep going, do it.” I moved home from college on my 21st birthday. I got my partial refund for the second semester and drove home. My parents were really sad. My mom never went to college so it was her dream to watch me graduate from school. I woke up the next day and I freaked out. I was like, “What have I done?” I obsessively started Googling community colleges in California and even in my hometown. I don’t want to say, “It’s OK” or “It’s going to be OK” because people who think it’s going to be OK chill out—or at least I would.

What is your worst audition story?
I was so bad at auditioning for five years. It really is its own skill and I don’t think everyone tells you that. I also don’t get a lot of auditions because I’m a very specific type, so it took me many years to get good at it and learn it. There was one audition, it was a callback for a movie, and I did my scene and at the end of it, the casting director asked me to do some of my stand-up. And I was like, “No?” It really caught me off guard. Standup is a thing I do at a comedy club or at a fricking laundromat with a microphone, but random people there? I couldn’t do it for some reason. It would feel too humiliating.

How do you keep your head up through the rejection?
Rejection is, low-key, the hardest thing. And I feel like no one talks about it as much. I remember one of the first things my dad said to me when I moved out here, he said, “Rejection is your strongest suit.” Which is kind of funny because what about my comedy? But just hearing him say that and reminding myself that every time I get a no, that’s my strength—I can take that no and keep going. Maybe I’m not always the prettiest person auditioning, or even the best person auditioning, but as long as I can take those no’s, I can control that. That doesn’t mean that it doesn’t still hurt, but it’s almost like a sport: the more you get rejected, the better you are at it.

What was your most memorable survival job?
I always had at least three jobs at any given time. I worked at Equinox, I worked at a juice shop, I was an assistant to a woman who just broke up with her boyfriend, I was a part-time nanny. I trained to be a waitress for two weeks at the Hollywood Hard Rock Cafe and the day before they opened, they let me go. The first day, I met a guy and we dated for the two weeks and it was really funny. I had a two-week Hard Rock Cafe training fling. I [also] got really obsessive over the pins you could collect there. I also worked at Johnny Rockets—actually worked there, I didn’t just train.

What was the process of expanding “Alone Together” from a short to a TV series?
We always knew that our goal was to have a TV series. So we shot this with that in mind but we wanted something to live on the internet that was representative of our relationship and our place in the world, regardless of what ended up happening with the project. We shopped it around town thinking we’d get meetings with production companies, and then everyone was like, “No, thank you,” except for one company, which was the Lonely Island’s company. We had a really awesome meeting and we were like, “FYI, no one else will meet with us.” At first, we were like, “We’ve really got to play the game.” As soon as we walked in, we sat on the couch and were super honest about it. We ended up working with the Lonely Island and we pitched it and we sold it everywhere we pitched it and we ended up at Freeform and now we have two seasons.

I imagine it’s hard to find development teams who are on the same page as you, comedically, given the wide variety of things people find funny.
That’s so true, it’s so hard. Just like with standup, I’ll have certain jokes that will work at the Comedy Store one night and the next night they won’t, and then they’ll work at the Improv and won’t work at the Laugh Factory, and vice versa. It’s the same thing when you send out your short film or when you sit down and take a meeting. It’s all about chemistry amongst people and who’s going to get you. It only took one person to get us and that was the development people at the Lonely Island. It didn’t end up mattering that literally every other company said no, which seems like the worst thing possible: “We suck, no one likes us.” But it took that one meeting to get us to that next step where we needed to be.