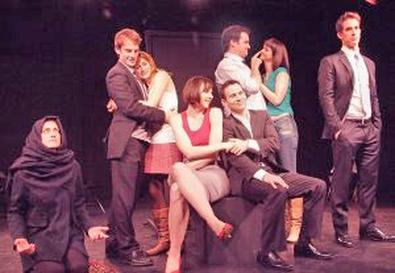 A play is generally defined as one or more players acting out a story in front of an audience of one or more. Interaction between the players is implied, and some degree of conflict leading to a resolution is required. James Lyons' world premiere, directed by Audrey Moore and Leila Vatan, is a series of monologues parceled out to eight wannabe actors performing, it would seem, for their peers in an acting-class environment. As such, it might be acceptable, though undeniably coarse and beyond vulgar, as a hypersexual statement of "Who I am: the real me, scars and all." But these solo rants, one discovers after allowing for individual lapses of rotten taste, are performance pieces, direct from Lyons' pornography collection (he wrote them all), studied and memorized by young students eager to grab a piece of the brass ring. The monologues' relationship to anything that could be called theater, a play, or even an acceptable performance piece is nonexistent. Fortunately—which would be unfortunately if the material were better—most of the students had not yet reached the session in the class curriculum that teaches one of the primary things an actor must learn: how to speak (it used to be called project) so that an audience can hear as well as see a performance. Maybe it's a blessing in disguise that much of the dialogue is addressed to the "inner actor" of several of the performers, as observed so often in even our smaller theaters. Alexandra Ella, Alex Weed, Michelle Lawrence, Mike Horton, and Jeremy Radin, along with Lyons and directors Audrey Moore and Leila Vatan, perform.