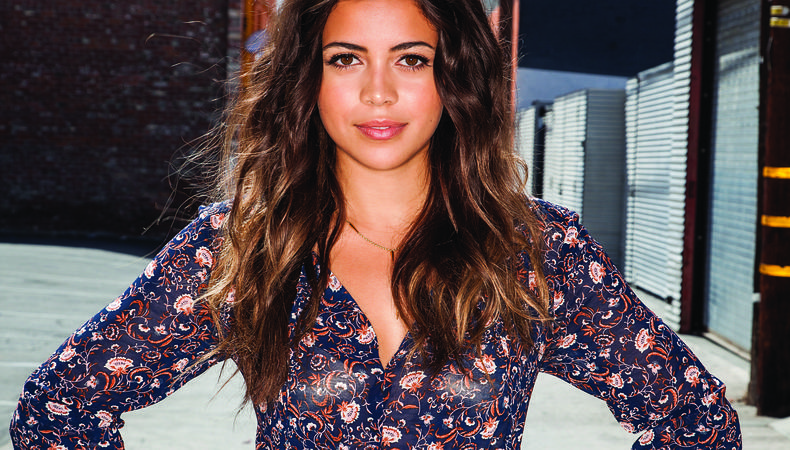 On the challenges of ‘American Crime.’
“The material, and the subject matter in general, is very difficult to swallow. It definitely pushes boundaries and makes you think in a different way. It was challenging, but it was also very eye-opening and just an awesome experience to learn these different points of view.”

On pushing for diversity in casting.
“I had always wanted to do film and television—that’s always been my dream. But growing up and watching TV and film, I didn’t see anyone who looked like me. There weren’t a lot of Latinos in mainstream TV shows and movies, so I didn’t really think it was a possibility. As I was in college, I started to notice a shift, [and] I thought that I could join this movement right as it’s happening. I graduated a semester early, and within a month of graduating I moved [to Los Angeles].”

On dream collaborations.
“I wanna do something with Gina Rodriguez. I think that we would kill it together—I think that we would mesh really well. She’s from Chicago, like I am, and she’s Puerto Rican, so I feel like we have all these similarities. She’s a big voice in this whole diversity conversation, too. I would just love to work with her.”

On learning from Emmy nominee Lili Taylor.
“Because of the nature of the story, I mainly work with Lili Taylor and Connor Jessup and Elvis Nolasco. Working with [Lili] is just incredible. She’s such a giving actor. She’s given me so much advice—just how to handle yourself on set. She’s very there and present and this is her job, and she takes it very seriously. She’s not messing around. She’s focused from the second she gets to set. So watching her do that and kind of segregate herself to do the hard work that she does, I kind of grabbed onto that.”

On testing for the first time as Evy.
“I auditioned in July. I got a call from my manager, like, two hours later that I was testing for the role the next morning. So I had another night to prepare. I’d never tested, obviously, so I had no idea what to expect. But it actually went very smoothly—it was just a lot of chemistry readings. They let some people go and it was just me and this other girl, and we had a scene that we had to learn on the spot. Kind of high stress after a long day, but I buckled down. I got really in the moment and ended up crying at the end. I felt like I left everything I could that day, and I left that night feeling on top of the world. I felt like I had it.”

Benjamin Lindsay
Benjamin Lindsay is managing editor at Backstage, where if you’re reading it in our magazine, he’s written or edited it first. He’s also producer and host of a number of our digital interview series, including our inaugural on-camera segment, Backstage Live.
END_OF_DOCUMENT_TOKEN_TO_BE_REPLACED