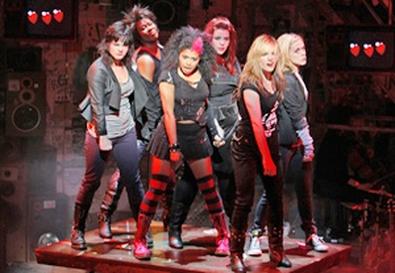 Photo Source: Paul Kolnik
It's loud, angry, and thrilling. It's "American Idiot," the stage adaptation of Green Day's smash 2004 album. Director Michael Mayer and Billie Joe Armstrong, the band's lead guitarist and vocalist, who share credit for the book, have fashioned a 90-minute rock opera for the generation that came of age after Sept. 11. The score, which also includes material from Green Day's subsequent Grammy-winning release "21st Century Breakdown," passionately expresses the frustrations of an alienated culture. As he did with "Spring Awakening," Mayer creates a moving portrait of youth in revolt. But unlike "Awakening," the adults are nowhere to be seen. These kids are all alone. Darrel Maloney's endless video projections flash across dozens of monitors and Christine Jones' industrial-wasteland set as the characters perform Steven Hoggett's frenetic choreography and blast out anthems of rage and longing.

The skeletal storyline follows three slacker pals from the fictional suburb of Jingletown, USA, as they search for meaning in a media-addled country. Johnny takes the bus to the big city, falls in love with a girl referred to only as Whatsername, and hooks up with St. Jimmy, an evilly charismatic punk rocker and pusher who is really a manifestation of Johnny's darker side. Tunny is seduced by glamorous Army recruitment advertisements and winds up in an Iraqi hospital. Will stays miserably at home when his girlfriend Heather informs him she is pregnant.

The book fails to develop these characters beyond their initial conflicts, and it wouldn't hurt to have more than a few diary entries from Johnny to guide us. Nevertheless, the dynamic score—the jagged lyrics are by Armstrong, who also composed the driving music, with Mike Dirnt and Trè Cool—leads us into the frazzled psyches of an aimless portion of America's Generation Y. Tom Kitt, credited with musical supervision, arrangements, and orchestrations, builds a bridge between the worlds of rock and Broadway by making the songs accessible to general audiences without losing the chest-slamming intensity.

As the volatile Johnny, John Gallagher Jr. is even more explosive than he was in his Tony-winning performance as the suicidal Moritz in "Spring Awakening." Rebecca Naomi Jones rips your heart out as the sweet Whatsername, but she gets supertough when the character needs to be. Tony Vincent makes for a wickedly attractive punk devil as St. Jimmy. Stark Sands is a tender and needy Tunny, while Christina Sajous soars both literally and figuratively as his dream girl. Michael Esper and Mary Faber bicker with brio as Will and Heather. Joshua Henry, Theo Stockman, and Alysha Umphress stand out from the ensemble with powerful solo turns.