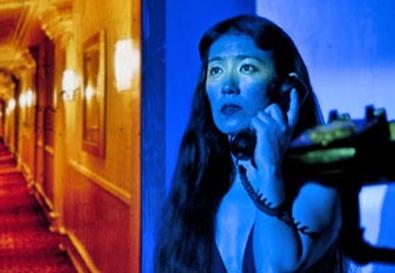 Photo Source: Jon Weiss
This is Back Stage's review of the show's original run at Performance Space 122 in fall 2009.


In the best ghost stories, you never get a good look at the ghost. You feel it creeping up behind you, but every time you turn around—nothing. This is the imaginative space opened up for the audience's terrified delectation by Temporary Distortion's latest work, "Americana Kamikaze." Inspired by Japanese spook stories, "Kamikaze" dares you to figure out its plot. There are two couples and a ghost, who divides her time between bedrooms and subway platforms, always with bad results. The couples converge, the ghost is maybe or maybe not defeated, and at least one of the couples gets a quiet night at home before the lights go out. The point is not to follow any sequential logic but to fill in the gaps with the worst excesses of your own imagination.

The production employs Temporary Distortion's by now familiar technique of stripping actors of any gesture or representation, isolating their voices into monotonous tones whispered into oversized microphones. No more than two actors at one time occupy twin platforms, while between them stylized film sequences, usually women doing disturbing things such as jumping off skyscrapers or slitting their wrists, are projected onto a vertical screen. The secret to the horror movie genre—that there are no live actors to pose the lie to a represented menace—is thus transposed into the theatre.

It's an impressive achievement and pretty frightening, as the show's refusal to clarify its story line breeds infinite suggestibility, letting each audience member construct a personalized nightmare out of a series of images and sounds. Of course, like any thrill ride, the play leaves nothing behind once the actors leave the room and the screen goes dark. It's as though, in their deep commitment to effect, Temporary Distortion forgot to add substance. As with any decent ghost story, the impact lasts only as long as the audience's goose bumps.