Amusing and Touching, 'The Man Who Laughs' Evokes Chaplin and Keaton 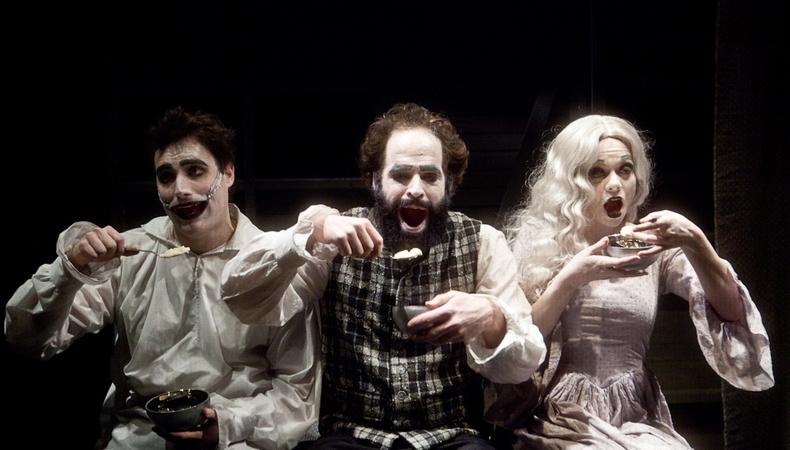 Based on a heart-wounding Victor Hugo novel, “The Man Who Laughs” is an extraordinarily clever stage show. The sad tale of an orphan who has been surgically deformed, the corners of his mouth yanked up into a perpetual smile, is rivetingly rendered in the fashion of a 1920s silent-movie melodrama. Behind a screen on which “title cards” are projected and with sets and costumes colored only in black, white, and shades of gray, extremely adept onstage actors mime and emote à la the silent era’s cinema stars. They are supported by evocative live piano music, skillfully improvised by Eugene Ma.

Written by Kiran Rikhye and expertly directed by Jon Stancato, the amusing, touching production draws less from the eponymous 1928 film and more from other silent classics such as “Pandora’s Box,” “City Lights,” and “Sherlock Jr.” As the pathetic leading character, the sideshow freak Gwynplaine, Dave Droxler displays impressive mime technique and clowning craft, channeling Chaplin and Keaton as he mines the precious territory between making us laugh and breaking our hearts. Sporting a Louise Brooks hairdo and shaping her rubber-lipped face into hilarious pouts, sneers, and expressions of boredom, Rebecca Whitehurst is superb as Josiana, the temptress who wants Gwynplaine for a play toy.

The top acting honors, however, go to Molly O’Neill, whose role presents multilayered challenges. As Dea, Gwynplaine’s blind adoptive sister, love interest, and sideshow performance partner, O’Neill must not only convey myriad deep emotions without words but also express her character’s sightlessness, which she convincingly accomplishes through enthralling wide-eyed gazes. As playing blindness typically relies on acute responses to onstage sounds, in this “silent” production O’Neill must somehow make us “hear” the noises that motivate her behaviors. In addition, in the show-within-a-show scenes Dea sometimes plays a marionette. Working in the antiquated acting style the cast emulates throughout, along with physicalizing her character’s disability, O’Neill then persuasively takes on the limp-muscled, loose-jointed qualities of a puppet.

The highlights of the evening are the scenes between Dea and Gwynplaine in which they poignantly flirt with one another or comically enact their silly shows. The chemistry the two actors manage to muster within the expressive confines of the silent screen conceit is remarkable. Jon Froehlich and Raife Baker, in supporting roles, get a lot of dramatic mileage out of exaggerated body movements, but both need to enlarge and energize their eye movements; this is what makes the other three performers so resemble silent-film actors.

Michael Minahan’s ambitious set, keenly reminiscent of silent movies, and Julie Schworm’s detailed period costumes enhance the work’s transporting visual qualities. The evening is marred only by a nasty bright light (emanating I believe from a suspended projector). It shines directly into your eyes each time you look up to read the title cards. Providing time to arrange the show’s surprisingly intricate sets and staging maneuvers, the titles contain lengthier text and are projected for longer intervals than in real silents, so that harsh glare proves significantly problematic.