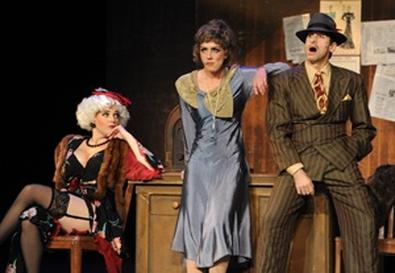 Twelve-year-old Melody Hollis, as the plucky title orphan, wins us over from the outset with her powerful delivery of the rueful ballad "Maybe." This pint-sized belter truthfully conveys an astonishing range of emotions. Her pairing with the superb Jeff Austin as bald-headed billionaire Oliver Warbucks, whose blustery manner can't mask the sweetheart inside, evokes great warmth, laughter, and an occasional tear. Andrea McArdle, who was nominated for a Tony for playing Annie in the original Broadway production, now tackles the role of hard-drinking, child-despising orphanage head Miss Hannigan. In great voice and displaying her well-honed comedic chops, McArdle plays the harridan with less of a cartoon-flavored approach than is customary, making the role her own.