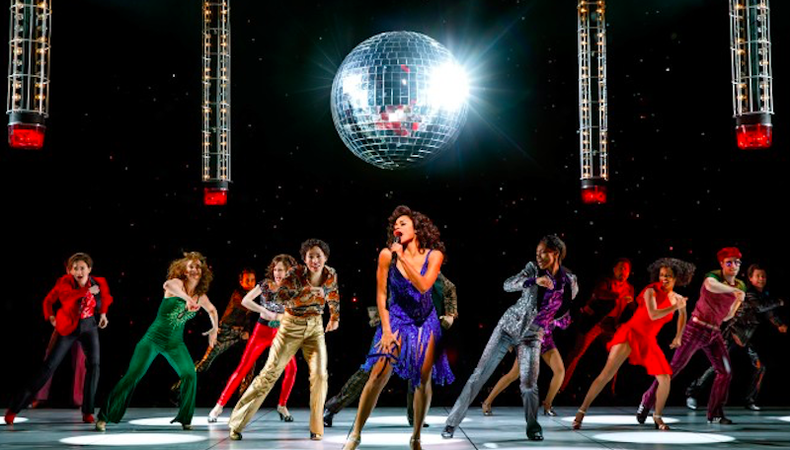 For her role as Disco Donna in “Summer: The Donna Summer Musical,” Ariana DeBose is a first-time Tony nominee—but she is not new to Broadway’s stages. Having made her debut in the high-flying musical adaptation of “Bring it On” back in 2012, she’s worked steadily and diligently for years, racking up a résumé as expansive as her skillset. In fact, “Summer” marks the third consecutive season in which DeBose has originated roles in Broadway musicals, the other two shows being “A Bronx Tale” and “Hamilton.”

The true blue triple threat recently came by Brooklyn HQ to discuss paying homage to an icon onstage eight times a week, why she left “Hamilton” despite not having another gig secured, and how she learned to reconcile the “business” side of “show business.”

Her first Tony nomination means having a seat at the table.
“I didn’t see the Tony nomination coming at all. It wasn’t on my radar. I just was happy to have a gig, and one that people seemed to like. So I’m just living large! It’s a job, it’s a great gig. I’m an actor. I was taught to hustle, to grind, to always try and find your next gig. And when you get a good one, [to] live in it, sit in it, and get as much as you can. And when you’ve soaked all of the wisdom and the goodness out of it, then go find a different challenge. But, that’s the artist’s life…. As a woman of color I’m just like, ‘Thank you, thank you.’ I’m really grateful to have a seat at the table.”

On leaving ‘Hamilton’ without having another job secured.
“It was the right thing to do at the time because I had seen ‘Hamilton’ all the way through its journey, and at that point I was like, ‘It’s time for a new challenge. I need to try for different things and step away from the ensemble for a minute.’ When you make a decision like that, you know it’s going to be harder. You have to change people’s minds; you have to work twice as hard as everybody else because it’s not how people had seen me for the last four years. I was like, ‘Alright, I’m dedicated to this decision, and I’m going to take a big, fat leap of faith here and just do the work.’ ”

Learn it sooner rather than later: Broadway is a business.
“We are an industry that is quite romanticized. I’m noticing generations that are coming up behind me that have gone to university or conservatory and, while they have beautiful technique when it comes to craft, there’s not a lot of business sense or tools being taught to these young adults coming into the industry…. The best thing I did for myself was to try to look at this as a business: This is goods and services and I’m a product. That basic perspective has helped me in a lot of different ways to manage my expectations appropriately.”

Rejection isn’t personal, even though it can feel as such.
“This line of work is not for the faint of heart. I left home at 19 and just moved [to New York City]. I didn’t have a lot of money, I was sleeping on a couch, I was finding my auditions through Backstage. I’ve always had the capacity to step out on faith and do the work and to really humble myself. You gotta be able to hear a lot of stuff, and most of it is, ‘You’re still doing this and this is not working for you. What are you going to change?’ That can be really hard when you’re in such a personal art form. Those are deep cuts! It can be really challenging to keep things separate and realize this is business, and this is the personal part of it. They’re two separate things, and that was one of the biggest lessons I learned, thankfully, fairly early on.”

Auditions are good faith pledges.
“If you go in for a job and you get the job, take the job! It’s why you went in in the first place…. That’s the good faith pledge you’re making when you go in for an audition. It’s like, ‘Why would I go in for a job that I’m not going to say yes to if I get it?’ As long as your negotiation goes well, I do feel like when you accept an audition, essentially you’re saying, ‘Yes I’m very interested in this project and I would love to work for you.’ ”

‘Summer’ is more than a jukebox musical.
“[Donna Summer takes] you on a journey, reconciling all the different parts of her life. It’s not in linear format. My character starts with ‘I Love to Love You’ where Donna breaks out, and it’s the first days of stardom for her…. You’re watching an icon try to decipher what her life stood for. A lot of people do call it a jukebox musical, but I think it’s a little more than that. I think the music she made ended up telling the story of her life.”

DeBose pays it forward through an artistic mentor program called Mentorly.“My mom is a public educator, and so teaching is sort of ingrained in me, in a way. And I discovered this company through my Kathryn McCormick, who’s an incredible dancer. But she had become a mentor for this company called Mentorly, and I reached out and I said, ‘Hey, I’d be really interested in doing this,’ and it’s not that much of my time. You know, right now, I’m scheduled within an inch of my life, but I’m looking forward to getting back to being able to take these sessions with young aspiring artists. And some of them are dancers, some of them are musical theater students, and helping them navigate the program they’re in or they’re looking for summer programs or [looking to] take this to the next level—it’s fun for me because I get to see the light bulbs go off, but I also get to sort of redirect their thinking. I was like, ‘Don’t think about good and bad. Don’t think about what [you did] wrong.’ That sort of thinking implies that one thing is better than the other, and there’s no right or wrong…. That’s what’s fun for me, is to try and help give them a foundation that will support them when they first start out in the business, because that’s one of the hardest times.”

Casey Mink
Casey Mink is the senior staff writer at Backstage. When she's not writing about television, film, or theater, she is definitely somewhere watching it.
END_OF_DOCUMENT_TOKEN_TO_BE_REPLACED