An Artistic Director on What Not to Do With Your Lines 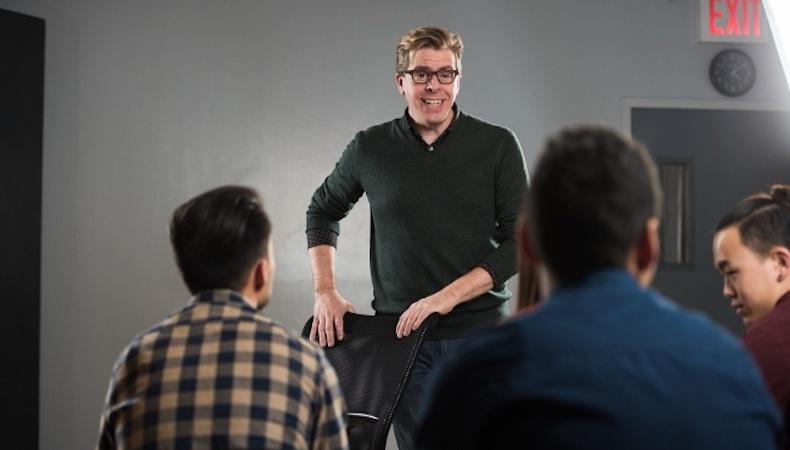 When Richard Omar took over as artistic director of the New York Conservatory for Dramatic Arts this year, he wanted to continue the work he’d begun as a teacher there: helping students walk into a audition armed with confidence and authenticity, having done the research. Here, he discusses his vision for the two-year program, which puts students in front of the camera in a professional environment.

What do you hope your students glean from their time at the conservatory?
There’s such a movement right now about being yourself, trusting yourself, and not worrying about what the casting directors are looking for, and it bothers me. You don’t know when you walk in to see a casting director what exactly they want or what that piece of chemistry is, but you can Google people, you can watch their work online, you can watch the series you’re auditioning for or the other work the director has done. You can arm yourself with quite a lot, and it’s a big [element] we infantilize actors about in a way we wouldn’t if they were interviewing for a job at Microsoft. When I get an audition, I have to do everything I can to book that audition. Here, we’re motivated to empower actors about the things they can control.

That kind of goes against the “personal brand” notion.
Most actors play a version of themselves, but hopefully you can engage your imagination to such a place where you can ask, “What would I be like if I was working in a factory?” and you can bring your soul and your essential self to a wide range of circumstances. That’s the piece of the audition puzzle people forget. One of the primary signals people find attractive is confidence, and that comes from preparation. That isn’t something that comes from within you spontaneously; that comes from knowing how to do your job.

READ: How to Build and Maintain Your Personal Brand

Are there other skills and tools that you’re teaching students that will help them get the job?
A lot of what we talk about has to do with the practicality of trying to get a series of jobs, which means learning to interview well. One of the things we talk about in school is how not to talk about yourself as an actor.... A lot of people going to look for representation lead with their résumé. What I don’t know is who you are. Who am I going to be sending to a set? Are you going to be a prima donna? Are you going to be fun? What things are you going to bring to the table? I already have a writer and I already have a director. What I don’t have is someone to live it out. You are not a passive person reading the lines. You’re saying, “I am a person who has an intellect.”

It’s the actor’s job to bring humanity to the character that has been written.
I tell students this all the time: I don’t need you to tell me what the lines are. I have the script. I can read it. I need you to show me something that the writer couldn’t do, that the director couldn’t do.

What are some of the singular things this program offers?
When we’re teaching on camera, we’re teaching shots: “OK, now we’re going in for my close-up.” Good acting is good acting, that is true, but there are specific ways to work on different projects and different media. It’s what you can control. You can walk on set and know what continuity is. And that saves time. We’re not asking you to be an artist, we’re asking you learn how to come through the door in a way that says, “It’s raining outside.”

We also focus more on new media, on things like web series and how you can use your Instagram to become an influencer, things that are maybe not viewed as so artistically based but are becoming part of our industry. Agencies have areas of representation for influencers. I think a lot of schools ignore that. There are ways to reach other people that people didn’t have 25 years ago. You can shoot your own web series and start to put your work out there, and that’s a great thing for actors.

What do you hope students take away from the program?
I think they’re bringing a no-nonsense approach that says, “I know what you expect from me in this scenario.” I hope that our actors are going out there feeling less like a victim of the process and more of a contributor in a way that isn’t deeply personal, about whether they’re liked. It feels like a personal business, but it’s actually an impersonal business. If you don’t do well in the audition room, nobody is going to remember it three minutes later.