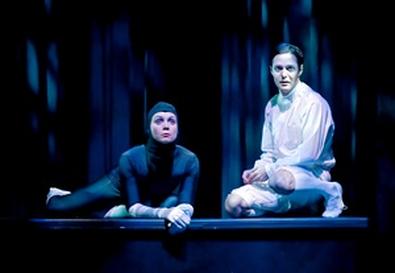 Director René Buch and production designer Robert Weber Federico cleverly collaborate in bringing the flights of surrealistic fantasy found in Federico García Lorca's "Así Que Pasen Cinco Años (Once Five Years Pass)" to the stage. Not only does the play include an interlude featuring a character known as Dead Boy and a dying cat, but there's also a sequence in which a jilted lover chats with the mannequin that's wearing his former fiancée's wedding dress. And yet, despite Buch and Federico's fine work, the elegant performances of a fiercely committed ensemble, and a first-rate English translation by Caridad Svich (used for simultaneous translation that's underwhelmingly delivered), the meaning of the play remains frustratingly elusive.

Initially, the play seems rather straightforward, as Young Man—none of the characters has a name—describes how he will wait five years to marry the girl he loves. At the same time, he dismisses Typist, who carries an unrequited love for him. Although the language and the characters' actions are poetically opaque, a seemingly linear dramatic through-line has been established.

The piece's first interlude, featuring Dead Boy, takes the audience into the realm of head-scratching symbolism, then Lorca veers back to the end of Young Man's love affair, when his fiancée leaves him for a rugby player. This zigzagging continues for the remainder of the play, as Young Man unsuccessfully attempts to mend his wounded heart.

It's Luis Carlos de la Lombana's enormously appealing and deeply felt portrayal of Young Man that pulls theatergoers through the production. Even when it is at its most confounding, the production benefits enormously from the actor's ability to communicate his character's heady ardor and keen bitterness. Equally impressive is Zulema Clares' work, not only as the haughty Bride but also as two of the play's ethereal phantasms. Similarly, Gabriel Gutiérrez demonstrates a flair for playing specters as both Dead Boy and Clown, and Raúl Durán and Marcelo Rodriguez give marvelously grounded performances as two of Young Man's confidants.

Theatergoers are likely to leave "Once Five Years Pass" wondering what it all meant, while simultaneously feeling grateful for having had the opportunity to encounter this theatrical obscurity.