Ask and You Shall Receive 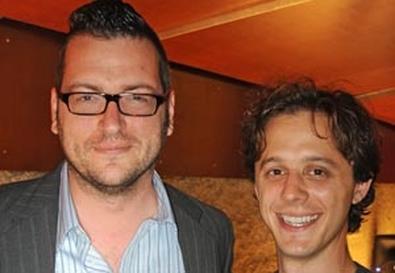 In May 2008, Theatre of NOTE in Hollywood, Calif., presented the world premiere rendition of Patterson's He Asked for It, a searing drama that offers a timely look at the urban homosexual subculture almost three decades after the outbreak of the AIDS epidemic. Egender plays a sweet-spirited young man from Wyoming who has fled the homophobic environment in which he was raised and blunders his way through the maze of gay men struggling to make meaningful connections in L.A. Among its potent themes are highly controversial attitudes and behaviors surrounding the HIV virus.

The production played to sellout crowds during an extended run and won widespread critical praise and several nominations from major L.A. awards groups, as well as a lead actor award for Egender from the Back Stage Garlands, plus a ranking from the gay-focused Frontiers Magazine among the top 10 plays of 2008. A new production opens June 12 at the Macha Theatre in West Hollywood, featuring script revisions, a new design team, and a different cast—except for Egender, who is reprising the role of Ted.

Back Stage recently met with Patterson and Egender and asked them to share thoughts on the challenges and satisfactions of this opportunity.

Erik Patterson: When one of my plays premieres, I get very involved in casting. I've been very lucky that the directors I have worked with have been open to that. I like to see what the actors do with the play, how someone is moved by a specific part. I don't like to be rigid. The play finds itself as it gets on its feet. When I'm writing a play, I start with a scene—might be the last one, might be in the middle. It's rarely the first scene. And I kind of splinter off from there and take it in different directions. In this play, Ted's parents used to be big characters and they are not in it anymore.

Joe Egender: There will be times working with you when an actor will say, "Erik, what do you think about this line being moved here or taken away?" and you always say "Try it out," and then we do. If it works, fine; if not, you say so. I think actors, including myself, try to change the dialogue a bit to almost make it easier for ourselves, closer to how we talk, though I think I've gotten better at avoiding that."

Patterson: [chuckling] Yes, and I feel I know when actors are trying to do that, and I call them on it—tell them it doesn't fit the play.

Egender: Then an actor can really zone in what the actual line is, and you go, "Oh, that's more Ted; that's the character."

Patterson: I've been writing this play for five years. It's been seen in various incarnations. The Taper did a private reading early on, and the play was much different then. Naked Angels [in New York] did the play. They read it scene by scene, week by week. I got to hear it at various different phases there. And through the development process, I've watched it grow and change. I never want to think of a play as dead. I had an experience with my play Yellow Flesh/Alabaster Rose. I realized during its first run that some very significant things didn't work. I was able to do a reading in New York at the same time and tweak some things and come back and fix them. So we did a different kind of incarnation of the same production toward the end of the run. With He Asked for It, we closed, and there were certain things that didn't work for me that I wanted to kind of fine-tune. I feel that until you publish a play, it's not done, and even after that, it's not necessarily done. I'm excited to have another opportunity to explore this material again and to make tweaks. Joe's very happy to reprise his Garland Award–winning role. This is the first 'second' production I've ever had. You want your play to live with different actors, in different homes, and see it really thrive. I'm excited we are doing this in West Hollywood. The Macha Theatre is right around the corner from Basix Cafe, where two scenes are set. It's also right around corner from La Boheme restaurant, and the romantic date scene takes place there. It's down the street from Fubar; one of the scenes is set in the bathroom there. You see the play, you walk outside, and you'll kind of still be in it in a way, which I think is lovely. You don't get that opportunity very often.

Egender: At Theatre of NOTE, we sold out every show for a six-week run and an extension, and I believe most of the audience was just theatergoers, not necessarily gay theatergoers; I think they were predominantly straight.

Patterson: I think of it as a gay play that's straight-friendly. And it's really about looking for love, a very universal thing.

Egender: Andrew Keegan, who's playing Rigby this go-around, read it. I didn't know him before, but through a contact he got my number, and he called me. I don't think we even talked abut it being gay-themed. Then 10 minutes into reading the play together, we were just talking about the characters, how great Ted and Rigby, the two lead roles, are. After a while, he said something about it being gay and that he was in The Broken Hearts Club movie 10 years ago. That took place in West Hollywood, and he played a young gay man. Yet L.A. is similar in many ways for everybody. There are 12 million people here, but it can be an incredibly isolating city—the way the geography is, the type of people who come here. That's what I think this play is about: looking for love, and the reality of what that truly means in Los Angeles. For all of us that live here, the reality is not as fluffy as some people would believe.

Patterson: I have always thought the play is about how difficult intimacy is in this age, and I have set several of the scenes in chatrooms and with characters on the phone. The moments when people actually touch are few. We go through our lives on cell phones, on the Internet. In terms of the play's gay subject matter, I think the way to be universal is to get specific. I wanted to subvert a little of the gay-theater clichés. You always see scenes in the gym, you know. There are very specific gay-theater interactions that you expect. I wanted to turn these expectations on their heads a bit and not go where you thought things would go. LA Weekly called the play an AIDS play with a difference. I think the difference is that most of the AIDS plays we have seen are about a guy dying in a hospital bed. I didn't want to write that play. I think He Asked for It is broader. It's about people living with HIV, the complexities of that, and about relationships and intimacies. It's about a lot of things that many people can relate to.

Egender: A month after we had closed the first production, I was in Ojai, [Calif.], with a friend, just walking down the street, and a woman came up to me and said, "That play you were in still haunts me."

Patterson: I write from a very deeply personal place, and I'm gay, so I explore gay issues, but I would say that in my plays, the actions are zero percent autobiographical. Yet the emotions of the play are very real and very much things I have seen and experienced. The play came out of a bad breakup—not a breakup that's represented in the play whatsoever, but the emotions kind of charged the beginning of writing the play. The play I am working on now, called Sick, is opening at Playwrights' Arena in October. It's about a mother who's a hypochondriac. Her son gets killed, and she has to basically get over herself to deal with this sickness that has kind of entered her life. I've always been a hypochondriac and finally came to this realization a few years ago. So I wrote this play.

Egender: Well, for me this is a very emotional role. Neil Weiss, the director, is phenomenal. He really knows the bounds between pushing and allowing. He told me from the beginning this play was going to cost me in a certain way, and it's true. I'm a better person for the play. When it's up and running, it's not like I have to walk around with the project I'm doing, but I am doing it three to four nights a week, and I'm in every scene for the first three-quarters of the play or so. It's pretty intense stuff. I've never had to delve this deep or be this consistent with that depth before. I think it was just a matter of taking care of myself during the run—staying healthy, not drinking. Not that I drink much, but I stopped drinking for the whole production. I'm an actor who's constantly hustling to keep my career growing. But I had to give myself the freedom to rest. It has been difficult. A week before we opened the first time, I thought, "How in the hell am I going to be able to do all of this?"

Patterson: It certainly is intense. After all, you have a seven-page monologue. I'm a playwright who likes to see his productions multiple times, and it's not like you do the same thing every time. You're consistent in a way that's good for the other actors and doing what you are supposed to be doing, but I feel the emotions are new each night. And it's not that you're making things up. You're doing the emotional beats but in a fresh way, keeping it spontaneous. That's what makes a play breathe and live.

Egender: I never before had the experience of doing a play and a year later doing it with a whole new cast. What's good about this is I can't get stuck in what I was doing before, because when I listen to an actor, their energy is very different from the last actor who did it. It's a great experience from an acting standpoint. It really keeps you on your toes. There's an excitement, a buzz with this production.

Patterson: I want everyone to see this play. I invite people from all different backgrounds. I have people in my life from very different perspectives, like my family, who have seen the play and have all been very moved.

Egender: My friends and family came out from Kansas City. This is certainly not your usual Kansas City fare, and they were blown away by it. I think it even affects them even more than other people. This is one of the best acting experiences of my career, no question.

> Has had plays mounted in L.A. at Theatre of NOTE, the Actors' Gang, and Evidence Room, among others

> Co-wrote the film Another Cinderella Story; has written film and TV scripts for Warner Bros., ABC Family, and Universal

> Acting nominations for He Asked for It from Ovations, LA Weekly, Los Angeles Drama Critics Circle

> Played a lead role in the film April Fools' Day

> Has appeared on CSI: NY, Do Not Disturb, and The West Wing

> L.A. and San Francisco stage credits include Orphans, Gaggle of Saints, and Food for Fish