August Wilson’s ‘The Piano Lesson’ Remains a Masterpiece in Revival 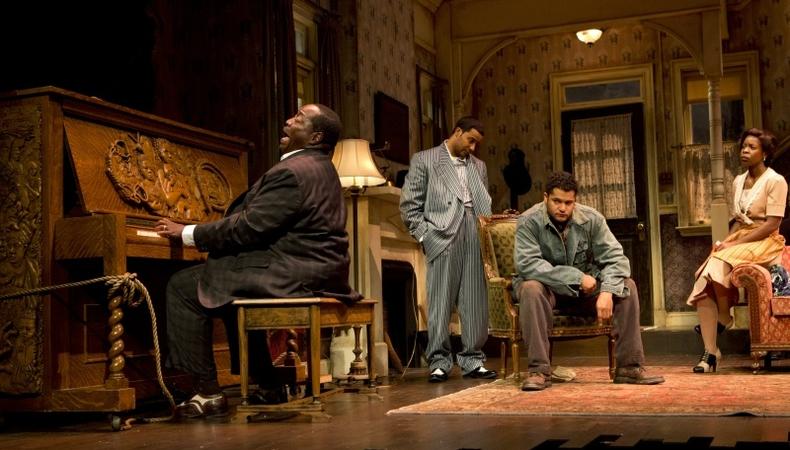 “The Piano Lesson” is a theatrical whirlwind with the power to blast away barriers between the past and the present, the living and the dead, and reveal the darkest secrets and brightest aspirations dwelling in the human heart. In the able hands of director Ruben Santiago-Hudson and his sterling cast, the Signature Theatre’s welcome revival of August Wilson’s Pulitzer Prize-winning masterpiece still succeeds as a probing play about one particular family, a crackling good ghost story, and an exorcism of the American soul.

Set in a house in the same district where all but one of the 10 plays in Wilson’s Pittsburgh cycle take place, “The Piano Lesson” centers on the conflict between a young widow named Berniece and her brother Boy Willie over Boy Willie’s desire to sell a piano that their father made. It’s not just an ordinary piano, though; the piece bears carved representations of the family’s slave ancestors, and as such is a repository of family myth and history. Boy Willie wants to sell it so that he can buy back land in Mississippi, but Berniece refuses to let the piano go even though she never plays it. Berniece and her brother have been at odds since her husband died in a botched lumber theft that was instigated by Boy Willie.

Coinciding with Boy Willie’s arrival at Berniece’s house is the appearance of the ghost of the white man to whom the piano, and the land Boy Willie wishes to purchase, once belonged. All the inhabitants of the house—Berniece, her daughter Maretha, and Berniece and Boy Willie’s uncle Coaker—see the apparition, but Boy Willie refuses to recognize its existence. The action reaches a thundering climax during a ritual of purification that shakes both the house and the family to its foundations.

It would be easy for a director to lose control of the titanic forces simmering underneath the surface of the play, but Santiago-Hudson keeps them under control until the end, when they simply cannot be constrained. In some ways, he conducts the play as much as he stages it, skillfully modulating shifts between the folksiness of Wilson’s dialogue and the elevated language of his characters’ arias.

If Brandon J. Dirden lacks some of the ferocity that Charles S. Dutton brought to the role of Boy Willie in the play’s original 1990 production, he more than makes up for it with vitality and sincerity. Roslyn Ruff blends iron rigidity and vulnerability as Berniece, and Chuck Cooper steals each scene he appears in as Doaker’s ne’er-do-well brother, Wining Boy. Jason Dirden, James A. Williams, Alexis Holt, Eric Lenox Abrams, and Mandi Masden round out a superb ensemble.

The production isn’t perfect. Some of Boy Willie’s convulsions in his final struggle are a bit over the top, and the special effects in the climactic scene are underwhelming. But these are only slight blemishes on a powerful production that does justice to Wilson’s profound writing and deserves a longer life on Broadway.