The Austerity of Hope 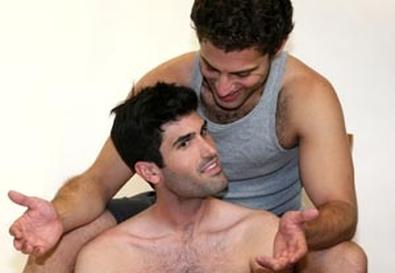 Photo Source: Rob Zukowski
Playwright Dan Fingerman's program bio informs us that "The Austerity of Hope" is his first play and "there may be more." I certainly hope so. In this comedy-drama about a group of mostly gay 20-something friends in Queens, Fingerman shows an adeptness at characterization and a fine ear for contemporary speech. His plot and structure, alas, are entirely too naive. Still, this is the kind of early work that the Fresh Fruit Festival exists to nourish, and when you factor in a group of confident performances from the unfailingly attractive young cast and the sure-handed direction of Dan Dinero, it's a pleasant-enough way to spend a couple of hours.

Relationships come together and break apart as Fingerman's characters search for love, sex, and meaning in their lives. While their actions are always believable, we're rarely surprised by what happens. The multiplicity of locations and short scenes and the inclusion of some unnecessary minor characters make the work feel more like a screenplay than a stage piece. Also, though the playwright makes much of the fact that his story takes place just before and shortly after President Obama's election (the title is a riff on "the audacity of hope"), he's not very successful at making the political background organic to the tale.

Still, these characters are engaging company and we care about them. Fingerman has pulled off a particular coup by making Simon, the group's unabashed proponent of meaningless sex, quirky and interesting far beyond the classic stereotype. He's helped by the charismatic Max Rhyser's dynamic performance, full of a charm and intelligence that make us understand why Simon's friends put up with his frequently boorish behavior. When the headstrong, opinionated Simon suddenly falls hard for the formerly straight and still-married Kurt (a nicely low-key Spenser Genesy), Rhyser's assured work is crucial to our acceptance of the unlikely turn of events. He is an actor to watch.

Nik Kourtis and Matthew Baldiga are funny and touching as a longtime couple experiencing difficulties, Jacob Perkins is sweet yet strong as a shy would-be dancer from the rural South, while Jason Hart is appropriately conflicted and emotionally constrained as a closeted former child star taken with the terp. Aimee Howard, as the pretty and witty but definitely not gay girl at the group's center, has a lovely, unforced grace and a winged way with a quip. In smaller roles, Matt Pascua is cuteness personified as a bar-hopping boy in search of love but willing to settle for sex, while Emily Kratter is memorable as Kurt's desperately chatty wife, though Kratter needs to greater differentiate her other character, a drunken girl in a bar.

Fingerman pulls his plot strands together in a hilariously disastrous Act 2 Oscar party. Any writer who can manage a scene such as that should not let his first play be his last.