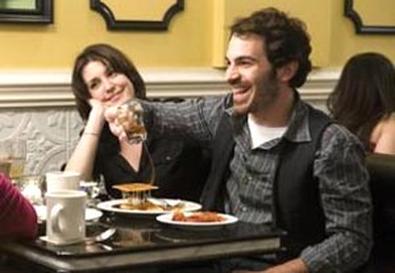 There's a scene in "Away We Go," the whimsical comedy-drama directed by Sam Mendes, in which the character Munch, played by Melanie Lynskey, begins a pole dance at a bar in front of her husband, Tom (Chris Messina). Up to this point, they have appeared the picture-perfect couple, parents to several adopted children and madly in love with each other.

As Munch continues her sad dance, Tom reveals to a friend that his generous, spirited wife has suffered a series of miscarriages that has devastated them. Lynskey has no dialogue, but the tragedy and despair are written all over her face. It is a moment that, in the wrong hands, could have gone horribly awry. As played by these actors, it is poetry.

Lynskey has been hitting all the right notes for years, turning in honest performances in a wide variety of genres. When not sweetly stalking neighbor Charlie (Charlie Sheen) on the CBS comedy "Two and a Half Men," she has played a woman who brings a baby into a bar in "Sweet Home Alabama" and an unappreciated journalist in "Shattered Glass."

But 2009 might be Lynskey's busiest year yet: In addition to "Away We Go," she has no fewer than three more movies set for release. First she appears as Matt Damon's patient wife in Steven Soderberg's "The Informant." That's followed by her turn as a drug dealer's girlfriend in "Leaves of Grass" and her role as sister to George Clooney's character in "Up in the Air."

The New Zealand native was only 15 when she landed the lead in fellow Kiwi Peter Jackson's 1994 drama "Heavenly Creatures," which told the true story of teenagers Pauline Parker (Lynskey) and Juliet Hume (Kate Winslet), best friends who murdered Parker's mother in 1954 to avoid being separated from each other. Lynskey, who had been acting in plays since age 6, landed the part after casting directors came to her school. "My English teacher told them, 'This girl writes plays and puts them on. You should audition her,' " Lynskey recalls. "I thought it would be a good experience, something to put on my résumé to drama school, that I had auditioned for a movie. Instead they flew me to meet with Peter, and I got it."

Asked how she prepared at a young age for such an intense role, she laughs and admits, "I was a pretty intense girl anyway. I wasn't a happy-go-lucky teenager." She praises Jackson for bringing in an actor for Lynskey to work with who she says "translated" the role for her, helping her understand her character's intentions. "They also showed me how to go to dark places, then come back and be myself. They were very good about making sure we weren't losing our minds."

After the film was released to acclaim (Time magazine called Lynskey's portrayal "perfect"), co-star Winslet went on to worldwide superstardom with "Titanic." Lynskey went back to school. "I thought the movie would come and it would be nice that my parents could see it," she says. "I had no idea it would be so huge. Even so, it wasn't like people were beating down my door, shouting, 'We need to get her for our movie!' It was a very specific role." Aside from a cameo in Jackson's "The Frighteners," Lynskey put acting on hold to attend college. But after the first year, she found the draw of performing too strong. "I wanted to get on with my life, but in the back of my mind I kept thinking, 'What if I could do it?' " She began auditioning again and eventually landed a role as the not-so-evil stepsister to Drew Barrymore's lead character in "Ever After," a feminist retelling of the Cinderella legend. Since then, Lynskey admits, "I've pretty much always worked."

But it wasn't always easy for her, even after starring in an acclaimed movie. "The first casting director I ever met out here told me I had no business being in Los Angeles," Lynskey recalls. "She said, 'I'll tell you right now: You have the wrong look, you are not going to work here, and you're not going to have a good time.' " The CD also told the actor she wasn't pretty enough and suggested she try moving to England. Ironically, Lynskey had recently come from working in London. To make matters worse, she wasn't driving yet and had to wait in the office for a taxi to come get her. "I kept telling myself, 'Don't cry in the office; just wait until you get in the cab.' "

Not helping matters is that Lynskey is the "worst auditioner in the world," she says. "I still get so nervous, every time." She prefers to audition on tape, usually under the direction of her husband, actor Jimmi Simpson. Though he's perhaps best known as creepy Lyle the Intern on "The Late Show With David Letterman," Simpson has appeared on Broadway in "The Farnsworth Invention" and in such films as "Zodiac." Says Lynskey, "With tape, I feel I have some control over it. And Jimmi's a really good director."

Obviously, some auditions have gone well. Her role as the girl next door who happens to be stalking Charlie on "Two and a Half Men" was originally intended to be a guest-star part in the pilot, with an opportunity to recur. On paper, it seemed a traditional psycho role, but Lynskey had another take: "I just had this weird idea, like what if she's not obsessive and lustful? What if she's just sweet and just doesn't get it? I think it was less threatening than doing it as a crazy stalker."

Though Lynskey has worked steadily for years and her appearance onscreen always guarantees at least one performance worth watching, it wasn't until recently that she began consistently booking significant film roles. What changed? "Well, honestly, I got a new agent," she says. "That sounds awful. But it's true. A couple of years ago, I started working with someone new, and she is amazing." The "she" in question is Rhonda Price at the Gersh Agency, who was an admirer of Lynskey's work.

Still, leaving her previous agent was difficult for the loyal actor. "I was feeling frustrated," she says. "My TV agent was a lovely person and a wonderful agent, but I just never found a place on the film side of things. Everything I was going out for was the best friend—not that there's anything wrong with that. But I kept seeing movies and thinking, 'I wish I could have auditioned for that.' "

Lynskey was also battling her self-doubts. "We have so many insecurities as an actor you start thinking, 'Well, what if this is as good as it gets? What if it's not my agent and nobody wants me?'" Lynskey says she was "finally brave" and made the move-and her life changed.

As for what she'd like to do in the future, Lynskey says she is looking for quality projects: "I was talking to Matt Damon when we were filming, and he said actors choose roles for all different reasons—like you want to play a certain part, or maybe this will be a big movie and help my career. He said, 'None of that ever works. You should just base it on the material, because at the end of your career, they're not going to remember how much that movie made.' He's right. It's hard not to get bogged down in that, because I'd like to play something like a drug addict. But if it's in a crappy movie, it doesn't matter."