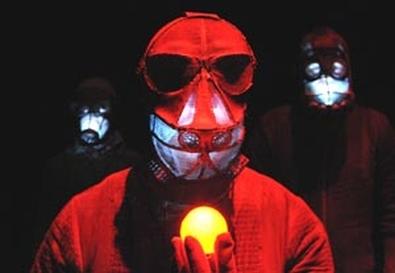 Many scientists believe that our universe was born from a high-density singularity that expanded to create everything we are. They also theorize that we can create these "baby universes" ourselves, if the conditions are right. In "Baby Universe: A Puppet Odyssey," the team behind Wakka Wakka Productions—Gabrielle Brechner, Kirjan Waage, and Gwendolyn Warnock—breathes unexpected life into a scientific theory, producing a visually stunning and emotionally soaring creation.

"Baby Universe" opens on an apocalyptic Earth, devastated by the increasingly powerful sun, a planet where rain is only a memory. To escape the heat, most of the remaining humans live in underground bunkers, wasting away and surviving only on each other. The Earth's last resources are given to a chosen few scientists and caregivers, isolated in a lab while attempting to create baby universes that might offer a new frontier—and new hope for salvation.

The disturbing premise is recalled throughout the play in radio broadcasts from the underground settlements. On a dark stage, the survivors repeatedly warn in dry, cracked voices that "these days are the last days." With their faces lit only by the bleak light inside their protective helmets, these doomed figures are the only characters played by humans. The rest of the players in this universe—the ones attempting to save it—are puppets.

As the press material warns, this isn't a children's play. As in its famous predecessor "Avenue Q," puppetry allows the creators to explore more-disturbing or adult themes than human actors might be able to pull off alone. But unlike "Avenue Q," the puppets in "Baby Universe" are as visually stunning as they are expressive. They're designed by Waage and range from 9 inches to 9 feet tall. The majority are hand-and-rod puppets, the type made famous by Jim Henson, whose influence is evident in the hilarious sparring between the head researcher and his assistant. But the elaborate design of the puppets and the emotional range they display move far beyond the comic. When the villainous sun (a colossal 9-footer) entered for the first time, its flashing eyes and thunderous footsteps made me quake in my seat. And when a mother raising a new baby universe sees it grow, as would a real child, her maternal joy is absolutely heart-wrenching.

Though the five puppeteers are always visible when their puppets are on stage, Warnock cleverly outfits them in gas masks and black jumpsuits, not only concealing them but also offering a reminder of the similarly dressed humans languishing below ground. Although this apocalyptic background has clear environmental implications, "Baby Universe" isn't moralizing; the messaging takes a back seat to the storytelling. Waage and Warnock, who both wrote and directed, bring together an array of visual elements—from futuristic video by Naho Taruishi to dramatic lighting by Kate Leahy to the staging of more than a dozen puppets and their puppeteers—with finesse. What they create is a rare visual spectacle that is much more than the sum of its parts. Far more than a puppet show, "Baby Universe" is a theatrical event that should not be missed.