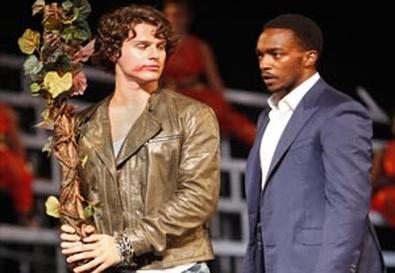 The press release for Joanne Akalaitis' production of Euripides' tragedy says it's about "what happens when a government attempts to outlaw desire." Well, to paraphrase Alan Jay Lerner, Akalaitis and heaven forgive me—I am not certain she is right.

The play, particularly in Nicholas Rudall's clear, spare translation, is a cautionary tale about the foolishness of man defying the gods. Dionysus, son of Zeus and the human Semele, is a god himself, and he's angry that the people of Thebes don't recognize him as such. So he turns the women—including Semele's sisters and their mother, Agave—into frenzied bacchants who roam the countryside drinking lots of wine, ripping animals apart, and having wild sex with strangers. The young leader of Thebes, Pentheus, son of Agave and grandson of the great ruler Cadmus, is appalled at reports of the behavior of his mother and sisters and intends to put a stop to it. But he's no match for Dionysus, who appears in human form and taunts Pentheus on to disaster.

Pentheus' choices are entirely reasonable, those of a loving son and a responsible leader. The point Euripides is making is not about a feckless government oppressing its citizens. It's that what man wants doesn't matter in the face of the gods, who demand submission and worship. This undoubtedly resonated with the Greeks, but we don't believe in their gods today, nor does the Western belief in a just and loving God allow for such capricious and tormenting behavior on his part. The central question of the play is moot. And that makes it awfully hard to stage successfully.

There still are a number of things to admire about the production, starting with Anthony Mackie's excellent Pentheus. Quickly becoming one of our finest young stage actors, Mackie is commanding as the agitated ruler and eerily unsettling in his drag scene with Dionysus. Jonathan Groff is surprisingly effective as the Stranger, Dionysus' human guise. Groff's boyish good looks, mop of curly hair, and impish delivery make him feel like Jesus in "Godspell," only dangerous. In the moments when he must be the immortal god and register his full wrath, however, Groff is less successful despite an earnest effort. André De Shields hasn't much to do as the blind seer Teiresias, but he does it well. George Bartenieff is an appropriately aghast Cadmus; Rocco Sisto stands out as a messenger with exceptionally bad news; and Joan MacIntosh as Agave plays her difficult recognition scene with admirable size.

A hallmark of this production is Akalaitis' use of the chorus, here made up of female "barbarians"—meaning non-Greeks—from various Asian countries where Dionysus is worshipped. Akalaitis had Philip Glass compose music for the choral sequences and presents them as fully staged and sung musical numbers. It's a good idea and works best when the score's soaring open harmonies reflect the women's religious reverence. Unfortunately, Glass is less successful in dramatizing their savagery, despite his use of animalistic drums and jagged accompaniments. Still, he must get great credit for setting the text so well that every word is easily understood.

John Conlin's curved set of bleachers rising from a single point on the stage is attractively reminiscent of the shape of a Greek amphitheatre and provides useful playing levels. Kay Voyce's contemporary costumes reflect character and position, though her orange chorus outfits seem left over from Christo's Central Park installation.

"The Bacchae" is worth the trip for serious theatergoers, but Akalaitis hasn't solved the problem of making it relevant.