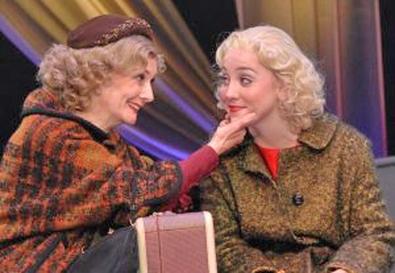 Photo Source: Shashin Desai
This enchanting new bio-musical about film star Ginger Rogers (1911–95), conceived by Lynnette Barkley and Christopher McGovern, is like a time-capsule trip to movie musicals of the 1930s and ’40s. The ICT production follows a recent lavish staging of this show by FCLO Music Theatre in Fullerton, and this far more intimate rendition—using a unit set and a cast of six—proves there’s more than one way to bring good material to life.

Emphasizing exuberant song-and-dance sequences, the show is more concerned with vibrant entertainment than incisive biography, covering a relatively brief period in Rogers’ life and career. Yet the warmth of the characterizations lends depth to the proceedings, particularly that of radiant Anna Aimee White in the title role and galvanic Heather Lee as her loving but overbearing stage mother. McGovern’s book generates an intoxicating showbiz atmosphere, and his scenes are smoothly integrated into the musical segments. The score includes unforgettable classics by the likes of the Gershwins ('I Got Rhythm,' 'Fascinating Rhythm') and Irving Berlin ('Let’s Face the Music and Dance'), as well as a handful of original McGovern songs, highlighted by Ginger’s stunning 11 o’clock ballad, 'What…Then?'