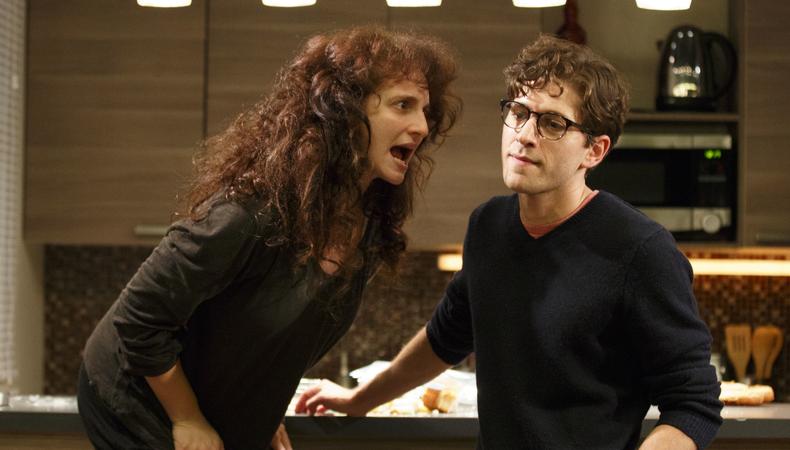 There is a ferocious whirlwind roaring through Roundabout Theatre Company’s Black Box Theatre, and its name is Daphna Feygenbaum, a senior at Vassar College who’s dead serious about all things Jewish. Embodied by a symphonic Tracee Chimo in “Bad Jews,” Joshua Harmon’s strikingly perceptive comedy with claws, Daphna is one of the most memorable characters to come down the pike in some time. Harmon’s biting script, which unfolds in 100 minutes of real time under Daniel Aukin’s unerring direction, marks him as a new theatrical voice to be reckoned with.

Daphna is crashing at the Riverside Drive apartment of her cousin Jonah, having come to town for the funeral of their beloved grandfather, known as Poppy. About to arrive, also to sleep there, are Jonah’s older brother, Liam, and his girlfriend Melody. They missed the services because they were on an Aspen, Colo., vacation and Liam dropped his iPhone while on the ski lift, ostensibly causing him to get the news of Poppy’s death too late to make it back in time. Daphna has plenty of attitude about Liam’s absence and his lack of interest in his Jewishness, embodied she believes by his shiksa squeeze. Highly intelligent and articulate but lacking a sense of humor, Liam loathes Daphna. An epic battle ensues over who deserves custody of Poppy’s chai, a small gold image of two Hebrew letters that he always wore on a chain around his neck. It has religious significance but is also much more than that.

Chimo is a wonder as Daphna, whether flinging her wild tangle of curly hair about with abandon as Daphna goes ruthlessly on the attack or becoming quiet and still while sizing up an opponent prior to battle. Chimo exposes Daphna’s every raw nerve and insecurity with unsparing insight yet also conveys the young woman’s tenderness and even sweetness, creating one great and satisfyingly human bundle of contradictions.

Michael Zegen’s Liam is all pursed lips and icy attitude, melting convincingly in his love for Melody and downright scary in his rage at Daphna. Both Zegen and Chimo handle Harmon’s ranting run-on monologues, as nasty as they are funny, with superb timing. The dim but kind Melody skirts stereotype, but Molly Ranson gives her an intriguing strength and an innate decency that complicate the character. Ranson’s Melody is also quite funny clinging to her smartphone for dear life as she tries to ignore all that’s raging around her. As Jonah, Philip Ettinger gets to spend lots of his time chewing his fingernails and bottling up his emotions as Jonah tries desperately to stay out of the crossfire. The character’s passivity could cause him to fade into the background, but Ettinger impressively keeps him active and involved in a touching performance.

“Bad Jews” is not without flaws. It starts to run in place just before Melody switches things up by asserting herself, and the ending is too predictable. Ultimately, though, it’s a stunningly knowing work that sent me out of the theater on a cloud of pure exhilaration.