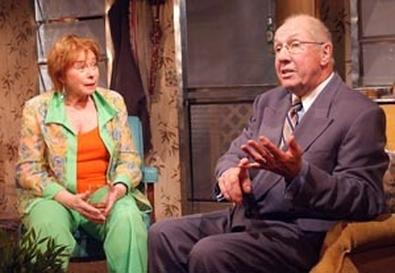 Even though the year is but halfway through, Los Angeles seems unlikely to see a more deftly crafted item than writer-director Stephen Sachs' absorbing, hilarious two-hander about the nature of art and the vagaries of human perception. And only the suicidal would hold their breath waiting to see better joint performances than those given by Jenny O'Hara and Nick Ullett, magnificent as the central combatants.

Based on real-life events, the narrative follows Bakersfield trailer park resident Maude Gutman (O'Hara), first seen lighting a cigarette in designer Jeff McLaughlin's remarkably representative, kitsch-ridden set. A foul-mouthed, hard-drinking ex-bartender, Maude awaits buttoned-down, tightly wound Lionel Percy (Ullett), an art expert from New York. After Lionel survives the marauding dogs of Maude's neighbor, his purpose soon emerges: to determine whether a painting Maude bought for $3 from a thrift store is an undiscovered Jackson Pollock worth millions. In the ensuing pas de deux, this starkly contrasted pair uncovers more than a few layers about each other, while the central question of authenticity accrues metaphoric human levels.

Sachs' economy of means, breadth of humor, and subtlety of tone deployed here are hugely gratifying. One could quibble about a few plot revelations that flirt with teleplay, but they make perfect sense in context, and Sachs' well-oiled direction keeps the tension mounting and the laughs coming. Besides McLaughlin's exemplary setting—easily one of the year's best—Peter Bayne's country-western sound plot, Ken Booth's realistic lighting, Shon LeBlanc's character-ful costumes, and Misty Carlisle's all-important props are of high standards yet quietly invaluable.

As for real-life spouses O'Hara and Ullett, their mutual affinity brilliantly serves them as they negotiate the hairpin turns and clashing motives of their characters. Merely Ullett's barely disguised look of horror at the white-trash milieu he has entered is worth a semester of Stanislavsky study, just as his gradually uproarious monologue about Lionel's first realization of what art means is worth the show. O'Hara's ability to blend the earthy with the sensitive is as rare as it is vivid, and her physicality is fully unfettered. When the climactic battle arrives, O'Hara and Ullett throw themselves into its slapstick and gravitas without hesitation, to riotous yet unsettling effect. The denouement is logical and enigmatic, with a touching final stroke of magic realism that recalls the classic one-acts of Coward, O'Neill, and Rattigan, and sums up a compact populist achievement that is, simply, a triumph.