Why ‘Beetlejuice’ Sounds Unlike Any Musical Before It 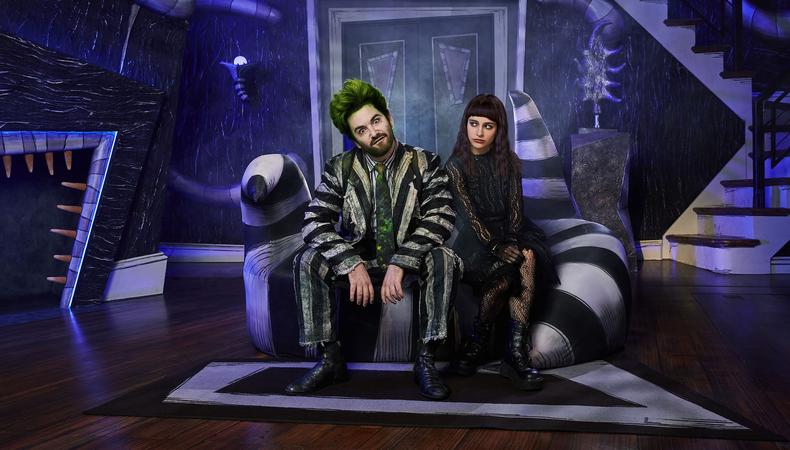 For Broadway’s “Beetlejuice” (opening April 25 at the Winter Garden Theatre), it was up to sonic mastermind Peter Hylenski to design the fantastical world from a sound perspective. That also means, according to the five-time Tony nominee, that world was informed heavily by its actors. As the musical heads into previews, Hylenski chats about how his design process is informed by acting choices, and why no thunder sound effect is like another.

How would you describe the role of a sound designer?
Theatrically speaking, we’re in charge of everything you hear. We’re in charge of sound effects that are being made, reinforcing the vocals, the band for the production. So if we’re doing a rock ‘n’ roll–style musical, we’re trying to create a rock ‘n’ roll–style atmosphere; and if we’re doing a traditional musical, it’s about transparency. The sound designer is making decisions that are appropriate for the material and creating the entire sonic picture. We work closely with the music department, we work closely with the director and the writer so that we come up with appropriate sound effects. Some shows are a couple of dog barks and a phone ringing, and other shows are fantastical, imaginative, and completely otherworldly sounds that need to be created.

READ: Good Singing Is Measured By Feeling, Not Sound

What’s unique about the sound design for “Beetlejuice”?
What’s fantastic about “Beetlejuice” is that it has so many opportunities to use sound for comedic punctuation and important storytelling moments and adding a life to things that are happening onstage, whether it’s a puppet or a character. There are lots of different types of musicals, and some have next to no sound effects, and that’s great because then your challenge might be how you’re re-enforcing the band and what the vocal balance is, which is always top of the list for us in a musical. But having that extra layer of challenge and excitement of building interesting and unique sound effects is a lot of fun.

Do sound designers work with actors at all?
Yes, in a number of ways. This show in particular has been different in its development than other shows I’ve worked on in that we did a number of labs and workshops to develop the material, and throughout that entire process, my associate and I were in the room with the actors, developing sound effects as we created the piece. More than other shows, where it might be me in my studio with a script making sound effects in a controlled environment, for this I was actually building a lot of the sound effects on site with the actors right there. We had this collaborative effort, and we would see how the sound might influence what the actor was doing or how they were playing a scene. They might laugh and find something funny, and I’d riff off of that by creating a different type of sound effect that helps to make that moment even more comedic or vice versa. We were learning from them, watching and listening how they’re playing the scene, and trying to have the sound reflect that.

In general, would you say you’re designing with the actor in mind?
Absolutely, because that’s the heart and soul of what the storytelling is. The way the actors are interpreting the text and music is setting the tone and it’s informing decisions that you make on all aspects of the sound design, whether it’s how you’re reinforcing the musicality or the type of sound effects you make. When the script calls for a thunder sound effect, it doesn’t mean that any thunder will do. You’re trying to read into the scene and see what the performers are doing and how they are interpreting the text, and that’s going to inform what style of thunder will be chosen in that specific moment. The actor’s interpretation is really informing what you are creating sound-wise. In “Beetlejuice,” because you understand that it’s a comedy, there are certain sound effects that are going to be pushed more to that comedic styling, and by understanding how the actors are interpreting the text, it allows you to see how far you are going to go with those sounds; how zany or how funny or how serious it might want to be.

Is it usually the case that sound designers stick strictly to either musicals or plays?
There is a bit of a line between the folks working on musicals and the folks that are working on plays, but I wouldn’t say it’s an absolute. Often on plays you might also be asked to compose music, and that’s a different skill set as well. For musicals, we’re also designing the sound system and putting in the loudspeakers and the communication package and the closed circuit video package as well. On a play, a sound designer might employ an associate who’s going to put in the sound system, so to speak, so they can focus on composing the music. There are certain people who do it all, but a lot of times it’s a different skill set required for each, and it just tends to be that folks doing musical-based sound design tend not to do as many plays for one reason or another.

As the sound designer, with whom do you work most closely?
On a musical, you wind up working with everyone, really, because the composer is coming up with the musical palette, and the director is the one who has the overall vision for the piece. Functionally, we’re all trying to tell a story. The composer’s idea of telling the story is through song, and their idea of musical storytelling is going to inform us in numbers of ways. The director is going to be really in touch with storytelling through sound effects but also the overall sonic picture. We also wind up working with the orchestrator because they’re taking the composer’s work and creating what each of the players in the pit are going to be actually playing note by note.

Do you have any advice for someone who wants to pursue theatrical sound design?
Theater at the Broadway level is certainly not for the faint of heart in any department. It’s long hours and a lot of work, but if you’re passionate about sound design for theater, just immerse yourself in it and listen. Listen as much as you can, whether it’s film and albums or theatrical presentations, plays, musicals—just really get a feel for what is going on sonically in the world and apply that to your work. If you understand what life sounds like around you every day and bring that into your work, that opens up all sorts of sonic possibilities. It takes a lot of perseverance and a lot of climbing the ladder to get to the top of your craft—but it’s a lot of fun once you get there.

Casey Mink
Casey Mink is the senior staff writer at Backstage. When she's not writing about television, film, or theater, she is definitely somewhere watching it.
END_OF_DOCUMENT_TOKEN_TO_BE_REPLACED