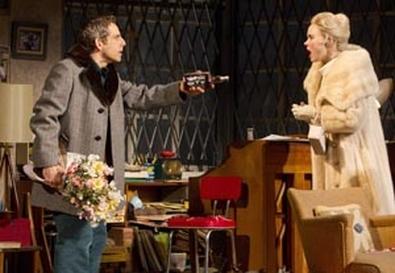 Photo Source: Joan Marcus
NEW YORK – When most successful actors thank their moms for helping their careers, few are as literal as Ben Stiller.

Back as a 20-year-old wannabe actor just starting out in New York in the mid-1980s, Stiller was auditioning with various degrees of failure when he heard about a new production of the play "The House of Blue Leaves."

Try as he might, Stiller couldn't arrange an audition. "The casting director had seen me in something and didn't think I was right," he recalls. "So I asked my mom — the only time I asked my mom to help me."

Stiller's mother, Ann Meara, was the right person to call. She had been in the first ever production of "The House of Blue Leaves" off-Broadway in 1971. She knew the playwright, John Guare, and called him up.

"That's the last thing you want to do in the world as an actor. You know the deck is stacked against you and that it's a favor," Stiller says. "But I really, really wanted the opportunity on it."

The phone call worked: Stiller auditioned for the first time while the other actors were in final callbacks and yet managed to win the small but rich part of Ronnie Shaughnessy, a troubled young man to say the least.

He stayed with the show when it made the jump to Broadway and used it as a launching pad for a career in film and TV that has veered from the adult "Greenberg" to the kiddie "Night at the Museum."

How grateful is he to his mom?

"I owe my parents everything," Stiller says, smiling.

Flash-forward a quarter century: Stiller is back on Broadway in the very same play. This time, he's playing the father of his old character, alongside Jennifer Jason Leigh and Edie Falco.

And he didn't need his mother's help this time.

"I feel very lucky to have had this play in my life," he says at a bar near Times Square. "How often do you have something like that? It's such a rare thing to have a touchstone like that."

Stiller, whose father is the actor Jerry Stiller, had no intention of ever revisiting "The House of Blue Leaves," a black comedy about a group of desperate strivers in Queens enthralled by the idea of being famous.

"It was something I had never thought about," he says. "It was such a great experience the first time around on a lot of different levels — it was my first job, it was great cast, a great production, and it was very successful and ran a long time."

But he had been toying with the idea of another play since he appeared opposite Amanda Peet and Jeffrey Wright in 2005's "This Is How It Goes" at the Public Theater. This winter, getting back on stage became even more likely when he moved his family to New York after 20 years in Los Angeles.

Producer Scott Rudin approached the actor with the possibility of remounting Guare's play. It had a nice ring to it: Besides his family's history with the piece, Stiller was, at 45, the perfect age to tackle Artie Shaughnessy, a zookeeper who has dreams of becoming a Hollywood songwriter.

"I had never looked at the play from Artie's point of view. All of a sudden, Artie starts to make a lot more sense at 45," says Stiller, laughing. "It really was about having to wipe the slate clean and go, `OK, this is going to be different.'"

The role puts Stiller in a love-triangle of sorts, torn between staying with his mentally ill wife, played by Falco, or fleeing to Los Angeles with his mistress, played by Leigh. The role also required Stiller to learn to play piano and sing.

Director David Cromer has been deeply impressed by Stiller's attitude. "He's just a workhorse," says Cromer. "When we were on a break, he was playing the piano. When I came in the room in the morning, he was sitting with the script. When I left at night, he was running lines with somebody."

Stiller acknowledges that he was intimidated at first to tackle the part, having fond memories of John Mahoney playing the part opposite Swoosie Kurtz and Stockard Channing. But he thinks he and Falco and Leigh have created a new legacy.

"Now that we're at this place, it's become its own thing. Whatever it is, I know that it's ours," he says. "It's different and it's what it is and it makes sense to me and that's all I really need to know."

Stiller says that though he's now a star, he still identifies with his character's longing for fame and recognition. On three different occasions, Artie Shaughnessy cries out that he's "too old to be a young talent."

"As an actor, I can relate to all of it. I think any actor can, no matter what level of success you have. It's show business, you know? There's always been a premium on youth in show business going way back," he says.

"There are so many themes in the play that are so relevant now — even probably more relevant now than they were 25 years ago or even 39 years ago when my mom did the play."

Being on stage again, however, is still a nervy proposition. Stiller, who was never a standup comedian, has done a few things live, but says getting up in front of people still takes getting used to.

"It's always different. You have that one shot where you want to get it right. But the reality is you never get it quite right," he says. "And that's actually the great thing about doing a play — you're always finding different ways."