Bill Hader Talks 'SNL,' Emmys, and the Origin of Stefon 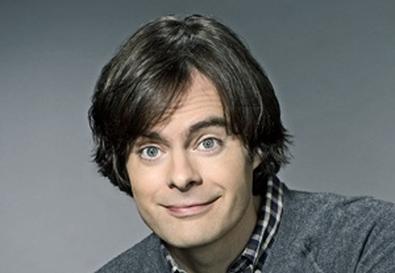 Bill Hader was shocked to hear he earned him an Emmy nomination for Outstanding Supporting Actor in a Comedy Series for "Saturday Night Live."

"I did not expect it," Hader says. "I don't think I've even thought about it."
He was even more taken aback to learn he was the first "SNL" cast member to be nominated in that category since Eddie Murphy in 1983, though male players Will Ferrell, Mike Myers, Dana Carvey, Jon Lovitz, and the late Phil Hartman were all nominated in the Individual Variety Performance category. "I can't even compare myself to those people," Hader says. "It's a big honor."

Hader has made a name for himself on "SNL," not only for his spot-on impersonations of Al Pacino, Shepard Smith, James Carville, Vincent Price, and Rick Perry, but also for his wacky and original characters. There's Herb Welsh, the cranky, senile, on-the-scene news reporter; Vinny Vedecci, the chain-smoking Italian talk-show host; and, of course, Stefon, Weekend Update's flamboyant New York City correspondent whose recommendations are always a little off base.

Back Stage chatted with the busy dad - he and his wife, Maggie Carey, welcomed their second daughter on July 28 - to learn the secret to his "SNL" success and how personal comedy can be.

"SNL" picked up 14 total Emmy nominations this year. Why do you think there is so much acclaim this season?
Bill Hader: It's a combination of having really smart writers and a great cast. Seth Meyers is one of the best head writers ever, and the nice thing about our cast? We are a real ensemble. Everyone pulls together in a way. Everyone's there for each other.

So it's not competitive? "SNL" has a pretty competitive reputation.
Hader: I always hear stories about that from former cast members who come to host or visit. And they say, "Oh, back in my day, it was pretty competitive." This ensemble is different. You know the competitiveness is ingrained in the show. It's built that way. But there's no reason to layer a level of competitiveness on top of it. We all want to be first off the bench. But if you're not, then you cheer on your team members who are out there.

Is it hard to stand out?
Hader: You have to keep your ego in check. What makes this scene work? As opposed to, am I getting enough laughs? Is this thing funny? Can we make this thing funny? Sometimes that means you don't say something and someone else comes in and says something.

How did your character Stefon come about?
Hader: The Stefon character came from "SNL" writer John Mulaney. He had met a guy who sent him an email to a club in New York. And the email had that format. "New York's hottest club is BLANK. It has everything BLANK, BLANK, and BLANK." Almost like Mad Libs. And then I met a guy at a coffee shop in Chelsea, and that's kind of how he talked. So I would come into the office and be like, "Hey guys" and do this kind of voice. And John was the smart one who was like, "Hey, we should write that."

A big part of the Stefon success can be attested to the fact that you "break" during almost every skit. Is it true Mulaney changes up the dialogue between rehearsal and the live show?
Hader: Yes. The one that started it was that we had a club promoter named Amnesia Bernstein, which we thought was really funny. But we had to change it because we did it at dress and it didn't get anything. We were about to do the live show and I was being pulled away, and John just said "I'll think of something." And so what he put in was "Gay Liotta." And when I saw that, I started laughing. And John was like, "Oh, let's do that again."

How important is it to have a writer in your corner at "SNL"?
Hader: Oh my god, it's huge. All the cast writes – some on their own. But I love having the writers there. You two know what the joke is, and it boosts your confidence and ideas when reading it to the room on Wednesday and seeing if they like it. Then you go to the rewrite table on Thursday, and they make it even better. When I'm writing with John and I'm doing Stefon or Herb Welsh, I'm directing everything to John. I'm trying to make John laugh when I'm performing because it's our little joke. Like, "John will find this funny."

It's the same with the ensemble. That's what happens when you work with a close ensemble, and you're good friends and you're family. It's very personal. The best comedy comes out of that because you're not thinking about it. It's coming from a more genuine place.

Does that happen in movies too?
Hader: Very much so. When I'm watching "Superbad" or "Forgetting Sarah Marshall," I can tell how much fun we're having. We're all just trying to make each other laugh. It's all about the connection you're having and the audience is just in on it.