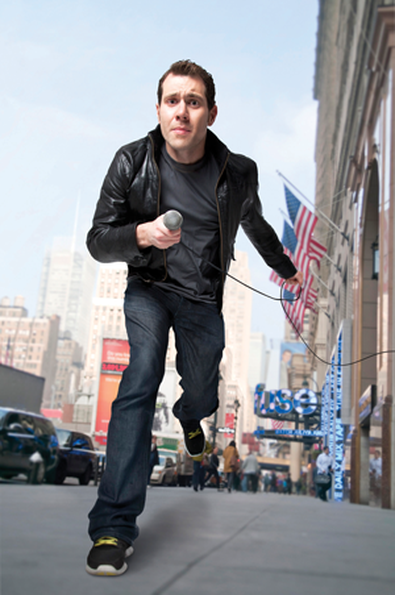 Billy Eichner is a viral video success story. “I came back to New York after college like any number of struggling performers, and you just find that niche where you can have some sort of impact. And for me that turned out to be comedy,” says Eichner, who developed his own live standup/sketch show in the format of a late-night talk show. As part of the show, he played a “man-on-the-street” video he’d filmed, and after getting a great reaction from the live audiences he put the videos on YouTube. The videos drew the attention of several big websites, including Funny or Die.

Mike Farah, the president of production for Funny or Die, contacted Eichner about collaborating. “I had been knocking around this game show idea for a while…some kind of crazy pop culture–centric funny version of ‘Cash Cab,’ which was a big hit, and [Farah] was really into the idea,” Eichner says. “Funny or Die” funded a sizzle reel for the show, which led to Fuse picking up what is now “Billy on the Street,” in which Eichner questions pedestrians on music and pop culture.

Always a fan of social media, Eichner says, “I would not have a career without Facebook and Twitter. That’s the truth. Because it was my videos getting circulated on social media that brought me to the attention of all these blogs, and that’s what led to this TV show, which completely brought my career to a different level and just made so many more people aware of me.”

Melinda Loewenstein
Prior to joining the Backstage team, Melinda worked for Baseline StudioSystem tracking TV development. When she's not working, she enjoys cuddling with her cats while obsessively watching every television show to ever air.
END_OF_DOCUMENT_TOKEN_TO_BE_REPLACED