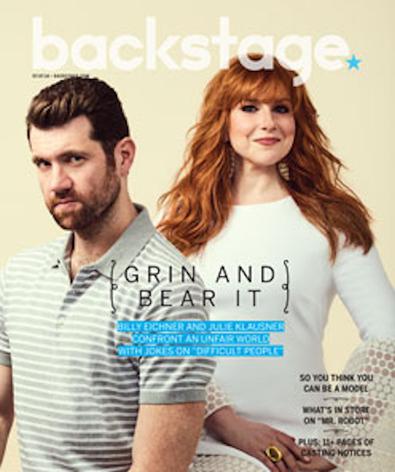 Billy Eichner and Julie Klausner are not difficult people.

Sure, they make snarky comments on Twitter and throw barbs at seemingly everyone as Billy Epstein and Julie Kessler on the Hulu comedy “Difficult People,” which returns for Season 2 on July 12. But they’re just unfazed by all the posturing that goes on in Hollywood—and unafraid to call it out.

That may eventually change as Eichner and Klausner, each of whom built their own brand of unabashed comedy over the past decade in New York nightclubs and on social media, enjoy mainstream success with “Difficult People,” created and written by Klausner and produced by Amy Poehler. Often labeled a millennial’s “Will & Grace,” the show has quickly established itself as a sharp-tongued series about two struggling actors who would likely make fun of that comparison before embracing it.

The pair—who first came together on “Billy on the Street,” Eichner’s variety game show on which Klausner served as a producer for the first four seasons—talks about striking a balance between funny and mean and what the future holds.

How much of the show is drawn from real life? The Twitter incident in the pilot episode felt very much like something that might have happened.
Julie Klausner: Yes, that happened. That definitely happened. But the joke was about Eric Clapton’s son. I tweeted something about Eric Clapton’s son and someone tweeted at me, “That’s horrible.” And I took it down, not because I saw the error of my ways as much as people didn’t like it. And then I saw that as something pretty funny, so I wanted to do that. A lot of the situations on the show come from real life. Where they go is usually different.

Are there elements of your characters’ rejections that you’ve actually experienced?
JK: Absolutely. I think what’s different about me and Billy is that we don’t hide how bitter we are. We just use it as part of our comedy. Show business is horrible, and one of the building blocks of any good friendship is commiseration and saying, “The world is so unfair, isn’t it?”

BE: For sure, it’s very much inspired by the struggling that Julie and I did, the particular types of rejection that we’ve dealt with and our own bitterness as we started to get older and watched our friends get successful, professionally and personally.

JK: But as far as how that crosses over into real life, “Difficult People,” for me, was one of those things where I practically never, ever booked an audition. If I want to do something, I have to write it for myself. That was very motivating.

Were there any absurd reasons why you didn’t get a part?
JK: “The Daily Show” was looking for a woman—a nationwide search because they couldn’t find a woman. They were casting for a female correspondent for what seemed like years. I got very close. I was convinced it was going to happen, because I wrote my own audition and felt like, “This is it.” I tried to lose weight to be on camera. I didn’t get it, and they hired Josh Gad.

BE: It wasn’t a specific audition, but it really got under my skin. One of the first big agencies that represented me, my point person there—this was over 10 years ago, so it’s no one who I work with now or have worked with recently—but he told me that I was too ambitious. He was an old-school, older, white, straight man who came to one of my live shows, during which I was doing a lot of things. I was doing standup, I was doing sketches, I had videos and I was singing, there was a band. He just told me that it was too ambitious for who I was. I also had a manager who told me—again, this was a long time ago—that some agents were coming to see the show and, for that one night, could I pull back the “gay stuff” a little bit? I actually ended up putting more in than ever before because I wanted to fuck with her. Afterward, she said to me, “You actually put more in the show this month.” And I said, “Welp—”

JK: “Don’t tell me to tone down the gay stuff.” 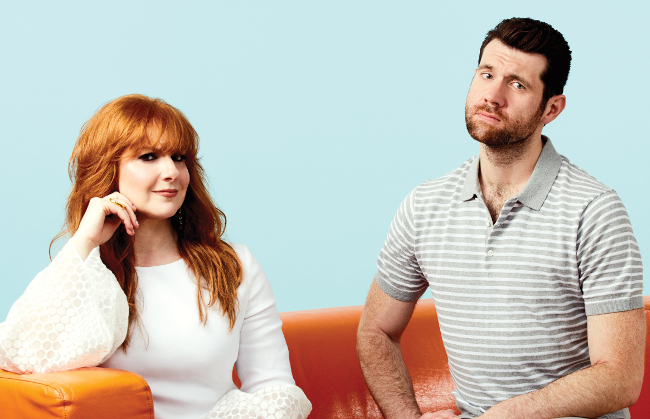 Was there a time when a person was like, “I love all of that”?
BE: Amy Poehler.

JK: There are a lot of people who loved us and were so encouraging along the way. It’s just a fortuitous collision of all the elements at the right place and at the right time.

BE: I do think that if you’re a bit of an outsider, as we were perceived to be, you need an advocate. I’d been pitching various versions of “Billy on the Street” shows for years, and yes, my videos ended up going viral and that helped, but it wasn’t an accident to walk in the room to pitch that show to Funny Or Die with the backing of Will Ferrell and Adam McKay. In terms of “Difficult People,” the same thing with Amy.

JK: She’s a really talented producer and brilliantly smart. The way she guides the show, her notes are always good. If we don’t take all of them, they’re always very strongly considered. She was encouraging in a way that saw us as who we were and encouraged [us], as opposed to being selective.

In one episode, Billy says, “We need to stop insulting people, because no one wants to work with us.” Is that something you’ve encountered in real life?
JK: Oh yeah, all the time. I think I’m a little bolder about it because no one knows who I am. I may as well piss people off while introducing myself, because at least that’s the most authentic version of who I am. There are always considerations to who we’re picking on.

BE: Also, you don’t want to really pick on someone that you genuinely like. In terms of “Billy on the Street,” there are certain actors, I don’t care if they find out because I do feel that way. Though it’s almost never about appearance or something out of their control. I pick on choices they’ve made or roles they’ve taken.

JK: I feel like sometimes when people are mean and truthful, it’s like oxygen right now. I think a lot of people try to please everybody.

JK: Or “click on this because it’s everything.” Or they just brought us the thing we never knew we needed.

BE: All that social media hyperbole is just so fake.

JK: No one has the balls to say, “That’s not a good show.” So there’s a certain amount of negativity that, as long as it’s presented in a funny way, people are like, “Thank God, someone said it.”

BE: It’s a breath of fresh air.

JK: There are repercussions. Our characters get screwed every episode. That’s not because we’re mean. Sometimes it’s because we screw up, sometimes it’s because the world around us gets in our way. I don’t think we read as bullies. I think that we read as outsiders trying to fit in while at the same time be authentic to ourselves, and are having a very hard time reconciling those two things. 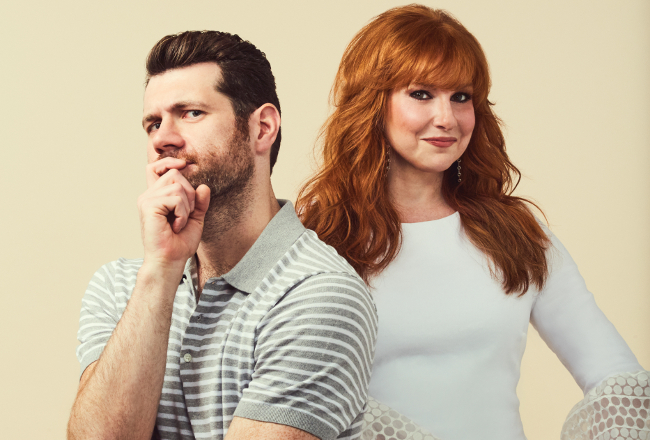 Julie, are you worried about being perceived as difficult or abrasive in real life?
JK: I imagine that sometimes it’s a little tough to tell the difference. But from doing my podcast [“How Was Your Week”] and other writing that I’ve done, I think the differences are pretty clear. Or I try to make them clear. But as a character, it’s fun to play dumb. It’s fun to say things you wouldn’t say in real life. I wouldn’t say any of this shit that I say on that show to people—I’m not a confrontational person. I tend to go home and eat my feelings.

But now you’re on a more elevated level. I was looking at recent news items and there are these stories like, “Julie Klausner Gets Into Twitter Feud With Zendaya.” Do you worry about how that is perceived in the industry?
JK: The industry didn’t seem to react as much as the Z-hive, Zendaya’s fans. When they are the industry, I will be concerned. But I think that was also a slow weekend, and I’m also wistful for a day when you make a joke about a celebrity and they make a joke back or ignore you. Or when they make a joke back, they say something mean about you in return, and you’ll have a chuckle and move on.

Is that why you’re so fascinated with Debra Messing and Susan Sarandon’s Twitter feud?
JK: That’s just the show of the summer.

BE: That’s the song of the summer. Set those tweets to music.

BE: It’s a little crazy from both of their perspectives. But it is amazing in this day and age, when everyone is walking on eggshells, these two women are at a place in their lives and in their careers and clearly in their political affiliations where they are just willing to go for each other’s throats.

JK: And take it all personally, and in front of everyone. 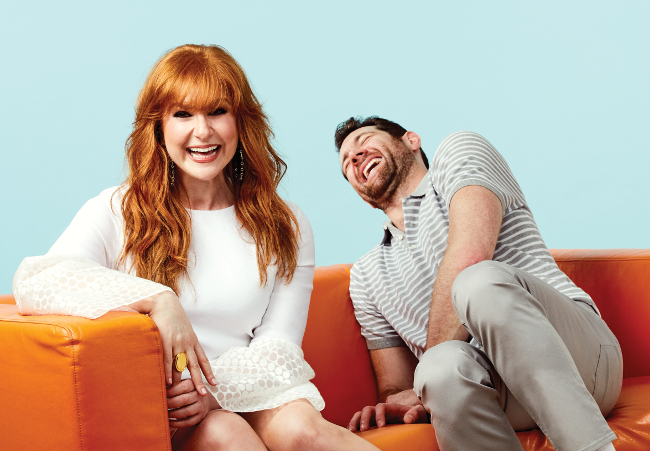 In terms of what’s next, can you even think beyond “Difficult People,” or is that your only focus right now?
JK: There are other things going on, but “Difficult People” is my baby. I think about it all the time and it’s definitely the most important part of my life. But I would love to be doing theater as an actor.

BE: Anytime you’re the creative force behind something and in front of the camera—we’re not complaining, but it is an avalanche of work.

JK: I don’t know how Lena Dunham does it.

BE: I asked Lena. When Lena came to do “Billy on the Street,” I said to her, “Do you sleep when you’re working on ‘Girls,’ because I don’t really sleep.” And she said, “Not really.” It was a relief to me that I wasn’t the only person who can’t seem to find enough time in the day.

JK: She does everything I do, plus direct. The directing part of it blows me away. I can’t imagine doing more when I’m there.

Have you figured out any tricks to get through it?
JK: [deadpans] Cocaine.

BE: I think, What would Lake Bell do?

Want a career in comedy? Check out “5 Quick Comedy Tips!”

Are you also worried about auditions? Watch this video for tips!