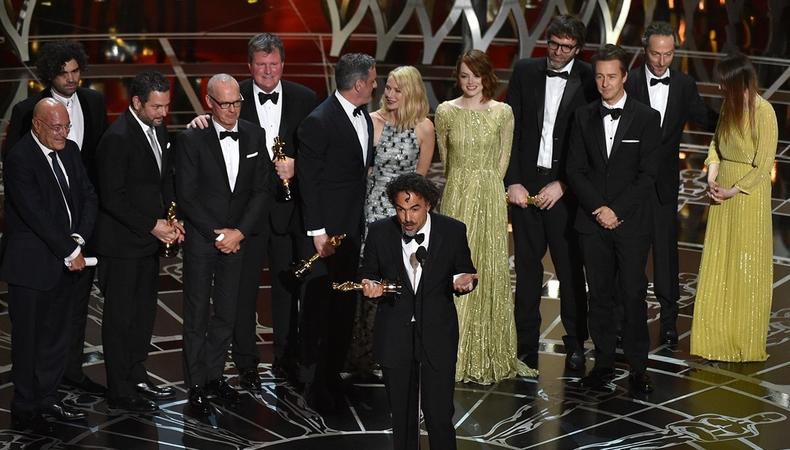 In the standoff between “Boy…” and “...man,” the “Birdman” came out on top last night at the 87th annual Academy Awards, winning four awards including best picture, best director for Alejandro González Iñárritu, best original screenplay, and best cinematography for Emmanuel Lubezki. “Boyhood” left with only one predictable win for Patricia Arquette, who gave a surprisingly fierce and impassioned acceptance speech.

“To every woman who gave birth to every taxpayer and citizen of this nation, we have fought for everybody else’s equal rights,” said Arquette. “It’s our time to have wage equality once and for all, and equal rights for women in the United States of America.”

Julianne Moore locked up the best actress category for her portrayal of a college professor suffering from early-onset Alzheimer’s in “Still Alice,” beating out Felicity Jones (“The Theory of Everything”); Rosamund Pike (“Gone Girl”); Reese Witherspoon (“Wild”); and Marion Cotillard (“Two Days, One Night”).

Backstage cover star Eddie Redmayne won best lead actor for his performance as the ALS-inflicted Stephen Hawking in “The Theory of Everything” with the obvious choice, J.K. Simmons (“Whiplash”), taking best supporting.

“When I was 16 years old, I tried to kill myself because I felt weird and I felt different and I felt like I did not belong,” said the screenwriter. “And now I’m standing here. So I would like for this moment to be for that kid out there who feels like she’s weird or she’s different or she doesn’t fit in anywhere: Yes you do. I promise you do. Stay weird, stay different, and then when it’s your turn and you’re standing on this stage, please pass the same message to the next person who comes along.”

The night was full of politically charged speeches championing for gender as well as racial equality. John Legend and Common performed “Glory” from the otherwise snubbed “Selma,” before stepping up to accept the award for best original song.

“Selma is now because the struggle for justice is right now,” said Legend. “We know the Voting Rights Act that they fought for 50 years ago is being compromised right now in this country today. We know that right now, the struggle for freedom and justice is real. We live in the most incarcerated country in the world. There are more black men under correctional control today than were under slavery in 1850. When people are marching with our song, we want to tell you we are with you, we see you, we love you, and march on.”

Hosted by Neil Patrick Harris, the evening kicked off with a musical tribute to old Hollywood, from “Singing in the Rain” to “Star Wars.” Five-time Oscar-winning film “The Sound of Music” was honored later in the evening with a performance from Lady Gaga, before Julie Andrews presented the award for best original score to Alexandre Desplat (“The Grand Budapest Hotel”).

Meryl Streep stepped out to do the night’s “In Memoriam” segment, where the late Joan Rivers was notably left out; John Travolta apologized to Backstage cover star Idina Menzel for last year’s butchering of her name; and Harris commented on the year’s lack of diversity: “Tonight we honor Hollywood’s best and whitest, sorry, brightest,” he said.

Best Original Song
“Lost Stars,” “Begin Again”
“Everything is Awesome,” “The LEGO Movie”
“Glory,” “Selma”
“Grateful,” “Beyond the Lights”
“I’m Not Gonna Miss You,” “Glen Campbell...I’ll Be Me”

Best Visual Effects
“Captain America: The Winter Soldier”
“Dawn of the Planet of the Apes”
“Guardians of the Galaxy”
“Interstellar”
“X-Men: Days of Future Past”

Briana Rodriguez
Briana is the Editor-in-Chief at Backstage. She oversees editorial operations and covers all things film and television. She's interested in stories about the creative process as experienced by women, people of color, and other marginalized communities. You can find her on Twitter @brirodriguez and on Instagram @thebrianarodriguez
END_OF_DOCUMENT_TOKEN_TO_BE_REPLACED