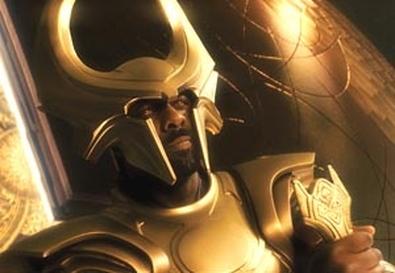 When Kenneth Branagh cast Idris Elba as Heimdall in the upcoming summer tentpole "Thor," a furious debate erupted among fanboys, with some insisting it was wrong for a black man to play a Nordic god.

But the London-born actor has no patience for the debate. "It's so ridiculous," he said Feb. 24 at Rutgers University in Newark, N.J.

"We have a man [Thor] who has a flying hammer and wears horns on his head. And yet me being an actor of African descent playing a Norse god is unbelievable? I mean, Cleopatra was played by Elizabeth Taylor, and Gandhi was played by Ben Kingsley."

Beyond that artistic defense, though, there is an even more basic reason black actors welcome colorblind casting: There is a ceiling on the amount of business black-themed movies can achieve, so the opportunities for black actors and actresses remain limited unless they can also claim parts in mainstream entertainment.

Black-themed movies have established a niche where they can do significant business at the domestic box office, but because they don't travel well overseas, there's a limited number of them.

Tyler Perry has ushered in a new era of black genre pics and provided exposure for numerous African-American stars. His movies have been a boon for Lionsgate, but they also demonstrate the math. Perry's films have grossed a combined $469 million domestically, with an average gross of $52 million.

Screen Gems' "Obsessed," in which Elba starred opposite Beyonce and white actress Ali Larter, succeeded in playing to black and white audiences, but—like other genre movies—it hit a ceiling in terms of total gross, earning $68.3 million domestically, and $5.6 million overseas.

Not long after "Obsessed," Screen Gems teamed with Chris Rock to remake the British comedy "Death at a Funeral"—but with a mostly black cast. The film also starred James Marsden and Luke Wilson, upping its chances of crossing over. Still, "Funeral" did only so-so business, grossing $42.7 million domestically and $6.3 million overseas, mostly in the U.K.

But even though they can turn to such genre films for employment, black actors have been losing ground. In the early 2000s, blacks played 15% of roles in film and TV. Today, it has fallen to 13%, according to SAG. And black directors make up only 4% of the DGA.

This year's Academy Awards offered a stark reminder of the lack of diversity in the movie business; the nominees, both above and below the line, were almost uniformly white. And though 13 black actors have won Oscars in the ceremomy's 83-year history, only two directors have been nominated: John Singleton for 1991's "Boyz N the Hood" and Lee Daniels last year for "Precious."

"I mean, were there any black Academy Award nominees this year? No, zero," says Don Cheadle, who was nominated for best actor for 2004's "Hotel Rwanda." "Is there really a dearth of talent? Who decided that? Who do you point to and get mad at? It's hard to pin down."

People were so desperate for any sign of color at the Feb. 27 ceremony that many media outlets, including the Boston Globe, accepted as fact the rumor that "True Grit" nominee Hailee Steinfeld's mother is part African-American. (Steinfeld's rep told THR that the claim, spread on the Internet in recent days, is erroneous.)

It isn't lost on black actors, though, that Steinfeld, because of her debut performance in the Coen brothers' Western, is already on the list of hot emerging stars that's being closely monitored by power brokers throughout Hollywood. It's harder, and takes longer, for emerging black actors to get on the same roster. Being cast in movies made primarily for white audiences can help exponentially.

For while Hollywood knows the market for black films is circumscribed, it also realizes that black audiences can boost grosses on movies aimed at wider audiences. Studios rely heavily on black moviegoers to turn out for their mainstream films. Blacks, who represent 13% of the U.S. population, buy 12% of all movie tickets, according to the latest statistics from the MPAA.

"The prosperity of the African-American audience is enormous, and they contribute formidably to the bottom line for films like 'Iron Man' or 'Transformers,'" one veteran studio executive says.

Animated films also do huge business among black audiences. In 2009, Disney released its first toon featuring a black princess, "The Princess and the Frog," and it grossed $267 million worldwide.

Seeking out roles, regardless of color, allows black actors more opportunities and the chance to build a following among general audiences.

When Anthony Mackie set his sights on playing Sgt. JT Sanborn in Kathryn Bigelow's "The Hurt Locker," he and longtime manager Jason Spire had some convincing to do. The part was written for a white male.

"That was the play we decided we were going to make," recalls Spire, who signed Mackie when the actor was attending Juilliard and Spire was still an agent at Gersh. "Unless there is actually a reason why a role has to be a certain color or a certain ethnic background to be pivotal to the story, in my opinion, all roles should be colorblind. There's no reason why they shouldn't be."

Although Mackie had worked in film for nearly a decade, starring in a number of acclaimed indies, it was only after his performance in eventual best picture Oscar winner "Hurt Locker" that doors began opening wider. He has a substantial role in Universal's "The Adjustment Bureau," opening March 4, playing a guardian angel to Matt Damon's character. And in February, he closed a deal to star in one of Hollywood's more high-profile studio projects: Fox's "Abraham Lincoln: Vampire Hunter."

Jackson is another up-and-comer who has benefited from colorblind casting, having played a Greek satyr in 2010's "Percy Jackson & the Olympians: The Lightning Thief."

But actors like Mackie and Elba still face a tough road in trying to emulate the statesman status of A-listers such as Will Smith, Morgan Freeman and Denzel Washington, who have succeeded—against tough odds—in transcending racial barriers.

Smith has become one of the world's biggest box-office draws, debunking the commonly voiced notion that black stars can't travel overseas. His films have grossed $2.52 billion worldwide, not far behind the $2.87 billion collected by Tom Cruise films.

"I think it's interesting that the only lock in this business is Will Smith," Cheadle says. "But he didn't break out until [1997's] "Men in Black," when Sony put its full power behind him."

Freeman fought for, and won, the chance to play the role of Red in Frank Darabont's "The Shawshank Redemption," which earned him an Oscar nomination for best actor in 1995. In Stephen King's novella, Red was a middle-aged, balding Irishman.

Darabont has said in interviews that he always had Freeman in mind for the part because of the actor's demeanor and voice.

In the 2004 remake of "The Manchurian Candidate," Washington was cast in the title role of Maj. Bennett Marco, the character played by Frank Sinatra in the original. The casting raised eyebrows, but the film went on to gross north of $96 million worldwide.

Taraji P. Henson, who was nominated for an Oscar for her performance in 2008's "The Curious Case of Benjamin Button," says there is still a certain mind-set in Hollywood that keeps studios from casting a wider net and using actors of different ethnicities. And until that changes, opportunities will continue to be limited.

"We are petitioning in negotiations for a role they weren't even thinking about. They're just indifferent," she says. "My people question why a character has to be black, or anything."

Most say Hollywood needs to do a better job if it is to reduce the glaring disparity in terms of the number of blacks onscreen and behind the camera.

In an interview with THR, Singleton says that with expanding diversity in this country and a globalized consumer audience, he hopes that the entertainment industry will cultivate markets for performers of color—men and women—and take the same risks that are taken with white artists.

Television arguably has a better track record in terms of colorblind casting. Diversity became a popular story line about a year ago, when the tide turned at the broadcast networks. (It wasn't a surprise when media outlets began to label it the Obama Effect.)

Although the five networks still carry a lack of programming specifically geared to an African-American audience—a void left by UPN's exit and filled only on cable by TBS and BET—their slates increasingly feature minority leads.

Cheadle has personal experience with colorblind casting. The role he plays in the upcoming Showtime series House of Lies was written for a middle-aged Jewish man.

But it doesn't mean he wants to hide who he is, or his cultural background.

"A white Jewish guy in the part would play it differently," Cheadle says. "I want to make a virtue of that difference. Don't make me uncomplicated. Dogs are the only things that are colorblind, and even they see shades."

"Tower Heist" (Nov. 4): Director: Brett Ratner. Starring Eddie Murphy.?A group of hardworking guys decides to pay back a businessman who has swindled them.

"We the Peeples" (November): Director: Tina Gordon Chism. Starring Kerry Washington, Craig Robinson and David Alan Grier.?The family of a psychologist's girlfriend is in desperate need of his help.

"The Butler" (2012): Director: Lee Daniels.?Despite Daniels' two Oscars for "Precious," he is still trying to raise funds for this true life tale of White House butler Eugene Allen, wich may come through soon. He's also working on the casting of his Martin Luther King Jr. film "Selma." Daniels calls the black-averse Hollywood system "An atrocity. I think it's a shame. But you know I know my place—it's a disgrace."