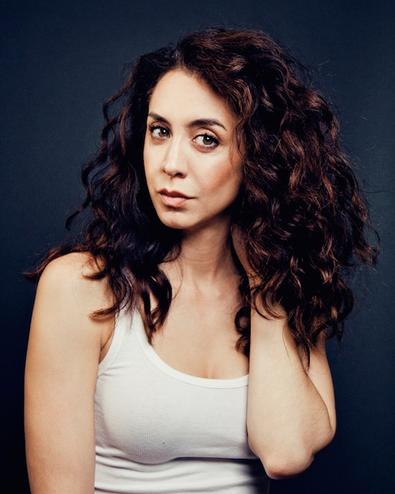 On getting an education.
Before studying at the prestigious Yale Drama School, Marno earned an undergraduate degree in French and German comparative literature— something she says has helped her as an actor and “as a human.” She warns, “I do think it is a little dangerous for kids to graduate from high school and study acting, never go anywhere, never travel anywhere, just sort of have this tunnel vision focus on one thing.

“Acting is character excavation; whatever you can do to have more and varied perspectives and sensitivity to psychological nuance helps you as an actor,” she adds. “In my case it was traveling and reading books, learning languages and being involved in the other arts—photography, music that kind of thing. I wouldn’t say this is the recipe for how to become an actor, but for me I needed to go to undergrad and have a liberal arts education and exercise all of those other interests—sort myself out intellectually.”

On her first time on set.
“I had such crazy first experiences. My first experience in television was this tiny role on ‘The Unit,’ and that episode was written and directed by David Mamet! So it was completely bizarre to have my first television gig be with someone like that. He was very kind. It was a really positive experience, but I was so nervous I was frozen—I had to take a beta-blocker! Because you walk onto the set and you have no idea what everybody does. There are all these people measuring the distance from you to the lens and miking you and booming you and everything and you don't know what's happening. Fifty-thousand people in a room and you’re, like, ‘God I hope I don’t screw up my lines and hold all these people up!’ ”

On how writing informs her acting.
Marno’s first feature-length screenplay “When the Lights Went Out” was adapted for stage and premiered at New York Stage & Film in 2013. When asked how creating her own work has affected her acting, Marno laughs. “It might make me a tiny bit more of a pain in the ass as actor frankly. I want to influence what I’m doing in a different way. I’m looking at the whole structure and what my part is in the structure. Instead of just kind of looking at things locally, I think you look at a piece of work a little bit more globally.”

On joining the established casts of two hit TV shows.
“On ‘House of Cards’ it's different because you're on location, and when you’re on location you just you become fast friends with people. You wrap and you’re, like, ‘I’m kind of lonely in my hotel room in the Marriot in Baltimore…do you want to hang out with me?’ Everyone kind of bands together in a different way. You meet someone and then five hours later you’re having dinner, you’re ordering room service and chatting about the day. Who else are you gonna hang out with?

“With ‘The Blacklist’ we all live in New York, so we all go home to our own homes and our own pets and our own friends and our own partners,” she adds. “It’s a little different: You kind of get to know each other slower. In both cases I’ll say I’m pretty extroverted and so it’s sort of easy for me to wedge myself between two people and be, like, ‘What’s going on? Who are you?’ I definitely think my colleagues on ‘The Blacklist’ were, like, ‘Whoa she asks a lot of questions!’ …but now they love me.”

On typecasting.
With her résumé built on strong, intelligent women, Marno’s latest roles are no different. The actor sees typecasting as an essential part of the business, but something many established actors try to rise above. “You know I’m nearly 5’10” and have a deep voice and sound like a smart person, and so I never played ingénues. I just skipped it—I skipped Juliet and went straight to Gertrude! Even when I was 20 I never played those roles.

“I was 22 or 24 in graduate school and I was playing the moms, because I was the tallest and I was the most authoritative in some way. I think it’s a type thing, and then once you do a couple of roles like that, they’re on your reel and people are like ‘Oh, she can do that, cast her this way!’ But also, I do read scripts and think, You know this doesn’t speak to me and I don’t think I’ll do a good job. And I'll pass…and it’s usually if the character is a ‘blah girlfriend’ and has nothing going on, or is just sort of pretty and dumb. I don’t really even feel like I can do much with it…. So I think it’s both. I’m hoping that when my career progresses I’ll have more and more agency and I’ll have more and more choices,” she says.

On building a long-term career.
With a career spanning film, television, and theater on both coasts, Marno offers valuable advice for young actors seeking the same longevity. “It’s so different for everyone, but you need to have training. One-hundred percent go take a class—but for a while! Don’t just take a 4-week class and think, OK, now I’m an actor! I think continual training is useful; it will help you as you continue to work more and more,” she says.

“And have an active plan to manage your downtime. Part of the reason I left L.A. and went back to New York is that I wasn’t very good at managing my downtime in L.A.; time passed and I was, like, ‘What am I doing?’ And here [in New York] I’m just so much more active. I think if you have a system in place where it’s, like, ‘OK, on Saturdays I play tennis, and on Tuesday nights I take my Spanish class’ or whatever it is—those periods in between jobs need to be structured. Jobs end. I mean that’s what this world is. We’ve chosen to be in the circus! You get a gig and then a month or two or, in my case, nine months later it can be over. If you can find those ways that you can tether yourself to another activity or a community of people or other structures…I think it’s necessary.

“I labored over this decision of whether to move back to New York for a long time, and then my career really ended up taking off when I moved back here. I really think it’s an energy thing. I think wherever you’re happiest, you’ll attract the work you are supposed to get. You should go where you feel good, and then you will bring that into a room.”