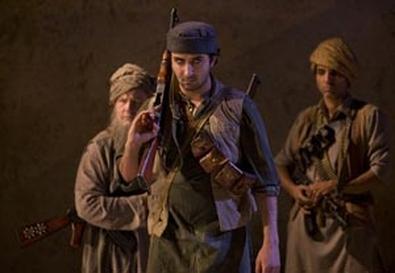 In "Blood and Gifts," playwright J.T. Rogers takes a bracing, multisided look at how America came to be mired in a war against fundamentalism in Afghanistan. Rogers' pungent writing is full of sharp characterizations as it painstakingly charts how decisions made with even the best of intentions can lead to chaos. Add the requisite number of self-serving choices, and it's a wonder that anything positive ever gets accomplished. Evoking such writers as Graham Greene and John le Carré, Rogers nevertheless asserts a unique voice in this gripping and absorbing drama.

The play begins in 1981, as American CIA agent James Warnock arrives in Islamabad, Pakistan, with instructions to begin fueling a proxy war in neighboring Afghanistan by pitting warlords against the occupying Russians. Warnock must contend with both his Russian and English counterparts, corrupt government officials who are in bed with religious fundamentalists, and feuding warlords, not to mention an unseen wife back home who is anxious to start a family. He settles on one particular chieftain, Abdullah Khan, for an ally. Though a pious Muslim, Khan says that he fights for Afghanistan, not for God. Khan and Warnock develop a tight bond, but ultimately they are not fighting for the same goal. America's purpose is to break the Russian military and end the Cold War; Khan is fighting for a free country. So when America successfully drives out the Russians and abandons the Afghans, things get sticky.

Bartlett Sher's direction crackles and pops, keeping this two-and-a-half-hour show moving with inexorable force. Heading the 14-person all-male cast is Jeremy Davidson, who puts his clean-cut all-American handsomeness to good use in portraying Warnock. Davidson creates a man who is used to getting his way and being part of the elite, which engenders a self-confidence that's not always an asset, something the actor counterbalances by stressing Warnock's intelligence and decency. As British agent Simon Craig, Jefferson Mays freshens the stereotype of the self-loathing, alcoholic functionary in an admirably idiosyncratic and intense turn. The slight trace of a lower-class accent that haunts Simon's King's English when he is at his most agitated is a nice touch. Michael Aronov is memorable as Russian agent Dmitri Gromov, cheeky and provocative, fascinatingly loose-limbed, an unnervingly friendly foe who seems constantly on the boil.

Bernard White and Pej Vahdat, as Kahn and his most trusted lieutenant, the American-pop-music-loving Saeed, create a strong, unshakable connection between the two men. White's Kahn is a rigorous man of honor who seems straightforward yet retains an air of mystery, a combination that serves the actor well in Kahn's final act of desperation. Vahdat mixes a youthful impatience with a wounded sense of being treated by foreigners as an inferior, leaving us always wondering when he may explode. Also making a strong impression are John Procaccino as Warnock's crusty stateside boss; Robert Hogan as a flinty conservative U.S. senator with a highly inflated sense of self and a sentimental streak a mile wide; and Gabriel Ruiz as a greedy Pakistani official bent on fomenting holy war to keep Afghanistan weak.

Michael Yeargan's enveloping set is dominated by a beautiful Middle Eastern mosaic floor that always reminds us on whose turf this battle is being fought, even when the scenes are taking place in Washington. He also provides benches ringing the thrust stage, from which characters observe scenes that they are not in. Though I was sometimes mystified by Sher's choices of who is watching what, the device does bring a welcome impressionism to the naturalistic proceedings, particularly when characters are talking about an absent character while deliberately looking straight at him.

Rogers expanded this work from a one-act that he wrote for England's Tricycle Theatre's excellent marathon production "The Great Game: Afghanistan," which came to America with a replacement play in Rogers' slot. There's not an ounce of padding, though. This is one case where more is definitely more.