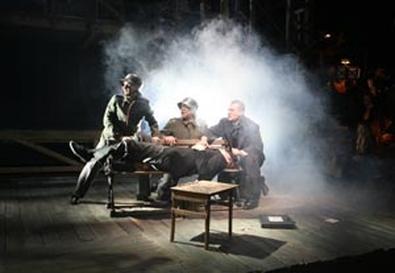 Photo Source: Ari Mintz
As the first act of the strangely captivating "The Blue Flower" continued to unfold, part of my brain started searching for a way to characterize its unusual form. Suddenly, I had an odd thought: It's as if Hans Richter made a musical. Richter was an avant-garde German filmmaker with Dada roots who made the first full-length surrealist film, "Dreams That Money Can Buy," in 1947. So when in Act 2 the characters attend a licentious party at which the host screens Richter's 1928 abstract animated short "Vormittagsspuk" ("Ghosts Before Breakfast"), I figured that perhaps I wasn't too far off the mark. But to properly enjoy this insinuating, intensely creative show, you need to put aside intellectual questions and simply take the ride. Exotic and playful, suffused with empathy, this "Flower" blooms with a haunting beauty.

Husband-and-wife team Jim and Ruth Bauer (he did the script, lyrics, and music; she did the script, videos, and art) follow a group of four friends—German artists and best pals Franz and Max, Swiss performer Hannah, and Polish scientist Maria—from their early days as expatriates in Paris through two world wars, as they develop their talents, foment political change, and passionately love each other. Both Max and Franz fall for Maria, who chooses Franz, with Max taking up with Hannah on the rebound. Franz's death in World War I devastates them, but they thrive under Germany's Weimar government, until the rise of Hitler stifles and scatters them. Max's fame gets him a job teaching in America, and the Bauers tell their tale from the vantage point of his death in New York City in 1955. The formal and serene Mr. O appears to greet Max and guide him through his life's journey.

Director Will Pomerantz orchestrates the many elements into a spellbinding whole and elicits powerful performances from his four leads—Marc Kudisch (Max), Sebastian Arcelus (Franz), Meghan McGeary (Hannah), and Teal Wicks (Maria)—extraordinary singers who also create impressively detailed psychological portraits without the aid of naturalistic writing. Much is communicated in looks and gestures, and all have strong musical moments in which to land their characters. Kudisch excels in Max's second-act breakdown after losing Hannah, when Max lapses into his self-created language of Maxperanto, never again to return to English. McGeary is cunning and cutting in Hannah's Dada performance routines (think a period Maureen from "Rent"). Arcelus is achingly sad in "Heaven," Franz's sung letter from the front, and Wicks soars on the moving Act 1 closer, "Eiffel Tower," in which Maria deals with Franz's death.

The Bauers' formalistic, presentational script, in which narration often dominates, heightens the evening's sense of reserve yet somehow never obscures character. Mr. Bauer's ravishing music, which he has orchestrated himself, mixes appropriate period influences with arresting contemporary sounds and rhythms, emotionally enveloping the show. Ms. Bauer's trenchant videography complements and heightens the action, mixing original work with period film clips, and her art for Max and Franz is both striking and character-defining. Only Mr. Bauer's expressionistic lyrics disappoint a bit, not for their content, which is rich and evocative, but for their craft. Sloppy rhyming, elongated syllables, and misaccents too often impair clarity.

Like Richter's films, the Bauers' musical is an experiment more likely to influence than enter the mainstream. But if you're up for an adventure, this exhilarating show more than fills the bill.