Under the Blue Sky 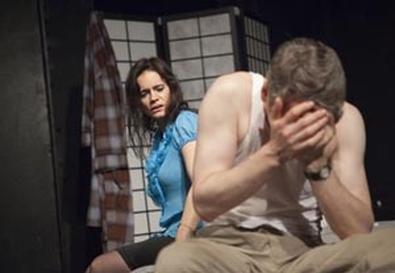 There are no elaborate set changes in Mind the Gap Theatre's production of David Eldridge's "Under the Blue Sky." None of the actors wears a flashy costume. The lighting is utilitarian. But what the production does offer are six multifaceted performances by sterling actors who unflinchingly re-create heartbreak, disappointment, and wary hope.

Set in Britain and divided into three sections, the play follows a trio of couples, beginning with teachers Nick (Stuart Williams) and Helen (Sarah Manton) discussing Nick's decision to leave his job for a cushier position. Later, Eldridge introduces colleagues Michelle (Elizabeth Jasicki) and Graham (Jonathan Tindle) and friends Anne (Christine Rendel) and Robert (Richard Hollis), all of whom are connected in complicated and surprising ways.

What director Paula D'Alessandris and her cast have created in this New York premiere is a low-fi production that puts the emphasis firmly on the fine performances. Each couple must come to terms with what they mean to each other and the often overly exacting demands they make. Helen is desperately in love with Nick, who blithely uses her to bolster his self-esteem. Michelle is garrulous about her liaisons with the retiring Graham, who carries a torch for her. Anne and Robert, despite the 20-year difference in their ages, fight their growing attraction.

Heartbreak is the leitmotif, and the three women, particularly, find startling new ways to convey it. Jasicki, given the flashiest role as a promiscuous teacher, has a lengthy monologue in which she gets progressively drunker, reminiscing about all her former flings while parenthetically insulting Graham hilariously. Rendel has a lovely, contemplative speech about a lost love that works beautifully in D'Alessandris' quiet staging. There are big moments and plenty of opportunity for overacting (knives are pulled, Michelle's drunk scene teeters on the brink of sketch comedy), but D'Alessandris and her cast ruthlessly avoid any choices that could overwhelm the script. What their mutual efforts have created is a melancholy examination of the connection between friendship and love that is almost excruciatingly intimate.