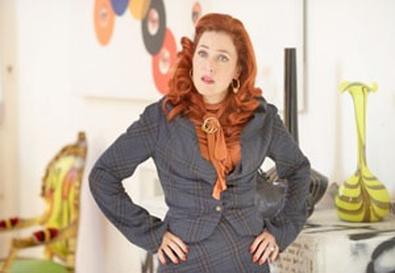 The late Robert Altman is missed, noted by merely sitting through "Boogie Woogie," an Altmanesque ensemble soap opera that pretends to be an exposé of the machinations of the world of modern art but really is just an excuse to let a large bunch of fine actors wallow in sexual high jinks and go-for-broke melodrama. Altman is the one director who probably could have pulled this multistoryline trash off. First, he would have tossed the lousy script (Danny Moynihan, adapting his own novel) and encouraged his stars to improvise. What worked so well for "Nashville," "MASH," and "The Player" is lost on director Duncan Ward, who uses his own expertise in this area to transfer the art scene to the screen and then lets it all go to pot—as in potboiler.

Be warned: If you sit through this thing, you're going to need a scorecard just to keep all the players straight. Okay, some are gay; we're getting to that. The tales revolve around devious in-the-closet art dealer Art Spindle. Played by Danny Huston, he's in the business of sweet-talking collectors into parting with their most prized possessions for a price and then recycling them for pure profit. His big goal is to buy a major piece called Boogie Woogie from decrepit old art fan Alfred (Christopher Lee), who won't let go of it, even while Alfred's much younger wife, Alfreda (Joanna Lumley), is plotting to do just that by dangling it in front of serious collector Bob Macclestone (Stellan Skarsgard), who is sleeping with Spindle's about-to-quit gallery director Beth (Heather Graham) while being unhappily married to Jean (Gillian Anderson), who is having an affair with hotshot young painter Jo (Jack Huston), who is hot on gallery assistant Paige (Amanda Seyfried in a seductive role). But back to Beth. Did we mention she's also involved in a weird way with video maestro Elaine (Jaime Winstone), who is recording her every perverted move for a lesbian-video-art-some-people-might-label-it-porn show? Then there's Alan Cumming's Dewey, who is gay and troubled. The whole thing becomes terribly complicated when Jean decides to ditch Bob and Bob gets even by letting Spindle sell all their priceless art. It goes on. We won't.

It's a shame most of this transpires with the sleaze factor of a Jackie Collins novel, because the pretentiousness of the modern art world is one that really could crackle if the right filmmakers called the shots. For some reason, scripter Moynihan has decided to switch author Moynihan's original New York setting to London, but it doesn't matter. This is more about getting a piece than getting a masterpiece. The large cast does what it can with the material, although some actors manage better than others to pump life into the thing, particularly Huston, who is hilarious as the not-to-be-trusted dealer. Anderson is also amusing in a role far from "The X-Files" and closer to X-rated, especially when she lands on her knees in an elevator with the unzipped Jo). And here's a shout-out to the always brilliant Charlotte Rampling, who appears all too briefly as Jean's go-for-the-balls lawyer but classes up the joint for those few moments she's onscreen.