How to Book Work Now! 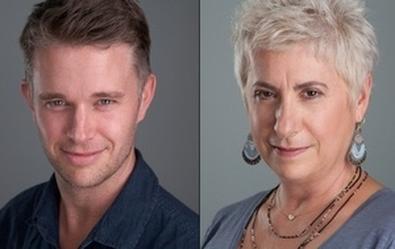 Pilot Season. Are you over it yet? Either you've been auditioning like crazy and are up to your eyeballs in "sides" and traffic on the 405 or you're watching the party from the outside and struggling with the notion that your dreams aren't coming true while time ticks steadily away. Hell, even if you booked something you can't really enjoy it because it cost you a good-sized ulcer, and now you have to actual be as brilliant as the network demands you to be.

This is not an easy time of year. For everyone.

And because it's not easy, actors want answers. They want to know how to crack this code, to make it less painful, less traumatic, less ulcer-inducing. Many of you are on a desperate search for "The Formula" and you fill that desperate need with acting schools, coaches, instructional videos, etc. that may or may not offer tips and tricks to cracking that code. They'll teach you how to walk into the room, how to make the right choices, how to deal with your fear, etc.

But let us drop some real talk on you for a quick sec. There's no code. No formula. Unless you learn to fall madly in love with nothing more than expressing your art in random audition rooms and release yourself of a results-oriented approach to the audition, you're sunk.

Our office is a madhouse – we're casting a TV series and a pilot at the same time. Hundreds of actors sit in our waiting room every week hoping to be the next big thing. Hundreds of calls and e-mails from production, network, studio, writers, agents and managers inundate our phone lines and inboxes every day. Everyone is second guessing. The tentacles of each project stretch for miles, branching off and multiplying daily. It's a pressure cooker of time constraints, diverging creative ideas, and temperaments. The office is a buzzing hive of activity, and each decision that’s made here is important to the project and those involved in it.

And then you walk in – you in your bubble of fear and need. Desperately wanting them to love you so your self worth and your bank account won't exceed a limit of shame that would cause you to throw up your hands, take up drinking, and think about the real estate exam.

Trouble is, it's not about you. It never is. The business isn't disrespectful; it's indifferent. This industry is the purest example of a corporation not being a person. These networks, these studios, these production companies, they don't care that you got the sides last night. They won't take the time to understand that you had another audition in Santa Monica 10 minutes earlier or that the reader didn't do what you wanted her to do. The purpose of CBS, FOX, or Warner Brothers is not to make sure you're OK. And what about these directors, casting directors, producers, and writers? Even the most creative and generous among them need to pay their mortgage and put their kids through college. Their careers are riding on this. They're not here to make sure that you're validated or that you feel special. And nor should they be. It's not about you.

And here's the harsh truth. If you think it is about you or if you are trying to get them to care or are even severely put off by the fact that they don't, you're in your own way. You're focused on something other than the work, and you probably won't book the job. The only person who is responsible for your feelings is you. And taking care of you in the audition process starts with expecting nothing from the process other than the pure, unmitigated joy of having an amazing human experience with a stranger in some tiny office on Riverside Drive. That's not limiting your dreams; that's removing all the desperate, obsessive, "I hope daddy loves me this time" ridiculousness that puts you in your head and kills your artistry. That's being an actor.

We offer an 8-week class at the BGB Studio called The Audition Experience. Invariably actors sign up looking for "The Formula." "What do I have to do to book more work?" What we do in class one is dispel the notion that there is a mathematical answer. And that doesn't always sit well. When an actor realizes that such question has no real answer and that all each actor has is the glorious struggle – that profoundly satisfying exploration that leads to discovery and growth – it takes some adjusting. But, once adjusted, our actors discover the source of their power. By letting go, giving up control, and submitting to their artistry, they discover that they have the power to walk into any audition room and deeply affect everyone in it.

So after you've spent years desperately searching in vane for the math, after the nerves and fear have consumed you with bitterness and you've gone too long without your voice being heard, give in. Give up control. You won't change the industry. It's not worth your time changing it. All you have is your unique experience in the world of the play. And how absolutely amazing is that? Fall in love with this process.

When Al Pacino was broke and living in New York, his friends would often ask him how his day went. On days when he had an audition – even for some ridiculous project that didn't deserve his talent – he would answer that question by genuinely lighting up and exclaiming, "Great! I got to act today!"

There's so much to love about what you do. Remind yourself what that is and then choose to fall for it all over again.

And if you're having trouble remembering, give us a shout. We're here to help.

For the past 30 years Bramon Garcia has worked consistently as a director, producer, casting director, writer, and teacher. She directed the cult classic, "200 cigarettes," and most recently, "The Con Artist." She directed extensively in theater and TV. Her casting résumé includes more than 65 feature films, including "Something Wild," "At Close Range," "Angel Heart," "Fatal Attraction," "Wall Street," "Jacob’s Ladder," "Born on the Fourth of July," "JFK," "The Doors," "The Joy Luck Club," "True Romance," "Speed," "How To Make An American Quilt," "Dead Presidents," "Twister," "Benny and Joon," "Flirting With Disaster," and "Roseanne". Currently she's casting the Showtime series, "Masters of Sex." Her website is http://risabg.com/.

Over his 15 year career as an actor, Braun has starred in such movies as "Harold and Kumar Go To White Castle," "Wrong Turn 2," and "The Trip" and been a series regular on such TV shows as "The Immortal" and "Twins." He has recently guest starred on "CSI: Miami," "CSI: NY," "Bones," "The Closer," "NCIS," and "The Mentalist." In 2007 and 2008, Steve worked Barack Obama’s campaign for president. For the last ten years, he's taught his method of achieving truthful emotional expression to actors of all levels. His website is www.actingthetruth.com.

Risa Bramon Garcia
For the past 40 years, Risa has worked as a director, producer, casting director, and teacher. Having directed two features—including “200 Cigarettes”—she has also directed for TV and dozens of plays in New York and Los Angeles. Her casting résumé includes more than 80 feature films and shows, and includes “Desperately Seeking Susan,” “Fatal Attraction,” “JFK,” “The Joy Luck Club,” “The Affair,” “Masters of Sex,” and the original “Roseanne.” She is a founding partner of The BGB Studio, known for revolutionary acting training.
END_OF_DOCUMENT_TOKEN_TO_BE_REPLACED

Steve Braun
Steve Braun is an acting coach, teacher, and communication consultant, drawing on years of acting, Buddhist practice, and martial arts training to help his clients discover and express their unique emotional truth. When he pursued an acting career, he starred in movies, was a series regular many times, and guest starred on numerous TV shows. He is a founding partner of The BGB Studio, known for revolutionary acting training.
END_OF_DOCUMENT_TOKEN_TO_BE_REPLACED