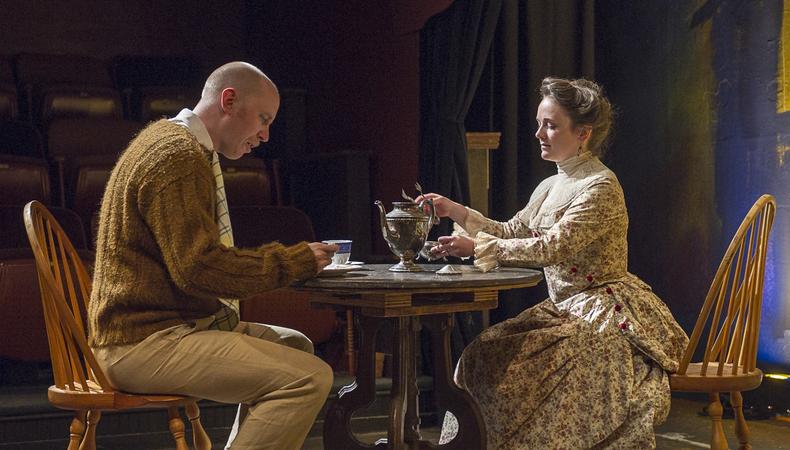 In “The Boss” we have a 100-year-old play that resounds with contemporary echoes. It is a study of rugged and unscrupulous individualism run amok. Sound familiar? The author, Edward Sheldon, one of America’s most overlooked playwrights, combines a social conscience with a flair for storytelling that still makes for compelling theater. Yes, there are melodramatic elements, but one of melodrama’s better aspects is that it moves, and here we have a weighty subject that just skips along. In direct contrast to the melodrama, Sheldon also has a talent for complex characterization; he marries most interestingly public matters with personal issues. With America’s persistent and unsavory habit of wishing to bury its social and artistic pasts, it has been left to the intrepid Metropolitan Playhouse to excavate “The Boss” and introduce us to Sheldon and his turbulent 1911 world.

Michael Regan (Dave Hanson), an Irish scrapper from the slums, has taken over the grain shipping industry that is the backbone of a Great Lakes city. This he has achieved by exploiting the workers of the very class from which he has risen, as well as using strongman tactics to muscle out any competition. We meet him as he is threatening to take over the grain contracts of the established James Griswold (Richard Cottrell) and his son, Donald (Erik A. Gullberg). He is succeeding until it is revealed that Regan is in love with the daughter of the house, Emily (Meghan Hoffman), a patrician young woman who devotes herself to social activism in the city’s poverty-stricken fourth ward. Regan offers a compromise, but will Emily marry him? This is only the beginning of a fast-moving plot, with the relationship of Regan and Emily consistently twisting in the wind.

Regan is shown at both his thuggish worst and loyal best in strongly written scenes with his henchman, “Porky” McCoy (Joel Rainwater), and boyhood friend Archbishop Sullivan (John Fennessy). Sheldon invests Regan and Emily with nicely complicated contradictions, so that a dramatic romantic tension is ever present. The corn-fed theme of “the love of a good woman” is present but cleverly disguised with a layer of thorns.

With the acutely observed characters of Regan and Emily, Sheldon has created two juicy roles. Under Alex Roe’s fluid direction Hanson’s Regan is a convincing bundle of ruthless energy and anger, only likable as the clueless lover. This contrasts winningly with Hoffman’s Emily, a Shavian New Woman of fewer words, a pleasing combination of steel and charm. In a large cast, both Rainwater and Fennessy score well, while there’s a most endearing portrait of a faithful servant, Gates, from Howard Thoresen. Students of American history, both social and theatrical, should avail themselves of this opportunity to meet Sheldon and “The Boss.”