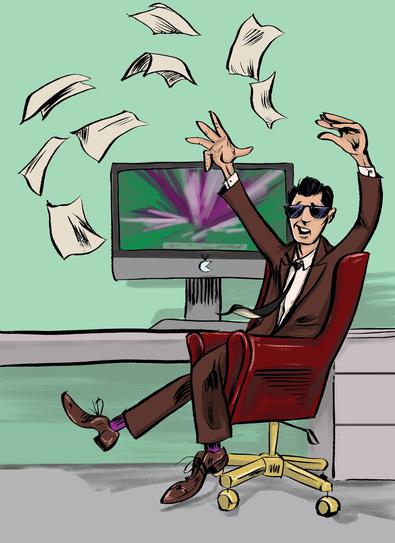 Most actors who read this column are familiar with breakdowns, but for those of you who aren’t, here’s a quick primer on one of the most essential parts of the casting process.

Once upon a time, prehistoric agents wearing loincloths (designed by Armani) would drive from casting office to casting office, pitching their clients in person. That changed in the ’70s, when a young man named Gary Marsh started a company called Breakdown Services. His business plan was to create listings of every single project that was actively looking for actors. Casting directors would send him the details, Gary’s minions would create a “breakdown” of every character, and that information would be released to every agent in town.

When I started, breakdowns were physical sheets of paper that were delivered to our office by 9 a.m. We used to spend the entire morning working on them, our assistants would then stuff envelopes with pictures, and a messenger would deliver those submissions to the casting directors.

Now, breakdowns are posted on a website and we make electronic submissions. This saves actors a fortune on pictures and it saves us a bigger fortune on messenger fees. Best of all, casting directors get our ideas mere minutes after their breakdown is released.

It’s a great system and I couldn’t do my job without it. But as much as I love the breakdowns, the language can be a little funky. Here are some examples:

A lot of breakdowns are marked “Submit Online Only.” When I see this, I have to wonder what year we’re living in. Do casting directors think agencies still have messengers on standby, just in case a breakdown appears that reads “We Only Accept Hard-Copy Submissions”? I guess it could happen, but more likely you would have to hop in a DeLorean and go back in time to see a breakdown like that.

In the world of episodic television, there are basically three role types based on size and importance. A guest star is at the top with good pay and billing in the main titles. Co-stars are next and they’re significantly smaller; those parts usually pay scale and the billing always appears during the end titles. And last and certainly least is a featured role, which is just another name for a day player with a line or two.

Most of the larger agencies only submit on guest stars because their clients won’t settle for less. So some casting directors like to play with language when they’re listing a smaller part on their breakdown. For instance, a recent breakdown for a one-hour drama had three co-stars on it. The first was labeled: “This is an excellent co-star role.” The second was labeled: “Good co-star role.” And the third was labeled: “Co-star role.”

There are a lot of breakdowns released for feature films in various budget categories. The funny ones are the breakdowns for low-budget movies that are seeking “Star names only with an international following. Role pays scale plus 10.” Yeah, good luck waiting for CAA to submit Brad Pitt.

Sometimes, the person who writes the character breakdown has no consideration for an actor’s feelings. Do you have any idea how hard it is for me to call a client and explain that he has an audition for a role described as “a fat slob who is one meal away from death’s door”?

I can’t imagine life without the breakdowns and I’m sure they will continue to evolve. It’s just a matter of time before Gary Marsh starts beaming them directly into our brains. Boy, won’t that be something?