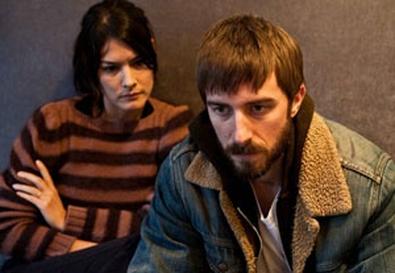 Photo Source: Hank Jeffries
Parent-child conflicts make for great drama. Everyone has parents, and it's not too much of a stretch to say that everyone has had some conflict with those authority figures. While Victor Kaufold's play is believable, it's not compelling. The piece has no inciting incident, and the show simmers, attempting to boil but never quite climaxing.

Set in a Bridesburg, Pa., a small blue-collar town with too many chemical plants, the Burzynski family lives in an old row home that's situated between two of them. Their father left when Cat, now 18, was born, and Cat; her older brother, Matt; his pregnant wife, Kay; and their mother, Janet, live together. The situation is fairly typical considering the current economic climate, but both children resent the hand they've been dealt. Matt hates living at home but needs to save money for the baby, and he is constantly suspicious that his mom is stealing his money. Cat plays hooky from school and talks back to her mother more harshly than most teenagers would. Kay feels trapped by her pregnancy, and it's unclear how she ended up with Matt in the first place. Meanwhile, their offstage grandfather is dying, and no grandkid can give him the time of day. Basically, it's a pretty depressing scene.

Nothing much escalates beyond this mess. Kay questions whether she should stay with Matt. She alludes to her own troublesome family, but we never learn anything else about her situation. She's far too good for Matt, and though she dropped out of college, she seems like she could make it. It doesn't make sense that she has only begun to question this relationship. Mizuo Peck does what she can with the character, but Kay's shiftless behavior makes her difficult to relate to. Matt doesn't do much more than mope around, and Jeff Barry looks the part in Michelle Tarantina's nice costumes, but he can't give his directionless character dimension. As Janet, Susan Ferrara pulls off frazzled single mother well, and her frustration feels genuine. However, she too often substitutes shouting for true emotion.

Director Jack Young maximizes the small space with its three settings—a home, a construction site, and a strip mall—well and fills out the stage on two levels, aided by Miriam Crowe's subtle lighting. Audience members practically sit in the family's living room as the drama unfolds, and Young keeps his actors flowing throughout the space. However, no emotional core resonates, and most performances come up short, with the exception of Brianne Moncrief as the fast-talking and frustrating high schooler Cat, determined to ruin her life. Moncrief channels the character's angst and delivers an entertaining performance. Julian Joseph is charming as her friend Mitchell, and his straight-laced character might be the only redeeming one in the play. However, he only appears on the periphery.

The play's pinnacle moment fizzles, and the fighting, both physical and verbal, comes across as forced. The characters' motivations are murky, and their breaking points are not entirely believable. I just kept wondering why these deep-seated issues hadn't come up before.