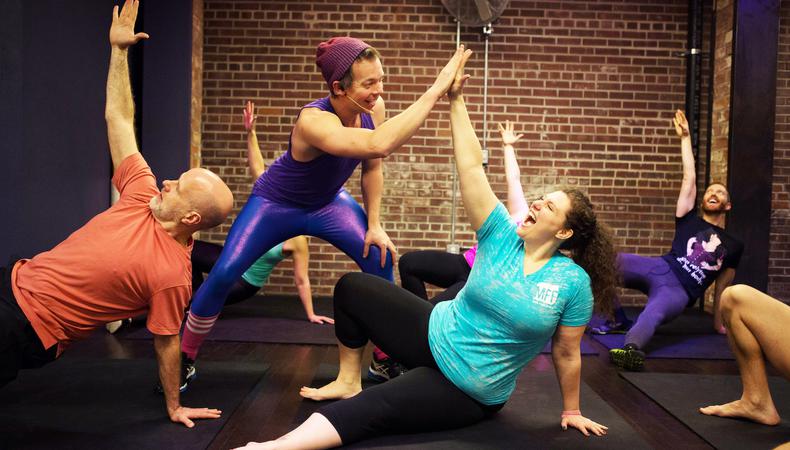 “It’s very clichéd,” says Mark Fisher, “but for actors, your body is your instrument.”

That old adage, however, is about the only clichéd aspect of the NYC fitness guru’s philosophy toward personal health. Asked why his clients at Mark Fisher Fitness are referred to as “ninjas,” Fisher responds, “I’m a very enthusiastic person, and when I teach—I don’t want to say I speak in tongues, but I say a lot of crazy shit. We’d be in class, and I’d be, like, ‘You’re fuckin’ ninjas!’ For whatever reason, that particular image stuck with them.

“ ‘Unicorns’ came about sort of the same way,” he adds. “They’re our mascot, our spiritual symbol.”

When he co-founded Mark Fisher Fitness in 2011 with childhood friend Michael Keeler, Fisher couldn’t have dreamed it would become a miniempire. The midtown Manhattan gym, or as the Ninja Master’s students call it, the “Enchanted Ninja Clubhouse of Glory and Dreams,” is particularly popular among those in the performing arts community looking to get a “Broadway Body”—and keep it. Championed by the likes of Jerry Mitchell and frequented by such Broadway stars as Brynn O’Malley, Susan Blackwell, Patina Miller, Christopher Sieber, Billy Porter, and Andréa Burns, MFF is sometimes even written into theater actors’ contracts.

“I spent a few years as a very mediocre but enthusiastic dancer,” explains Fisher. “Throughout my 20s I was balancing my work as a professional actor with personal training on the side. However, I slowly came to realize I was utterly obsessed and in love with it.” After launching a successful training program called “Snatched in Six Weeks,” and some encouragement from Keeler, Fisher found himself spearheading “this weird combination of business and fitness and theater. And that was how Mark Fisher Fitness became an actual business more than just one crazy dude in hot pants.”

The tenets of MFF emphasize nutrition (“You can’t out-train your diet,” Fisher says), recovery (“New Yorkers have no problem absolutely kicking the shit out of themselves several times a week, but sometimes it’s a harder sell to make sure they’re getting sleep”), and building a strong foundation of safe muscle movement. The latter principle, as Fisher points out, applies especially to theater actors or dancers in shows that could run for weeks or months. “If your body has limitations of movement, that is going to affect your ability to express whatever artistic choices you may have,” he says. Performers also tend to have longer careers if they know how to avoid injury.

Most important, though, is that spirit of inclusive fun. Unlike other gyms, MFF favors classes and semiprivate training over one-on-one sessions. “You have to take ownership of your own journey working with several people at the same time,” says Fisher. “When people find a gym and it becomes more of a community for them, they’re more likely to really make some sustainable behavioral change and actually make fitness an ongoing part of their life.”

A wellness center that doubles as a family proves particularly useful to actors. “You’re behind on your rent, and you just had a final callback for a new Broadway show, and you just blew your audition,” says Fisher by way of example. “We just get it. Painfully, we know what that’s like—just as we know what it’s like to celebrate when you get an amazing new job.” Such celebrations, of course, are likely to entail impromptu dance parties, unicorn onesies, and glitter.

“Leaving the [entertainment] industry, I was afraid of leaving that community,” he adds. “When you’re a performer...you make these little families for six weeks or three months or maybe a year, and you go about your way. Here, it’s sort of like the show that never has to close.”