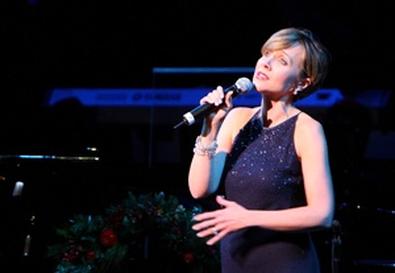 The exuberant revue mixes popular show tunes with traditional Christmas carols. In some instances, the songs cover both bases: holiday-themed songs from musicals, such as Jerry Herman's "We Need a Little Christmas" from "Mame" and Irving Berlin's "White Christmas." Funnyman Kudisch gets some of the choicest material, pulling out all the stops in a manic interpretation of Cole Porter's "Where Is the Life That Late I Led?" and "A Lonely Jew on Christmas," leading to a hilarious face-off—Kudisch's "Oh Hannukah Tree" in counterpoint to Denman's "Oh Christmas Tree." Kudisch's charisma and booming baritone are in fine form in "If I Were a Rich Man." However, Berg should consider jettisoning the bizarre unisex ensemble version of "Cell Block Tango" (from "Chicago") in favor of a different Kander and Ebb number: Kudisch belting a song from "Zorba."

Denman's skills as a crackerjack song-and-dance man flourish in his Gene Kelly–esque romp through "Singin' in the Rain" and his James Cagney–flavored tap number, "Give My Regards to Broadway." Calvert's finest moments come in her moving anecdote of landing the plum role of Grizabella in "Cats" just when she was giving up on getting a career break, leading into her showstopping delivery of Grizabella's haunting Andrew Lloyd Webber ballad, "Memories." Harvey boasts a resplendent soprano voice, showcasing it to spectacular effect in "The Phantom of the Opera" and Lerner and Loewe's "I Could Have Danced All Night." Rutherford delivers a bravura version of Jean Valjean's "Bring Him Home" from "Les Miz."

Salutes are also due for Berg's disarming between-song patter and piano accompaniment, as well as the contributions of Roger Cohen on drums and Mickey Hachey on bass. Those setting their expectations for a no-fuss evening of cabaret, rather than a blockbuster musical, will relish this tasty holiday treat.