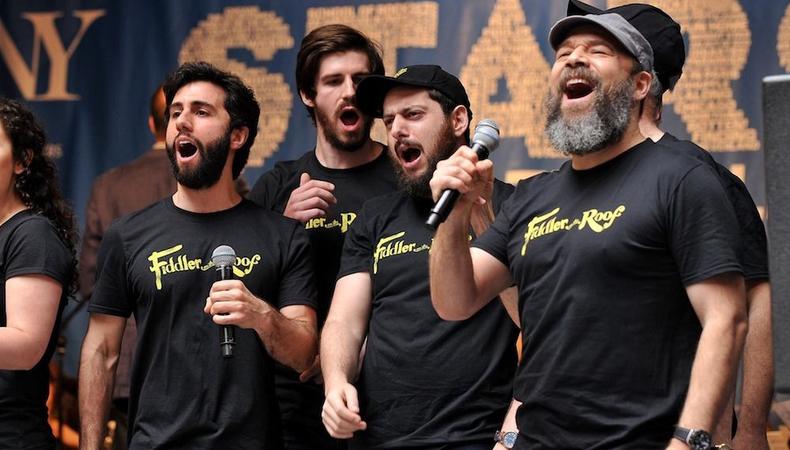 It’s finally June which means you’re likely either gearing up to spend the next three months soaking up every minute of sun, or are preparing for as much indoor time as possible until you can once again return to the outside world when temperatures have retreated to below 70 degrees. Whichever camp you fall into, this week we have events that will be to your liking. From a free outdoor performance featuring Broadway stars to Brooklyn’s biggest film festival, here’s what actors in New York should have on their radar this week.

Enjoy Broadway performances for free—in the street.
On June 2, Broadway’s biggest stars will be singing for their supper. Well, not really, but you’d think so when performers from hits including “Come From Away” and “Groundhog Day” take to the streets to sing in the iconic Shubert Alley for the annual Stars in the Alley. This year’s event will be hosted by “Unbreakable Kimmy Schmidt” star Tituss Burgess, with social media hosting duties handled by Brandon Uranowitz of “Falsettos” renown. Like years past, the event is entirely free and open to the public, and in true show biz nature, will go on come rain or come shine. (Free)

Nourish your inner bookworm.
Run free amongst your fellow bibliophiles when BookCon hits the Javits Center on June 3 and 4. The two-day festival, billed as the event where “storytelling and pop culture collide,” will have offerings for every genre-lover including panels, autograph sessions with authors, meet and greets, and screenings. Notable guests slated to attend include Kevin Hart, Bill Nye, Chelsea Clinton, Jeffrey Tambor, Chad Michael Murray, Krysten Ritter, Lemony Snicket, Marc Maron, Margaret Atwood, Matt Bomer, Tim Federle, and many others. (Tickets: $40–$45)

Attend the “Golden Globes of Theater.”
The Drama Desk Awards are often referred to as the Golden Globes of theater because, in the same way that television and film are both awarded in the latter, the former honors performances and shows from the realms of Broadway, Off-Broadway, and Off-Off-Broadway. This year’s ceremony, which will be held June 4 at New York’s Town Hall, promises to bring some added suspense, as many of Broadway’s front-running shows at the Tonys (“Dear Evan Hansen,” “Natasha, Pierre & the Great Comet of 1812”) are ineligible as they were in the running in their Off-Broadway incarnations in years past. (Tickets start at $64)

Celebrate five years of 54.
Midtown supper club Feinstein’s/54 Below has become a staple of the New York performance community, and you’re invited to celebrate its five years’ of existence with its All-Star Anniversary Concert on June 5. The evening will feature some of the many stalwart performers who have graced its stage over the last half-decade including Laura Benanti, Liz Callaway, Alice Ripley, Laura Osnes, Jason Danieley, and the man himself, Michael Feinstein. It’s definitely a treat-yourself event, but well worth it to have the chance to watch a roster of that talent level perform (plus, a portion of the proceeds will go to Broadway Cares/Equity Fights AIDS). (Tickets: $100)

A film festival grows in Brooklyn.
The Brooklyn Film Festival is back with its 2017 edition, bringing more than 120 film premieres to venues all over the borough. Spanning Williamsburg, Greenpoint, Bushwick, and beyond, this year’s lineup will carry out the festival’s mission to “provide a public forum in Brooklyn in order to advance public interest in films and the independent production of films,” and will kick off June 2 with screenings ongoing through June 11. (Tickets: $15)

Casey Mink
Casey Mink is the senior staff writer at Backstage. When she's not writing about television, film, or theater, she is definitely somewhere watching it.
END_OF_DOCUMENT_TOKEN_TO_BE_REPLACED